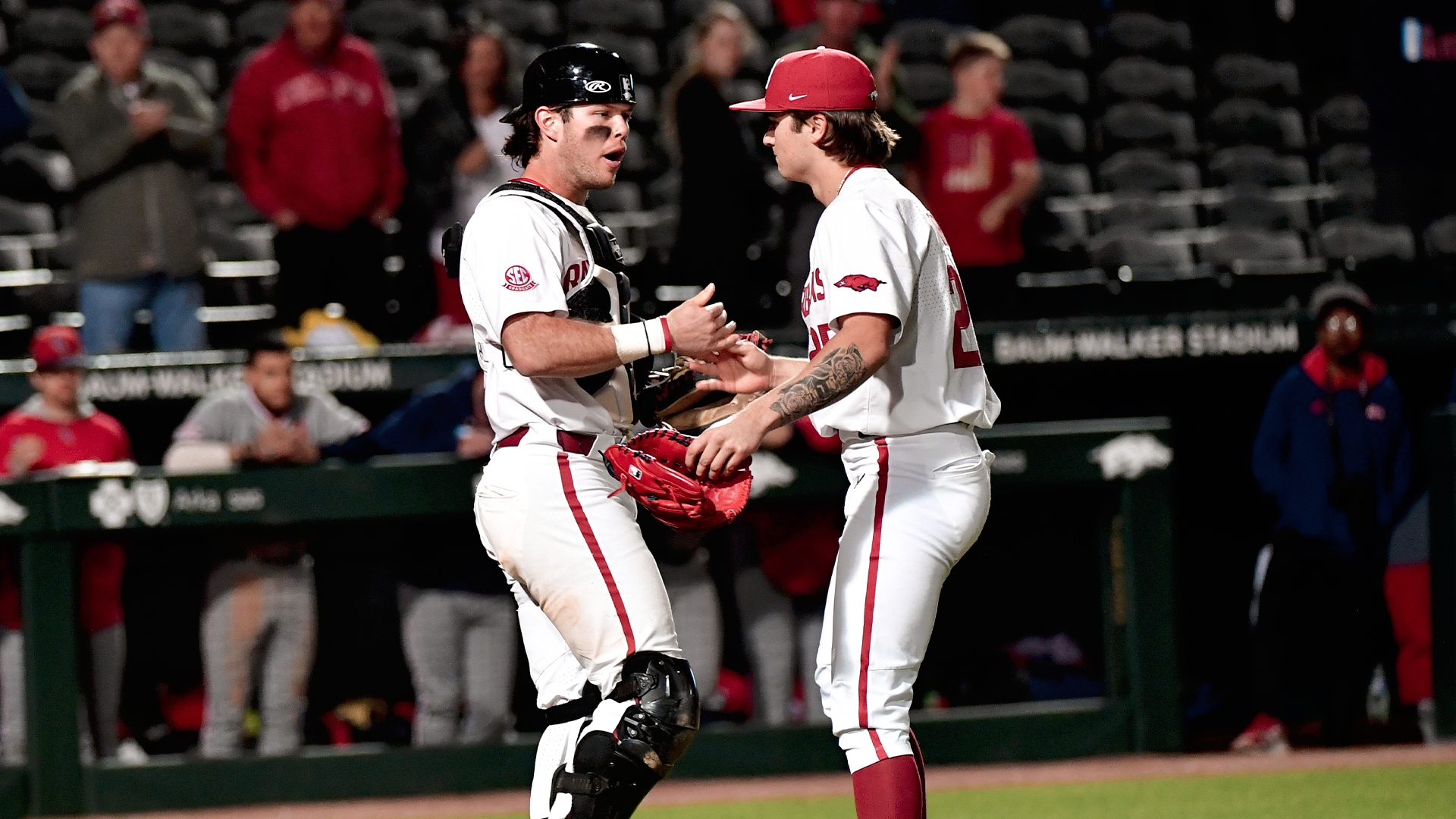 No. 3 Arkansas (9-3) kicked off its four-game weekend set against UIC (4-7) with a pair of victories, sweeping Thursday’s series-opening doubleheader at Baum-Walker Stadium. The Razorbacks took game one, 12-4, before pulling out a come-from-behind 5-4 win in game two of the twin bill.

Connor Noland displayed ace-like qualities in the opener, matching a career high with 11 strikeouts over 6 2/3 innings. The veteran right-hander allowed three runs on four hits and a pair of walks, silencing UIC for most of the night en route to his second win of the season.

The nightcap, meanwhile, featured numerous heroes, including Peyton Stovall and Michael Turner. The duo powered Arkansas’ four-run rally in the bottom of the eighth as the Hogs emerged from a three-run deficit to complete the doubleheader sweep.

Due to tomorrow’s anticipated snowfall, Arkansas and UIC will take Friday off before returning to action Saturday. First pitch is set for 2 p.m. on SEC Network+.

Game 1: Arkansas 12, UIC 4
Noland was sharp from the get-go, striking out the side in the top of the first to begin his outing. He then proceeded to shut out UIC over the next five innings of the ballgame.

The Razorback offense had Noland’s back. Arkansas put up a run in the bottom half of the first, using an RBI single by Chris Lanzilli to open an early 1-0 lead.

Arkansas did its most serious damage of the game in the bottom of the sixth, scoring six runs to extend the advantage to seven. Jalen Battles’ two-run blast, his team-leading third homer of the season, put the Razorbacks firmly in the driver’s seat.

UIC’s bats, however, woke up in the top of the seventh, tagging Noland for three runs and driving him from the ballgame. The Greenwood, Ark., native’s final line was superb despite the adversity, finishing with a career-best 11 strikeouts in his longest outing of the season.

Arkansas’ lead grew with homers by Brady Slavens and Cayden Wallace in the bottom of the eighth to put the game away for good. Evan Taylor (1.1 IP), Jake Faherty (0.1 IP) and Miller Pleimann (0.2 IP) closed out the final 2 1/3 innings after taking over for Noland, combining for three strikeouts while allowing a run.

Game 2: Arkansas 5, UIC 4
The second game of the doubleheader looked like it belonged to the Flames until the bottom of the eighth inning. Trailing by three, Arkansas put together a four-run rally to come from behind and secure its second win of the day.

Zach Gregory’s RBI double spurred the comeback, scoring Lanzilli from third and sending Battles to his spot. Battles then dashed home on a wild pitch before Stovall’s RBI single to right center tied the game at four.

Turner stepped up to the plate next and singled to right center on a 3-2 pitch, scoring Gregory from third and giving Arkansas the only lead it needed.

True freshman Austin Ledbetter, meanwhile, made his first career start on the mound, striking out three over three innings of two-hit, one-run ball. Arkansas’ bullpen did the rest, limiting UIC to three runs on four hits over the final six innings.