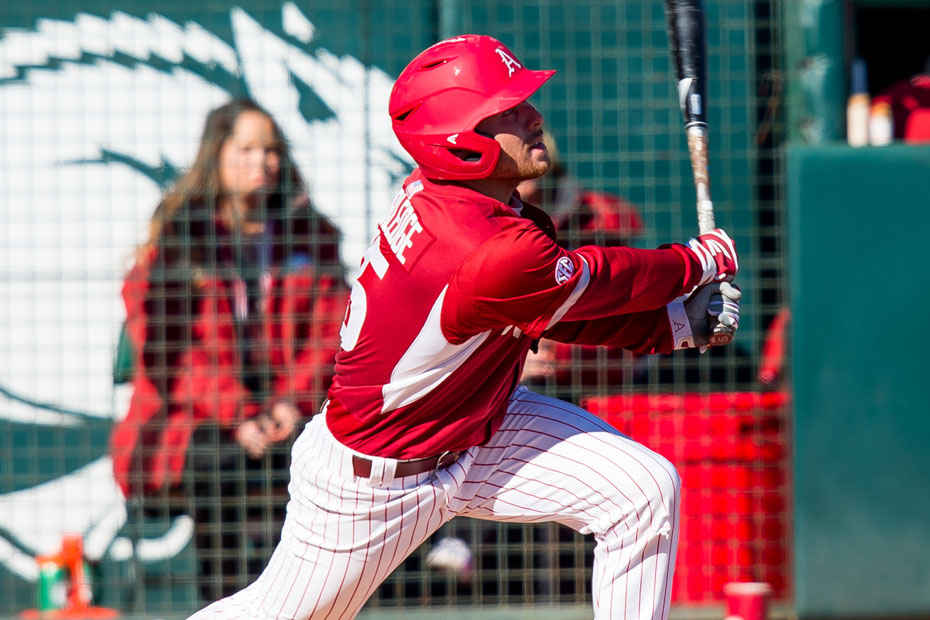 FAYETTEVILLE, Ark. – Arkansas scored eight runs in the third inning and starting pitcher Trevor Stephan held Bryant to just two hits over 5.2 innings as the Hogs cruised to a 13-7 win and the series victory Saturday afternoon at Baum Stadium.

For the second straight day, the Hog bats managed to scratch across eight or more runs in an inning and force the Bryant starting pitcher out of the game early. 12 batters came to the plate in the third inning and eight scored after Grant Koch, Dominic Fletcher, and Jax Biggers all provided doubles that got the inning going. It’s the second straight day that Arkansas has batted around in an inning and third game this year with six or more runs scored in a single frame.

Junior pitcher Trevor Stephan had another strong game on the mound, giving up no runs and two hits through 5.2 innings, while striking out a season-high six batters. He picked up his second win in as many starts to go to 2-0 on the year. It was the longest outing by a Razorback starting pitcher so far this season.

Senior Jake Arledge had his best day at the plate, going 3-for-4 with a home run and three runs scored. The three hits tied a career-high and he hit his first homer of the year in the seventh inning over the left field wall to pad Arkansas’ lead to 12-3 at the time.

Freshman Jordan McFarland also turned in a nice day at the plate, going 2-for-3 with a run scored and two walks. He is the ninth Razorback to record a multi-hit game this season.

Moments That Mattered
Arkansas got the bats going early in the second inning as redshirt junior Carson Shaddy delivered his first home run of the season with a two-run shot down the right field line. The Razorbacks have hit seven home runs as a team through the season’s five games, which is good for fourth in the SEC.

The Hogs padded their lead in the third with two more runs, chasing Bryant starting pitcher Steve Theetge after doubles by Grant Koch and Dominic Fletcher to make it 4-0. Koch has been, arguably, Arkansas’ best hitter through the season’s first five games as he’s hitting .320 with five extra-base hits and a team leading two home runs.

Six more runs crossed the plate after Fletcher’s double to make it 10-0 Arkansas at the end of the third. After Jack Ipsen replaced Theetge on the mound for Bryant, Biggers hit a bases-loaded double followed by RBI singles by Jaxon Williams and Arledge.

Bryant tried mounting a late-inning comeback as Arkansas had to go to its bullpen. Three runs crossed the plate in the seventh and fourth in the eighth to make it 12-7, but the Hogs finally shut the door with a single run in the bottom of the eighth and a scoreless ninth inning from Cannon Chadwick.

Chadwick has been one of Arkansas’ best arms out of the bullpen as he’s made three appearances this year and has yet to give up an earned run in 4.1 innings, while striking out nine.

Razorback Quotables
“I thought he threw really well. His fastball was good. It was around the zone the whole game. There was a couple at-bats where he got down 3-0 and struck out a hitter. I thought, overall, he threw the ball extremely well. He threw the breaking ball well. He has a changeup that he didn’t have to throw a whole lot because we had a lead. It was better than his first outing I think.” – Head coach Dave Van Horn on Trevor Stephan’s performance

“It went pretty well. I felt I had good command of the fastball today, which helped a lot. I was just attacking early.” – Trevor Stephan on his outing

“It was a hanging slider. First pitch, I was gearing up for a fastball. I checked swung and he called a strike. He came back with a fastball and it caught the inside of the plate. Then I saw him shake and I thought he was going to shake to an off-speed. I looked kind of foolish with a slider, earlier, and sure enough it was a slider and I hit pretty good.” – Jake Arledge on his seventh inning home run

Up Next
Arkansas and Bryant will conclude their series on Sunday as the Hogs will try to go for their second sweep in as many weekends. First pitch is slated for 1:02 p.m. at Baum Stadium and will be televised on SEC Network+.