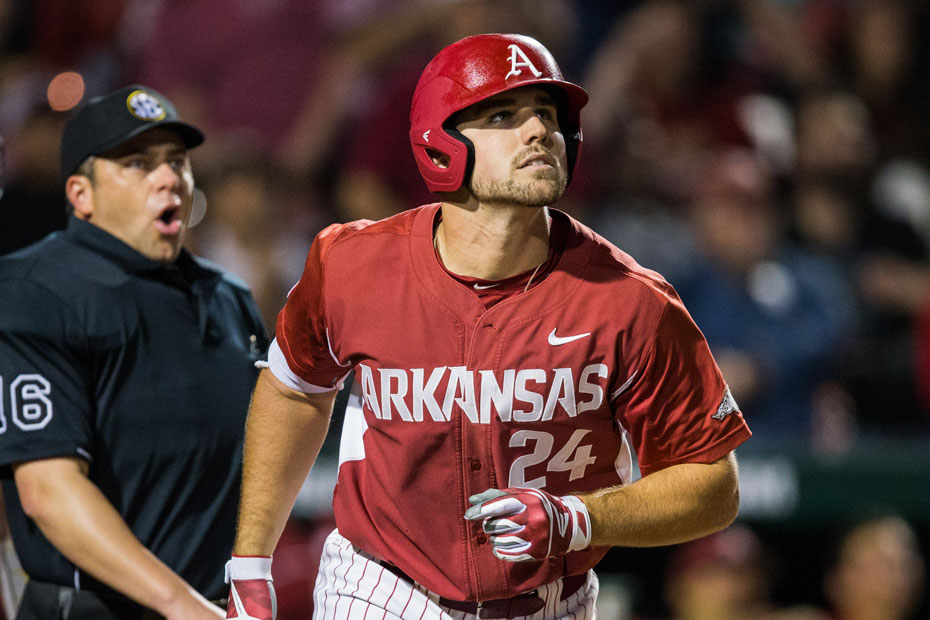 Hogs Use Home Run Ball To Take Series From MSU

Juniors Carson Shaddy and Chad Spanberger both hit home runs in the same inning that put the Hogs ahead and then added to their lead. The long balls helped the Razorback offense explode for a five-spot, forcing Bulldog starting pitcher, Peyton Plumlee out of the game after just 1.2 innings.

Shaddy finished the game 2-for-3 at the plate with two RBIs and a walk. Spanberger’s home run was his only hit of the night, but it was a big one as it brought home the final three runs that Arkansas scored in the game.

Junior starting pitcher Trevor Stephan was sharp through 6.1 innings, scattering seven hits and allowing just two earned runs with one walk, while striking out eight Bulldog batters. The outing earned him his fourth win of the year, keeping him undefeated. In his last four starts, Stephan has pitched at least five innings and struck out six or more. In his last three starts, the strikeout total has been eight or more. Stephan continues to lead the team with a 1.19 ERA and 40 strikeouts over 30.1 innings.

Senior Cannon Chadwick earned his second save in as many days. With the bases loaded and only one out, Chadwick was brought into the game to try and hold a two-run lead. Mississippi State did get one run on a sacrifice fly, but the senior struck out the next batter he faced to get out of the jam and then struck out four of the last six Mississippi State batters in the eighth and ninth innings to shut the door.

Moments That Mattered
Mississippi State took its first and only lead of the game in the top of the second inning, scoring one run off Stephan on just two hits. But the Razorbacks responded in a big way in the bottom half with its five-run outburst, getting the homers from Shaddy and Spanberger.

Shaddy delivered his bomb into the left field bullpen one batter after Dominic Fletcher reached with a leadoff single. It was Shaddy’s fourth home run of the year.

Spanberger’s homer came at an opportune time later in the inning when Arkansas continued to put runners on. Spanberger took a 2-2 pitch from Plumlee and hit it well over the right field bullpen to send Baum Stadium into a frenzy and give his team a 5-1 lead. Spanberger now has three home runs on the year, part of 29 home runs combined that Arkansas has hit this year, which continues to lead the SEC.

Razorback Quotables
“It’s like I told the team, It’s great that we won the series, but we still have a game to go and they all count. At the end of the year, you don’t want to say you took a day off. They’re going to give us our best shot tomorrow. It feels good to win the series, but it hasn’t been easy, obviously. Both games could have gone either way. I just feel fortunate that we did a good enough job. We put together one big inning today. I think we’ve scored eight runs and they’ve all come from home runs. We’ll take them any way we can get them.” – Head coach Dave Van Horn on winning the series

“We have two (pitchers) that have proved they can get well into games. You see teams and we’ve played some good ones. You compare SEC teams coming into this weekend and Mississippi States lineup is as good as we’ve seen.” – Head coach Dave Van Horn on his starting pitching

“We are excited. Everyone in the locker room, it’s a different atmosphere from last year. We are having a lot of fun and we are really excited.”– Cannon Chadwick on the team morale

“First off, I want to say thanks to our fans, because it was a fun atmosphere to come out and pitch to. They hyped me up, honestly. The first couple of innings, I had my good fastball going and I was commanding it pretty well. My slider wasn’t as sharp as my previous outing.” – Trevor Stephan on his strong outing

Up Next
Arkansas and Mississippi State finishes off the series on Sunday with the third and final game at 1 p.m. at Baum Stadium. The game will be televised online only on SEC Network+ and on the radio on the Razorback Sports Network.