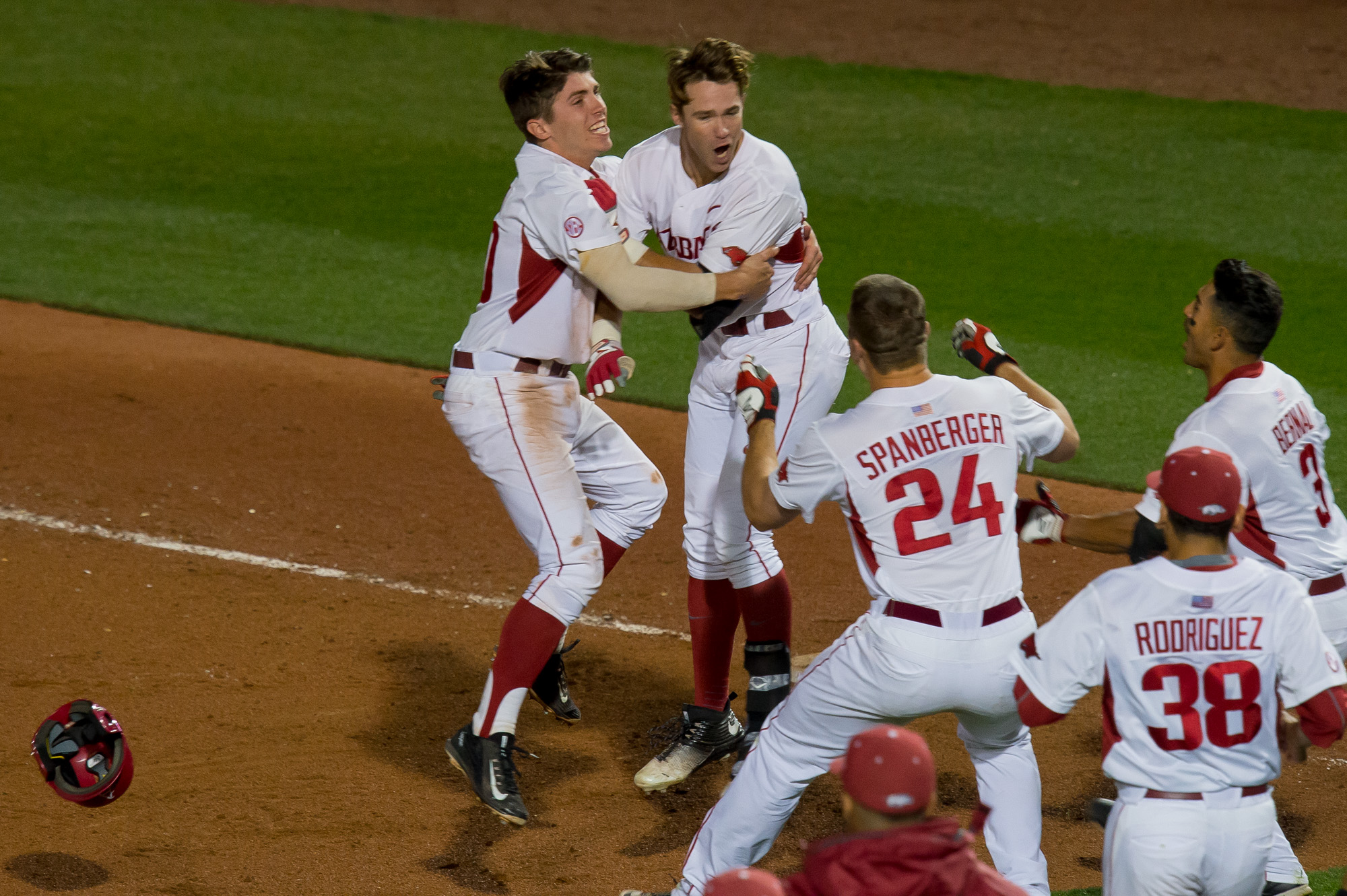 FAYETTEVILLE, Ark. – Luke Bonfield’s RBI single in the bottom of the ninth gave the 18th-ranked Arkansas baseball team a 3-2 victory over Auburn Friday night at Baum Stadium, Arkansas’s first conference victory of the year and third walk-off win this season.

Bonfield’s single was set up perfectly earlier in the inning after Jake Arledge led off the frame with an infield single, followed by a double down the right line by Rick Nomura. Nomura, who was trying to put down the sacrifice bunt earlier in the at-bat, pulled a 2-2 pitch just over the head of the first baseman, putting the winning run on third base for Bonfield.

The hit was Bonfield’s only one of the night as he went 1-for-4. Nomura and redshirt sophomore Carson Shaddy were the only Razorbacks with multi-hit performances Friday, each notching two hits a piece. For Shaddy, it’s his team-leading 10th multi-hit game of the year and Nomura’s fourth of the year.

The Hogs, who were in desperate need of a win following a sweep at the hands of South Carolina last week, gutted out a good win over hot-hitting Auburn team that had the two leading hitters in the SEC in Anfernee Grier and Joshua Palacios. The Razorback pitching staff held both batters in check all night as the two Tigers combined to go 0-for-7 in the game.

Junior Josh Alberius, who was brought in to pitch in the seventh inning, picked up the win after finishing out the game with a career-high five strikeouts, all on the last five batters he faced. Making his eighth appearance this season, Alberius has been one of Arkansas’s best out of the bullpen. Tonight, he gave up no runs and no hits over 2.2 innings and walking just one. Over those eight appearances, Alberius has only given up two earned runs, both occurring back against Gonzaga on March 9.

What seemed like a pitcher’s duel on the box score, wasn’t so on the field Friday night in Baum Stadium. Arkansas starting pitcher Dominic Taccolini was not able to get out of the third inning after he allowed two runs on four-straight hits, both runs coming from a Blake Logan double and a Daniel Robert single.

The Razorback bullpen of James Teague and Jordan Rodriguez hung tough over the middle innings as Auburn continuously put runners in scoring position, but was never able to bring more home and build their lead. As a team, the Tigers left 14 runners on base Friday night, half coming in the third, fourth and fifth innings. The 14 runners left on tied the season-high for Auburn.

Arkansas finally broke through Auburn starter Justin Camp in the sixth inning after Shaddy walked and then Cullen Gassaway doubled into the left-centerfield alley. Shaddy was able to score all the way from first to cut the lead in half, and was followed by a Nomura single to the exact same part of the field to tie the game at 2-2.

Klobosits had held the Razorbacks hitless until the ninth before giving up all three hits for the Hogs’ game-winner.

Arkansas and Auburn return to the field on Saturday for game two of the series as the Hogs will go for the series victory. First pitch is set for 6 p.m. and will be broadcast on SEC Network+.

“Great job by our team hanging in there; it almost got away from us in the third. Down two, bases loaded, no outs, we get a soft line drive to second and then a double play ball. We were in the dugout feeling pretty good, maybe things will start changing our way. We walked too many people. We hit a couple, we just kept getting out of jams. The game really started settling down the last four innings. Teague was a little wild but he found a way out. Alberius, that’s the best I’ve seen him. He gave our offense time to get it going.” – Dave Van Horn opening statement

“We sent him up there, the pitcher was throwing 90-95 mph. He went 2-2 and we were stealing on the pitch, and he hit it in the hole. Easy opportunity to get to third base and that was a key, getting that runner in scoring position.” Van Horn on Nomura at bat in ninth

“It was huge, that’s all I said out there. I didn’t know if we were going to win or lose the game. I know one thing, we were playing hard. We were determined to try to win the game. They were fighting hard, even when it didn’t look good early. That’s a good offense over there, a really good offense.” – Van Horn on rebounding from last weekend

“That’s the best feeling. I missed the two bunts then Coach Van Horn gave me that look; I’ve seen that look before and it is not a good look to get from Coach Van Horn but you just have to stay calm and do what you can to control. Good things will happen.” – Rick Nomura on his double in the ninth.

“I was kind of looking to see if they would intentionally walk me but when the catcher didn’t stand up, I was like ‘alright, time to go to work.’ I thought they were going to pitch me pretty carefully so I was just looking right-center field approach and it worked out.” – Luke Bonfield on his walk-off base hit.

“It was huge. We had a tough series at South Carolina and coming back with a walk-off win is huge for us. A lot of good vibes going into tomorrow.” – Rick Nomura on the win.