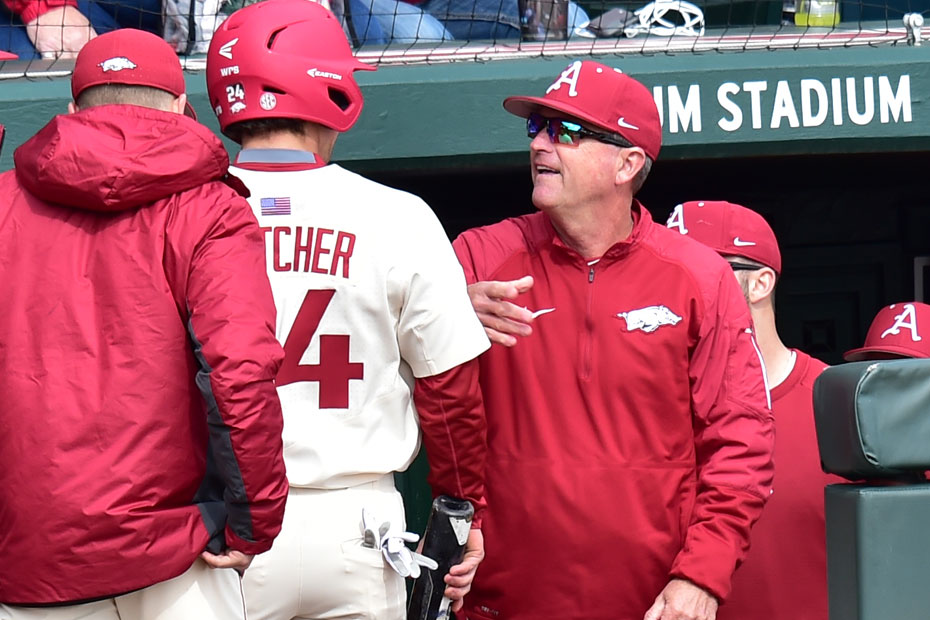 SAN DIEGO, Calif. – The third-ranked Razorback baseball team was able to score three times in the ninth inning, while sophomore Matt Cronin was perfect over the final four innings on the mound to help the Hogs defeat San Diego State, 5-2, Saturday night in the Tony Gwynn Legacy.

The victory was the 600th win for Dave Van Horn as the Razorbacks’ head coach, making him one of only three head coaches in the Southeastern Conference with 600 or more wins at their current school. Overall, Van Horn has 971 wins as a Division I head coach, good for eighth most among all active coaches.

With the game tied at 2-2 going into the ninth inning, Arkansas (5-1), amazingly, was able to bat around the order without securing a single hit. With the benefit of four walks, an error, a hit by pitch, and a sacrifice fly, three runs crossed the plate as San Diego State’s (4-2) bullpen struggled.

Arkansas’ offense struggled, as well, as hits were at a premium, but it did draw nine walks, its third game this year with nine or more free passes. Jax Biggers and Eric Cole were the only players to record a hit as Biggers finished the game 2-for-4 with a double, an RBI, and a run scored. Cole’s only hit came on a game-tying solo home run in the sixth, his second long ball of the season.

On the mound, Isaiah Campbell made his second start of the year and, once again, was strong through five innings, allowing just one earned run and matching his career-high with seven strikeouts on 90 pitches. Through his two starts in 2018, Campbell leads all Razorback pitchers with 14 strikeouts in nine innings with just three walks.

Cronin ended up earning the victory as he retired the final 12 batters in order, striking out five in the process. It continues a streak of good play not just from Cronin, but the entire Arkansas bullpen in the early part of the year. Through the first six games, the Razorback relievers have a combined 1.38 ERA with 30 strikeouts and have held opponents to a .151 average. Cronin has two victories out of the bullpen this year and also one save.

Moments That Mattered
Arkansas got a quick start to the game with a lead-off double in the first inning by Biggers, his first extra-base hit of the year. He later scored on a sacrifice fly by Dominic Fletcher to give Arkansas the 1-0 lead.

San Diego State later tied the game in the third as a throwing error by Biggers led to Denz’l Chapman scoring after his lead-off triple.

Both teams added a single run in the sixth to make it 2-2. Arkansas’ run came off Cole’s homer, which led off the inning. The junior was first-pitch swinging and sent a moonshot well over the right field wall for Arkansas’ second homer of the week.

The ninth inning was when things got interesting. After Jared Gates walked to start the frame, San Diego State brought in its second reliever of the night in Adrian Mardueno. In the first at-bat after the change, Grant Koch walked to put two on with no outs.

Arkansas’ nine-hole hitter Casey Martin came up after Koch and tried to get a sacrifice bunt down to move the runners. He was successful in getting the bunt down and was also able to reach second safely as SDSU third baseman Casey Schmitt threw the ball away and allowing Arkansas to score the go-ahead run, making it 3-2.

The Hogs added two more runs on a sacrifice fly by Biggers and later on a bases-loaded walk to Heston Kjerstad.

Up Next
Arkansas finishes up its’ week on the West Coast as it will face San Diego on Sunday at Fowler Park. First pitch is scheduled for 12 p.m. CT and will be televised on Cox Sports.