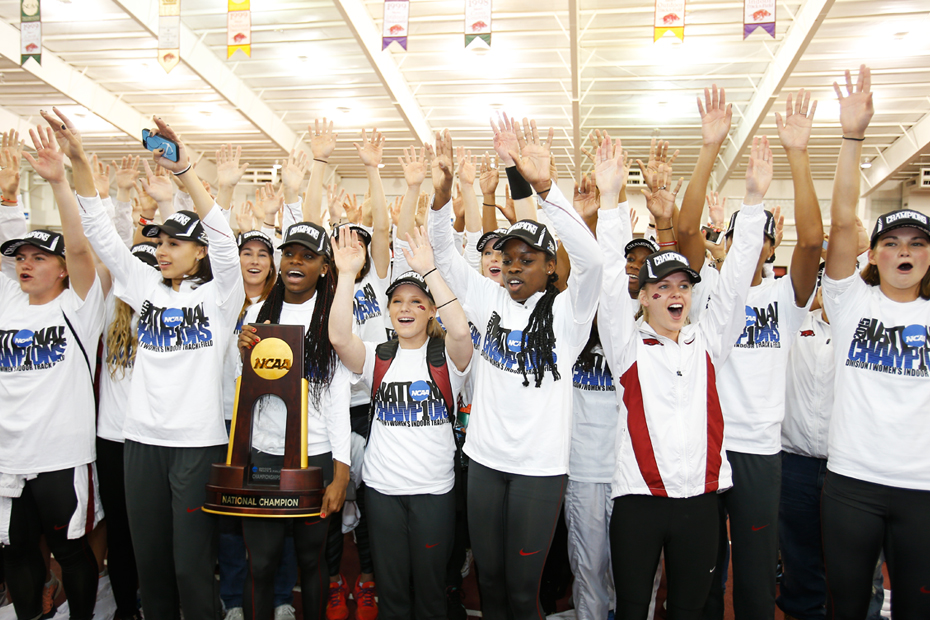 Home Of Champions And Championships

On Tuesday, the NCAA will announce pre-determined championship sites for a variety of sports for 2018-22. The University of Arkansas has submitted bids to host a number of different events including in cross country, indoor and outdoor track and field, gymnastics and men’s and women’s golf. Before the latest round of championship events are announced, ArkansasRazorbacks.com provides a little history of the University of Arkansas’ rich championship hosting history.

“Hosting championship events at the University of Arkansas is a source of pride for our program and for our university,” Vice Chancellor and Director of Athletics Jeff Long said. “Our student-athletes have the opportunity to compete for conference and national championships in front of the Razorback fans in some of the nation’s premier collegiate competition venues. The championships also have a tremendous economic impact on the region filling hotels, restaurants and supporting local businesses.”

“The Randal Tyson Center has quickly become the standard for indoor track and field,” Long says. “Collegiate and professional athletes from around the world want to come to Fayetteville to compete on the world’s fastest indoor track. Since it opened its doors in 2000, outside the Olympic Games, the Randal Tyson Center has arguably played host to more elite track and field athletes than any other venue.”

“We have really embraced a philosophy of hosting more championship events,” Associate Athletic Director for Event Management Chris Pohl says. “That means looking across the broad spectrum of sports that we sponsor here at the University of Arkansas. We believe we have championship caliber teams and facilities and because of that we should be going after these championships. What better way to culminate your career than being able to stay home in your own backyard and being able to compete at the highest level during a championship.”

Long before student-athletes, coaches, officials and visitors arrive in Northwest Arkansas, a dedicated team of Razorback athletic department staff members, part-time workers, volunteers and community organizers, work together to make the championship experience a rewarding one. From organizing hospitality areas to providing participation gifts, the championship team works to provide every participant with fond championship memories regardless of the results of the competition.

“Certainly the moment they step off the plane or arrive in our region, we try to do what we can do to make sure they understand this University and community is embracing the championship,” Pohl says. “It is a culmination of the career and achievements for our student-athletes. It is the pinnacle. We try to do every event in a championship caliber way. So whatever we can do to make sure our student-athletes and the visiting student-athletes get to experience that and get to create memories for a lifetime that is what our goal is.”