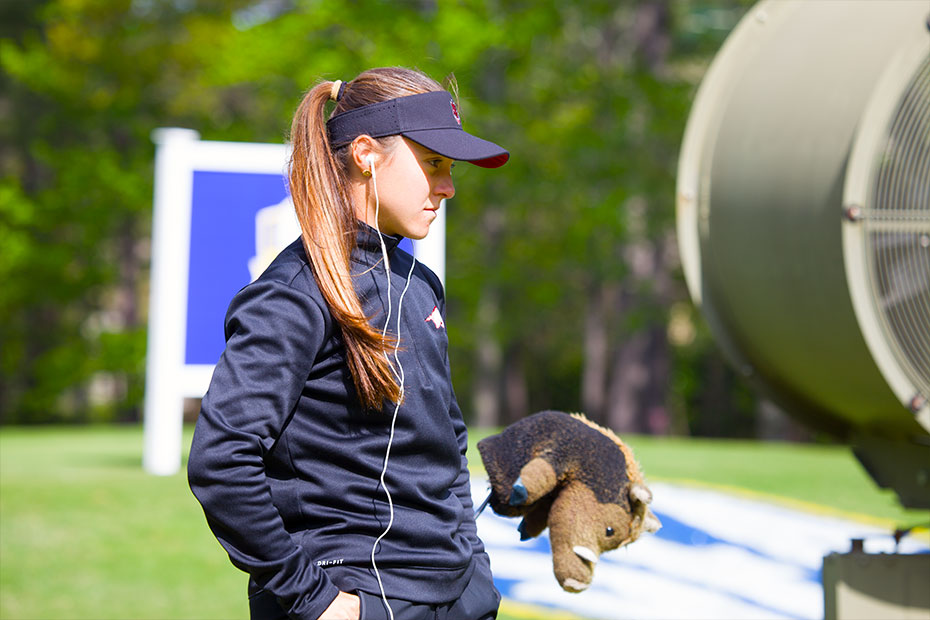 GUADALAJARA, Mexico – Arkansas Women’s Golf is in ninth place with nine holes left to play after day two at the IJGA Collegiate Invitational. The Hogs carded a 292 (+4) in round two, and are one-over as a team through nine holes in round three. The final nine holes of the tournament will be played tomorrow morning. Overall, the Hogs are at 10-over, four strokes behind Stanford and Maryland, who are tied for seventh.

Junior Maria Hoyos had herself a career day, firing a career-best 67 in round two at the IJGA, including an eagle on hole seven from 156 yards out. Hoyos also played a round of 67 at the Evans-Derby experience during her freshman season (3/18/18). Hoyos is currently at one-under through nine in round three, and two-under overall, eight strokes behind the leader. She is tied for eighth place on the individual leaderboard.

Following behind Hoyos is freshman Julia Gregg, who played a rock-solid 73 in round two after playing a round-one 71. Gregg is currently two-over through nine in the final round and two-over for the event, good enough for a share of 26th place.

Redshirt sophomore Brooke Matthews is currently in the third spot for the Hogs, as she is seven-over for the tournament. That is good for a share of 44th place with nine holes left to play.

Kajal Mistry and Ximena Gonzalez close out the Hog lineup, as they are 11-over and 12-over, respectively. Mistry fired a second round 75, while Gonzalez is one-under through her third round so far.