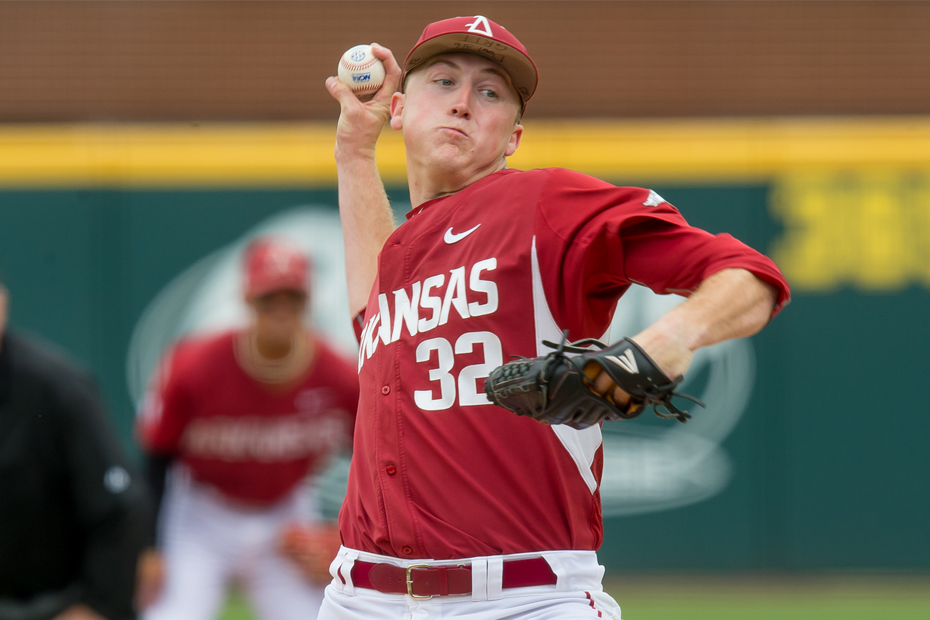 FAYETTEVILLE, Ark. – Junior pitcher Zach Jackson pitched a phenomenal 5 1/3 innings Saturday afternoon against the 2nd-ranked Florida Gators, throwing a no-hitter into the sixth inning. However, he ran into trouble in the sixth, allowing a run to score off a hit by pitch before getting pulled with the bases loaded.

Jackson struck out five Florida batters through the first five innings, which was the longest start by an Arkansas starting pitcher since Jackson went five against No. 14 Ole Miss last week. His two five-inning outings are the longest in the last 13 games by any Razorback starting pitcher.

Unfortunately, Jackson had to take the loss in Saturday’s game to drop his overall record to 2-4. Jackson finished with 4 earned runs allowed on just 1 hit with 4 walks and 5 strikeouts.

Florida’s starting pitcher Alex Faedo garnered the win to move to 7-1 this season. Faedo struck out 10 batters, while allowing just 1 earned run on 5 hits with 2 walks.

Senior catcher Tucker Pennell had the lone RBI hit for the Razorbacks, lacing a double off the left field wall in the seventh to cut the lead down to five. Pennell also threw out three would-be base stealers in the game, a new season-high and tying a career-high. The catcher now has 22 caught stolen bases this season, which continues to lead the SEC.

Senior Michael Bernal went a perfect 3-for-3 in the game, scoring the one Razorback run after a lead-off double in the seventh inning. Bernal now has 11 multi-hit games this year and 33 for his career. It was also his second three-hit game of the season.

“That was a pretty good game up until the sixth inning. I felt that the players were into it and they played hard, but the game got away from us in the sixth. I was happy to see Zach Jackson throw the ball as well as he did. In the sixth he gave up a lead-off single. The walks are what come back to get us. We got our hits, but the issue arises with timely hitting.” – Dave Van Horn on the outcome of Saturday’s loss to Florida

“We will hold it together win or lose. The players are working. We have time for a bit of practice, but we are going to begin to prepare for our matchup against Creighton. We then immediately turn around to play Kentucky, a team in the upper echelon of our league. We know what we have up against us. At this point, our goal is to play our best baseball and win one game at a time. With some of our players our discussions revolve around finishing strong. With others we are discussing next year and getting bigger, stronger, and better. With the remainder of the season, some of the younger player may get to see the field more often not because we have checked it in, but because they deserve it. Some of the younger guys are swinging the bat well and it may be the best instance to get them some more playing time in an effort to turn this around and in preparation for next season.” – Dave Van Horn on the goals of the team moving forward

“I felt really good today. I just came out and I could tell when I was getting loose before the game that I could really feel all three of my pitches. I just kind of gassed at the end and lost a lot of control. I was probably trying to overthrow too much and it ended up costing us big time.” – Zach Jackson on his outing

“We put ourselves in a good situation, guys got on in front of me and I had a chance to do something as well and I happened to walk early on. We had a pretty good situation early in the game, Zach (Jackson) was doing a phenomenal job of keeping us in it. We had two, I wouldn’t say, bad at-bats. The first one might have been a little quicker than we expected but those are those situations on both sides of the game that we need to create a different outcome. Whether it’s on the pitching side, it’s make a pitch, or on the offensive side, it’s get that hit. Like Zach said, we are right there. No one is losing their minds over it, but it is definitely frustrating and encouraging us to work even harder. It is definitely bringing us closer together because we are all we have right now. We are putting ourselves in good situations, we just need to come through.” – Michael Bernal on the missed opportunities

-Pennell continues to lead the SEC in caught stolen bases with now 22 on the year.

-Michael Bernal tied a season high with three hits on the day as part of his 3-for-3 day with one double.

The Razorbacks dip back into non-conference play Tuesday for a single game against Creighton. First pitch at Baum Stadium is set for 6 p.m. CDT