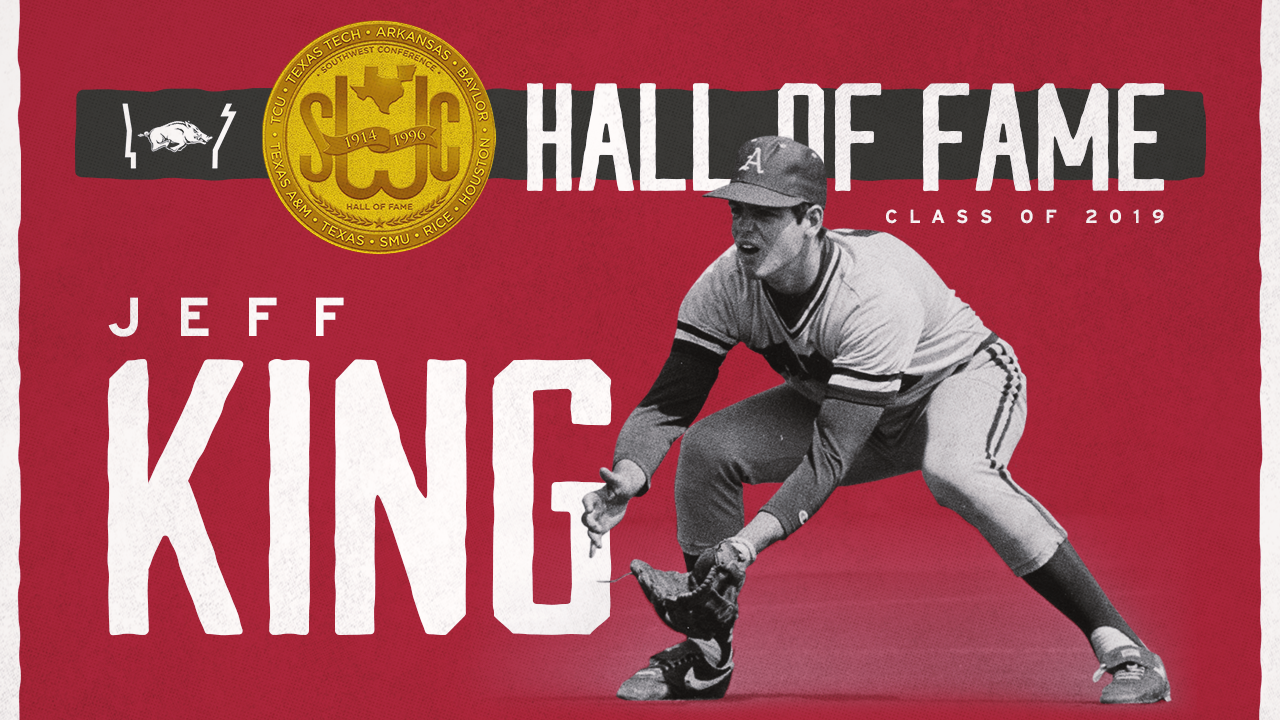 FAYETTEVILLE, Ark. – Former Razorback baseball All-American and MLB first overall draft pick Jeff King will be among nine honorees inducted into the Southwest Conference Hall of Fame on Monday, Nov. 18, 2019 in a luncheon at the Brown-Lupton University Union on the TCU campus in Fort Worth, Texas.

Hosted by the Texas Sports Hall of Fame (TSHOF), the event will honor King as well as other legends from schools previously affiliated with the Southwest Conference.

“Jeff King is a former No. 1 overall draft pick and among the best players to ever take the field for Razorback Baseball,” University of Arkansas Vice Chancellor and Director of Athletics Hunter Yurachek said. “Jeff was instrumental in helping lead Arkansas to tremendous success both in the Southwest Conference and on a national stage before embarking on an 11-year Major League Baseball career. We look forward to celebrating with Jeff and his family this November as he is inducted into the Southwest Conference Hall of Fame.”

Hailing from Marion, Indiana, King is a member of the University of Arkansas Sports Hall of Honor and spent his Razorback career over the 1984, ’85 and ’86 seasons that helped catapult Arkansas Baseball back to the national stage and including a trip to the College World Series in 1985. King was an All-America selection all three seasons in a Hog uniform and still holds the third-highest batting average over an Arkansas career, hitting .372.

King was an All-Southwest Conference (SWC) selection in 1985 and ’86, as well as making the SWC All-Tournament Team as a freshman and sophomore. He was a key part of Arkansas’ run to the 1985 CWS where he had 93 hits, 26 doubles, 17 home runs and 82 RBIs. The RBI total still stands as the single-season record in school history. King went on to be named to the 1985 CWS All-Tournament Team where Arkansas reached the semifinals for the second time in program history after wins over South Carolina and Stanford.

After his junior year, King entered the MLB Draft and was taken as the No. 1 overall pick by the Pittsburgh Pirates. At the time, he was the second first-round draft pick in school history, following Kevin McReynolds, who was taken sixth overall by the San Diego Padres in 1981. However, King still remains as the only first-overall pick in Arkansas history and one of eight first-round draft picks.

“In 2019 we have yet another outstanding group of student-athletes who exemplify what made the Southwest Conference so great; these elite athletes represented their schools with distinction,” said Cooper Jones, the President & CEO of the Texas Sports Hall of Fame. “The Southwest Conference Hall of Fame exists to honor a proud tradition of excellence in sports in the southwest.”

Please contact Krista Martin at krista.martin@tshof.org or (254) 756-1633 to order tickets for the Fort Worth induction luncheon.

For more information about the Southwest Conference Hall of Fame or the Texas Sports Hall of Fame please visit www.tshof.org.