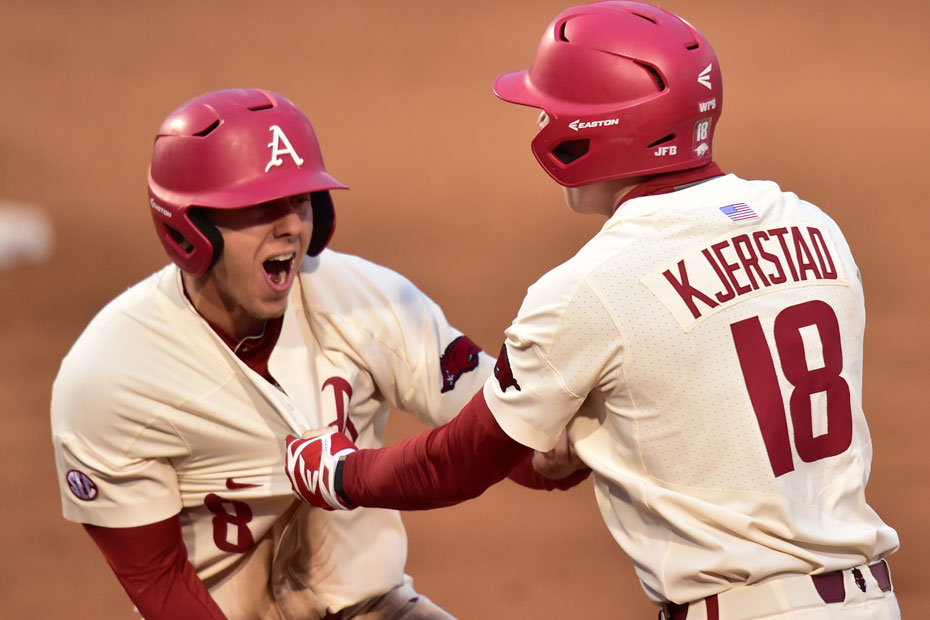 FAYETTEVILLE, Ark. – Even after striking out three times earlier in the game and with only one hit prior for the whole weekend, freshman Heston Kjerstad came up big on Sunday with the walk-off single in the bottom of the ninth to help the No. 5 Arkansas Razorbacks defeat the No. 13 Auburn Tigers, 5-4, completing the three-game sweep.

Arkansas (24-9, 8-4 SEC) had already completed the four-run comeback after tying the game in the bottom of the seventh and then got two on in the bottom of the ninth as Carson Shaddy and Eric Cole both walked. As Kjerstad stepped up with two outs, the Amarillo, Texas native laced a 2-1 pitch back up the middle to easily score Shaddy from second.

It’s the third walk-off win for the Razorbacks this year and second of the week. Arkansas beat ULM in 10 innings on Tuesday winning on a walk-off error for the 10-9 victory. Sunday’s win over Auburn (23-10, 4-8 SEC) was also the Hogs’ sixth by one run this year and 11th one-run game overall.

Arkansas now sits at 8-4 in conference play, one game ahead of Ole Miss in the SEC Western Division, which suffered a series loss to in-state rival Mississippi State this weekend. The weekend sweep also marks the first time since joining the SEC that Arkansas has won its first six home conference games and first time overall since 1990.

The Hitting
Junior Eric Cole had the big day at the plate, going 2-for-4 with two RBIs and a run scored to lead all Arkansas hitters. His two-out two RBI single in the bottom of the seventh tied the game at 4-4 and was one of only two hits in the inning. Cole now leads all Razorback hitters with 13 multi-hit games this year and he also has six multi-RBI games.

Cole finished the series 5-for-14 (.357) with a double and four runs driven in. He currently has 24 RBIs on the year, tying for third on the team and just one less than he had all of last year.

Aside from Cole, five other Razorbacks tallied one in the hit column on Sunday. Carson Shaddy and Dominic Fletcher both extended their hitting streaks to four games, while Casey Martin doubled home a run in the fourth and Jared Gates singled as part of the two-run seventh.

For the weekend, Arkansas hit .310 as a team, but only hit one home run, courtesy of Luke Bonfield in Friday’s 2-1 win. The Hogs still have 56 home runs on the season, good for best in the SEC.

The Pitching
Redshirt sophomore Isaiah Campbell earned the start on Sunday after taking last week off. He struggled in the second inning, giving up three earned runs on six hits, but struck out four and didn’t give up a walk on 44 pitches.

After Dave Van Horn went to the bullpen for the start of the third inning, he never had to make the call a second time as junior Jake Reindl was back to form. The Fayetteville, Arkansas native was nearly spotless over the final seven innings, giving up just one run on one hit, while striking out a career-high nine batters.

Reindl, who had scuffled for much of this season, came into the game with a 5.62 ERA in 16 innings over nine appearances. The numbers didn’t matter as he showed why he was one of the best pitchers in league play last year, retiring the final 18 batters he faced en route to his second victory of the year.

Combined, Arkansas needed only six pitchers for the entire Auburn series, using two each day. Over the three games, Arkansas pitchers compiled a 2.33 ERA, walking only five, and holding opposing batters to a .196 average.

Razorback Quotables
“We’d been talking all week about needing Jake Reindl and he showed up in a big way. He continued to get better as the game went on. He gave us a chance to start chipping away and win the game. He was huge. He hasn’t pitched that well all year. Today was last year’s Jake Reindl. He’s a guy that can throw the fastball 89-93 with a breaking ball, a changeup, all different kinds of looks and arm slots. It was huge for us.” – Head coach Dave Van Horn on Jake Reindl’s performance on the mound

“I thought he did a great job. I told him he was going to get another at-bat in this game after his third strikeout and it was going to be the biggest at-bat. That’s what we always tell the guys when they’re struggling a little bit or having a bad game, it’s always about ‘the’ at-bat.” – Head coach Dave Van Horn on Heston Kjestad coming through after struggling all game

“We had a long talk in the outfield after the game, I told them to enjoy this Sunday night off. Every game is important from here on out. We didn’t talk about us winning the league right now, but there’s a lot of schedule left. We hung in there after two tough game threes on the road. For us to come back and have a 5-0 week was huge. I reminded them on Tuesday night when we came back to win in 10 against ULM, we earned that win. It really got us going to have a perfect week.” – Head coach Dave Van Horn on responding well after a tough start to the conference schedule

“I was just trying to hit something hard and go through my normal routine. I just wanted to get that winning run in for my team to finish off the sweep. Honestly, the water wasn’t that cold because my adrenaline was pumping. It was fun for all of us.” – Heston Kjerstad on his game-winning hit and what the celebration was like

“It felt good to finally get back into the swing of things and get to being who I was last year and who everyone expected me to be. It was a culmination of getting more confidence in my pitches and using that to have more confidence in myself and executing. My breaking ball has been pretty bad all year. To get that back was big. Coach (Wes) Johnson and I made a little mechanical tweak during the week and it helped. It’s a weapon I can use.” – Jake Reindl on how he pitched effectively for seven innings

Up Next
Arkansas heads just a couple hours south to North Little Rock, Arkansas for its annual game at Dickey-Stephens Park, home of the Double-A affiliate Arkansas Travelers on Tuesday. The Hogs will face Grambling State for its only midweek game next week. First pitch is set for 6:30 p.m.