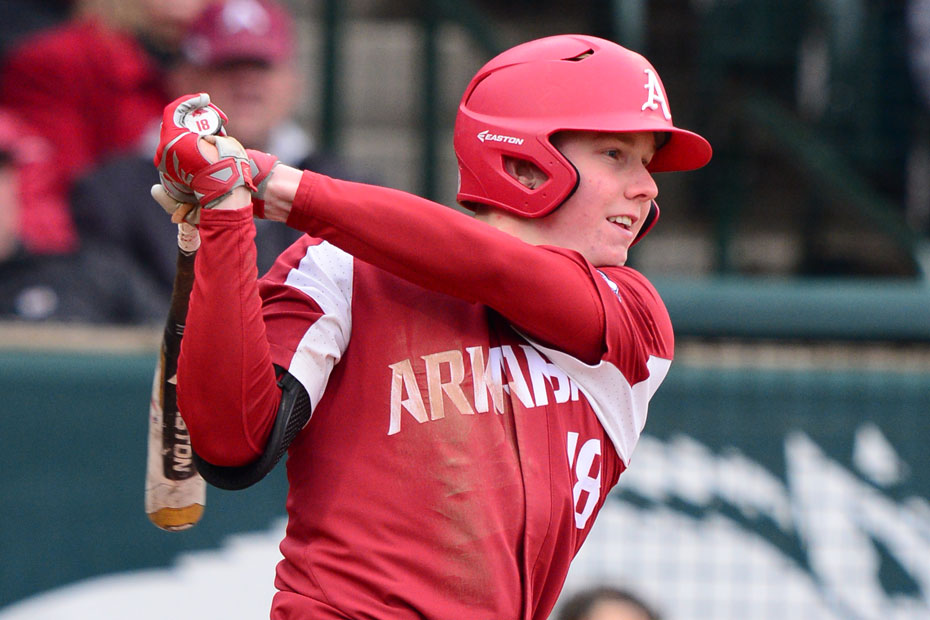 Murphy, making his first appearance of the 2018 season, faced down a tough Arizona lineup to throw six scoreless innings with just one hit allowed, one walk, and six strikeouts on 73 pitches. It continues a string of strong outings by the junior dating back to last season where he started on two consecutive days in the NCAA Fayetteville Regional, as well as throwing a complete seven innings in the SEC Tournament semifinals.

As for Kjerstad, the freshman carried over his success from opening weekend, hitting the solo home run on a night when offenses were stymied by both pitching staffs. Kjerstad finished the game 1-for-3 as his hit was one of just six combined on the night between both teams.

Kjerstad’s homer continued his hitting streak to open the year, making it four-straight games with at least one base hit. He also continues to lead the team with a .583 average and only has one strikeout in 12 at-bats.

The 1-0 win for the Hogs was a rare feat as it was the first of its kind since April 22, 2016 in a 10-inning win over Kentucky. It was also the 599th win for Dave Van Horn as Arkansas’ head coach. With one more victory, he will join an exclusive club as one of just three current head coaches in the SEC with 600 or more wins at their current school (Tim Corbin – Vanderbilt; Mike Bianco – Ole Miss).

Moments That Mattered
Murphy and Arizona starter Randy Labaut matched each other pitch for pitch in the early goings as both hurlers had three or more strikeouts after the first three innings. Combined, both teams only managed one base runner over the first three frames, which came from Arizona in the second on a one out walk.

Arkansas used clean defense throughout the game, including using a double play in the second inning to quell the first baserunner, followed by a heads up play by Carson Shaddy in the fourth after an Arizona baserunning error.

On that play, Arizona centerfielder Cal Stevenson took a wide turn at third base after an Alfonso Rivas single and was caught off the bag by Shaddy, who then flipped the ball to Hunter Wilson covering to help the Razorbacks escape the fourth unscathed.

That play was followed by the Kjerstad homer in the next inning to break the scoreless draw. Kjerstad sent the first pitch he saw in the fifth over the left-centerfield wall, one of just three hits allowed over seven innings by Labaut. Kjerstad is the eighth different Razorback to hit a home run this season.

Arkansas almost put a heavy pad on its lead in the ninth as Jared Gates nearly hit a two-out grand slam, but like many of the hard hit balls on Wednesday night, it died just feet from the outfield wall.

Murphy pitched through the sixth inning before giving way to the Arkansas bullpen. Redshirt sophomore Cody Scroggins started the seventh inning and struck out the first two batters he faced before loading the bases on a single and two-straight walks.

Sophomore Matt Cronin was called after Scroggins to try and get the final out and hold Arkansas’ one-run lead. He was able to do that after getting pinch hitter Seve Romo to ground back to the mound, leaving the bases loaded full of Wildcats. Cronin went on to finish the game and earn his first save of the year as he retired eight of Arizona’s final nine batters.

Razorback Quotables
“I didn’t expect a 1-0 ballgame. I figured it would be well pitched. They’re (Arizona) such a fundamental team that if they don’t make mistakes, they’re going to be hard to beat. Lucky for us, we pitched extremely well and we made the plays we needed to make. Our pitching staff did a great job and got out of a couple jams. We got one big swing and scored a run early. We put together a few good innings, but couldn’t get the big hit. I thought we got one in the ninth on the swing from (Jared) Gates. It would have been four runs, but the ball just stopped. I guess they call that the ‘marine layer.’ It’s a good win for us and now we’ll get a good workout in tomorrow and get ready for this weekend.” – Head coach Dave Van Horn on the win over Arizona

“He’s got some pop, obviously, and he’s got opposite field power. That’s something that’s hard to teach. It’s a gift. He’s a special player and a special kid. He’s been good for us since the day he got to school, so I’m excited about him and his future.” – Head coach Dave Van Horn on Heston Kjerstad’s home run

“I knew that lefty (Labaut) had been pounding the zone the whole game, so I was just looking for something up I could drive. This is a good win for us and it shows our pitching staff did an outstanding job. To give up two hits to their whole lineup was impressive. They kept us in the game in the whole time.” – Heston Kjerstad on his fifth inning home run

Up Next
The Razorbacks will play its first game of the Tony Gwynn Legacy Tournament on Friday against Cal Poly with first pitch at 3 p.m. CT. It will be Arkansas’ second of three games this week at Tony Gwynn Stadium on the campus of San Diego State. Sunday’s game against San Diego will be the only game Arkansas will play at the University of San Diego.

All games this week will be televised regionally by Cox Sports and can be heard on the radio on the Razorback Sports Network from IMG.