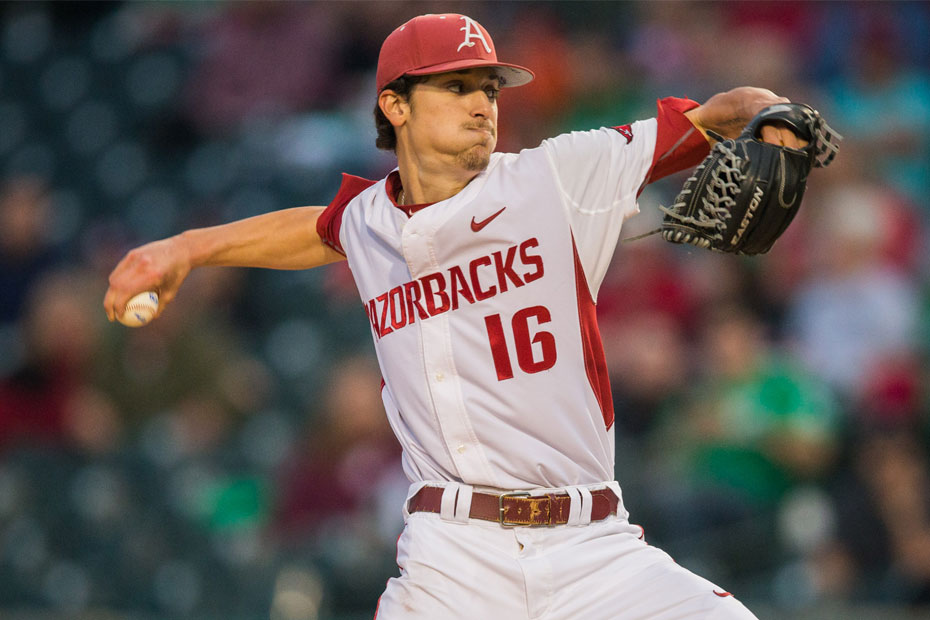 FAYETTEVILLE, Ark. – Sophomore Blaine Knight had a strong showing in his Friday night debut in Southeastern Conference play, going a career-long seven innings and striking out a career-high 11 batters to help the Razorbacks to a 3-1 win over Mississippi State at Baum Stadium.

Knight, who already had a 10 strikeout performance earlier this year against No. 5 Arizona in the Frisco College Classic, did just a little bit better on Friday. Matching Bulldog starter Konnor Pilkington pitch for pitch, Knight shook off an early first inning home run to pick up his second win of the year and allowed just four baserunners over his seven innings of work.

With his 11-strikeout performance, Knight is the first Razorback pitcher to have multiple 10+ strikeout games in the same season since Drew Smyly had 11 against Wisconsin-Milwaukee (March 13, 2010) and 10 against Florida (April 23, 2010) during the 2010 season.

Junior Luke Bonfield and sophomore Grant Koch provided all the run support Knight needed as both hit home runs that provided the three runs. Bonfield’s came in the bottom of the first inning as a response to Mississippi State’s solo home run in the first. His two-run shot was his fourth of the year as it was part of a 2-for-4 night.

Koch provided the insurance run with a solo home run of his own in the sixth inning, his team-leading sixth of the year and was his only hit of the game.

Moments That Mattered
It seemed like Friday night’s contest was going to be a slugfest after both teams hit home runs in the first inning. Mississippi State’s Ryan Gridley hit his fourth home run of the year with two outs in the first, but Knight settled down to retire 14 of the next 16 batters with only one reaching second base.

In his last three starts, Knight has struck out 25 batters in 17.1 innings and has still only walked one batter this season. Going back to last year, Knight has never walked more than two batters in a game and he has only done that twice in his career over 23 appearances.

Knight and Pilkington matched each other with scoreless frames in the second through fifth innings. Koch broke that scoreless streak with his solo shot into Hog Pen to give Arkansas a 3-1 advantage. Koch still remains near the top of the SEC in home runs. His six round-trippers is just one less than LSU’s Greg Deichmann, who led the league with seven home runs coming into Friday night.

Arkansas still leads the conference as a team in long balls with now 27 home runs. Mississippi State remains in second with 20 home runs of their own.

Arkansas’ bullpen continued what Knight had started when head coach Dave Van Horn decided to change up pitchers. Kevin Kopps and Evan Lee worked a scoreless eighth inning, giving up just one hit. Senior Cannon Chadwick worked a perfect ninth inning, striking out two and earning his first save of the year.

Razorback Quotables
“That was a really good Friday night ballgame. There were 24 or 25 strikeouts. We struck out a lot. He’s (Konnor Pilkington) a strikeout pitcher. He’s tough to see. The zone was fairly wide for both pitchers and they were hitting their spots. Both teams had to make that adjustment. I feel fortunate that we got a couple balls up in the air and we hit them out of the park. It was a tremendous job of Blaine Knight just shutting it down after the first inning. They’re a really good offensive team and Blaine just had one of his best nights as a Razorback.” – Head coach Dave Van Horn on the SEC opening victory

“The bullpen was outstanding. We told Kevin (Kopps) to come in and he had three right-handed hitters in a row in that 7-8-9 hole and you get those guys we’re going to go to (Evan) Lee for the switch hitter at the top and the two hole, left-hander if need be. Then we were going to go with (Cannon) Chadwick and that was our plan. We stuck to it and it ended up working.”.– Head coach Dave Van Horn on his bullpen’s performance

“He had all his stuff working tonight, sometimes one pitch is there, one is not. Tonight, he was commanding all of them, mostly his fastball. I think his fastball was the biggest part. He was really throwing hard and it lasted throughout the game, which is rare for a lot of guys. Just phenomenal.”.– Grant Koch on Blaine Knight’s career night

“It’s not good, it’s great. Now we got them on their heels a little bit, but it’s like we’ve been talking about. It’s like a boxing match. We got three rounds, we won the first one, we got to fight the second one tomorrow and the third one on Sunday.” – Blaine Knight on winning the SEC opener

Up Next
Arkansas and Mississippi State will continue its series on Saturday with the second game of the three-game series at Baum Stadium. First pitch is set for 7 p.m. and will be televised on the SEC Network. The game will also be broadcast on the radio on the Razorback Sports Network