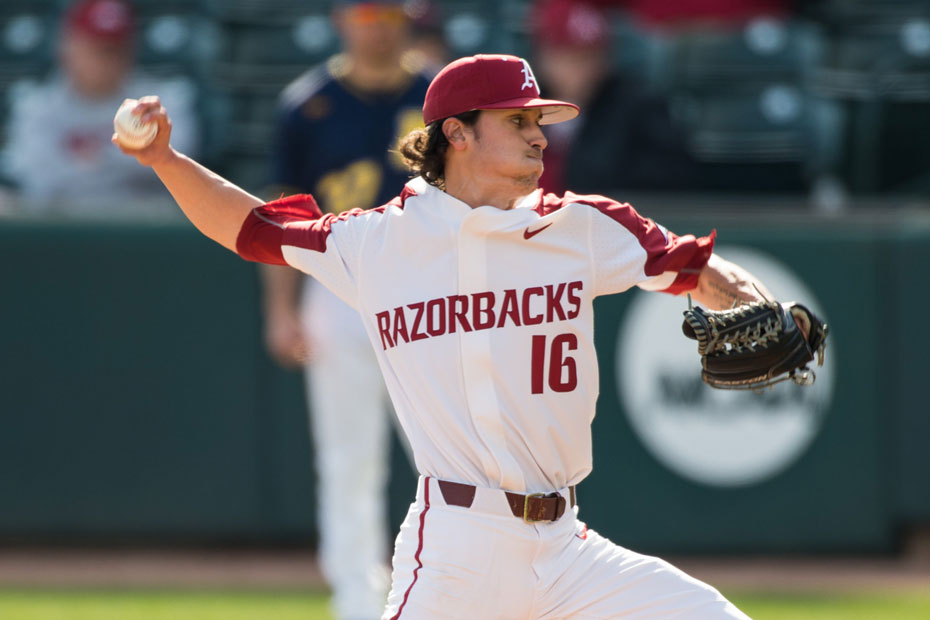 FAYETTEVILLE, Ark. – A fourth-straight strong start by junior pitcher Blaine Knight along with three home runs helped the fifth-ranked Razorback baseball team jump on top of Kent State in game one of a doubleheader Friday at Baum Stadium, winning 7-2 for its 10th victory of the year. The Golden Flashes come back in game two to defeat the Razorbacks, 10-4, forcing a rubber match on Sunday.

Game 1 | Arkansas 7, Kent State 2 (Box Score)
Knight has continued to show why he is Arkansas’ ace as he held Kent State down for six innings, scattering four hits, with just one run crossing the plate, a home run. He also struck out six batters, his second start with six or more strikeouts.

The Bryant, Arkansas native’s ERA is almost microscopic as he has generated a team-leading 0.78 ERA and has only walked four batters in 23 innings. Coming into this weekend’s slate of games, Knight was one of only five pitchers in the SEC with a sub-1.00 ERA.

At the plate, Arkansas played long ball as Eric Cole, Grant Koch, and Carson Shaddy all hit home runs. Shaddy finished game one as the Hogs’ top hitter, going 3-for-4 with two runs scored and two RBI. It’s his first three-hit game of the season and 44th multi-hit game of his career.

Cole’s home run, a three-run shot that was part of a four-run fourth inning to break the game open, give him four for the year, which leads the team and is a top-five total in the SEC. Cole got a hit in both games of Friday’s doubleheader, extending his hitting streak to six games. Over his last five games, he’s 8-for-18 (.444) with two home runs and six RBIs.

Seven different Razorbacks recorded a hit in game one, including six of their top seven hitters in the order. Freshman Casey Martin, who was batting in the three-hole for the first time this year, went 2-for-5 in the game. Catcher Grant Koch hit his second home run of the year in the second inning, getting the Hogs off and running after Kent State jumped out to a 1-0 lead.

Kent State scored their first three runs of the game in the first inning, but only one wound up being earned as it was a fielding error from the second batter of the game that helped extend the inning. After Campbell walked Nick Kanavas to put two on, Pavin Parks doubled to right-centerfield, giving the Golden Flashes their first two runs. Two batters later, a Brad Hamilton single brought in the third run of the inning.

Campbell labored into the fourth inning, but finished with 3.2 innings pitched, giving up five runs on five hits, with only one run being earned, as he was saddled with his second loss of the year.

Kent State led 5-1 going into the bottom of the fourth, but Arkansas was able to claw its way back with two runs of its own from an RBI single from Luke Bonfield and an RBI groundout from Heston Kjerstad, making it 5-3. Unfortunately, a lone run for Kent State in the seventh and then a four-run eighth extended the lead to its largest of the night at 10-3.

Arkansas’ hitters never seemed to get into any rhythm in game two as it pieced together seven hits, but struck out 11 times. Bonfield and sophomore Jordan McFarland both finished with two hits apiece. It’s Bonfield’s third multi-hit game of the year.

Up Next
Arkansas and Kent State will meet for the series finale on Sunday at Baum Stadium with first pitch at 1 p.m. Due to the forecasted rain and thunderstorms that are expected in the Northwest Arkansas area on Saturday, game two between the Hogs and Golden Flashes was moved to today and played as part of a doubleheader. Both teams will take Saturday off and play a final game on Sunday. The game will be broadcast on SEC Network+.