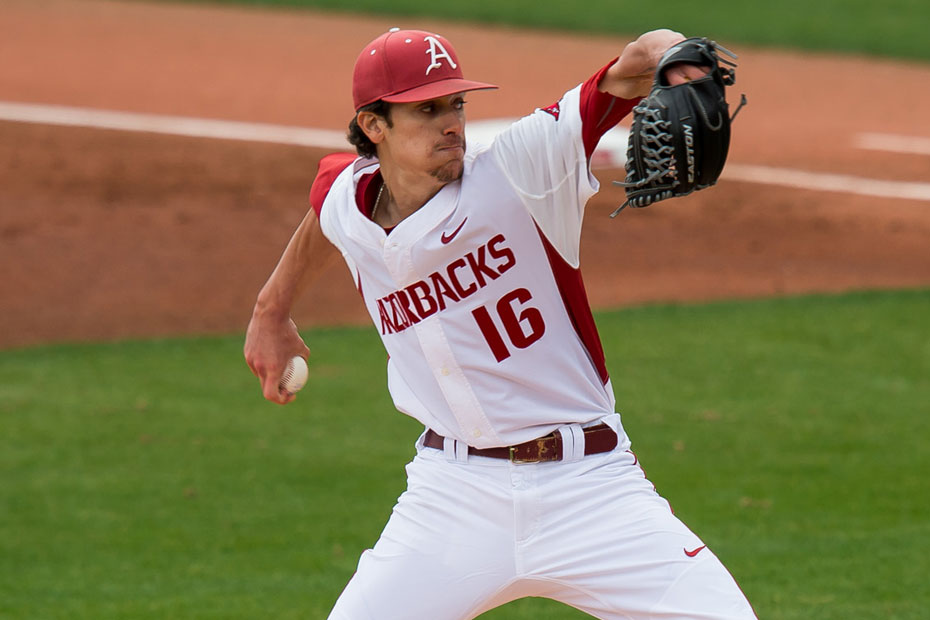 FRISCO, TEXAS – Even with a stellar pitching performance from Blaine Knight, the 20th-ranked Razorbacks couldn’t string enough hits together Friday afternoon, falling to No. 5 Arizona, 3-0, on the first day of the Frisco College Classic.

Knight was locked in through the first four innings against the Wildcats, setting down 11 of the first 12 batters he faced. By the fifth inning, he already had a new career-high of 10 strikeouts. Unfortunately, Arizona was pull together a few timely hits in the fifth and sixth innings, scoring a run in each, and the Hogs were not able to get on top of Wildcat starter J.C. Cloney.

The Razorbacks only managed three hits through 7.2 innings off Cloney, none for extra bases. Jake Arledge, Luke Bonfield and Jordan McFarland were the only Hogs with hits in the game. The hit for Arledge extends his hitting streak to five games

As for Knight, he finished the game with five hits and two runs given up through six innings. He didn’t walk a batter and struck out 10 on 83 pitches. He 10-strikeout performance is the most by a Razorback since his teammate Dominic Taccolini struck out 10 Kentucky batters on April 22 of last season.

Friday’s outing is the best start of Knight’s young career so far and easily the best of his three starts this year. The 6.0 innings thrown is a new career-long and the most strikeouts since he had eight against LSU on May 7 last year out of the bullpen.

Moments That Mattered
Arkansas had a chance to get on the board first in the first inning when Eric Cole reached on an error and Jake Arledge singled to kick off the game. But a fielder’s choice to move Cole to third was the closest Arkansas got as Cloney got a strike out and a foul out to end the threat.

The middle innings turned into a pitcher’s duel as Cloney and Knight matched each other pitch for pitch. Only two hitters reached base in the second through fourth innings between both teams Arizona finally broke through in the fifth on a double by Jared Oliva, but Knight kept the lead from expanding by totaling his ninth strikeout of the night to end the frame.

Arkansas’ best chance at runs in the late innings came in the eighth when Jordan McFarland singled to lead off and forced Arizona to go to the bullpen for the first time in the game. The Wildcats brought in Cameron Ming and promptly walked Jake Arledge to put two on with two outs. The next batter, Bonfield, hit a deep fly ball to centerfield, which would have been extra bases, but it was hauled in by the Arizona centerfielder to end the best threat the Hogs had all game.

Up Next
Arkansas will be back on the field at Dr. Pepper Ballpark on Saturday when it faces Nebraska at 7:30 p.m. The game will be televised on CST and on the radio on the Razorback Sports Network.