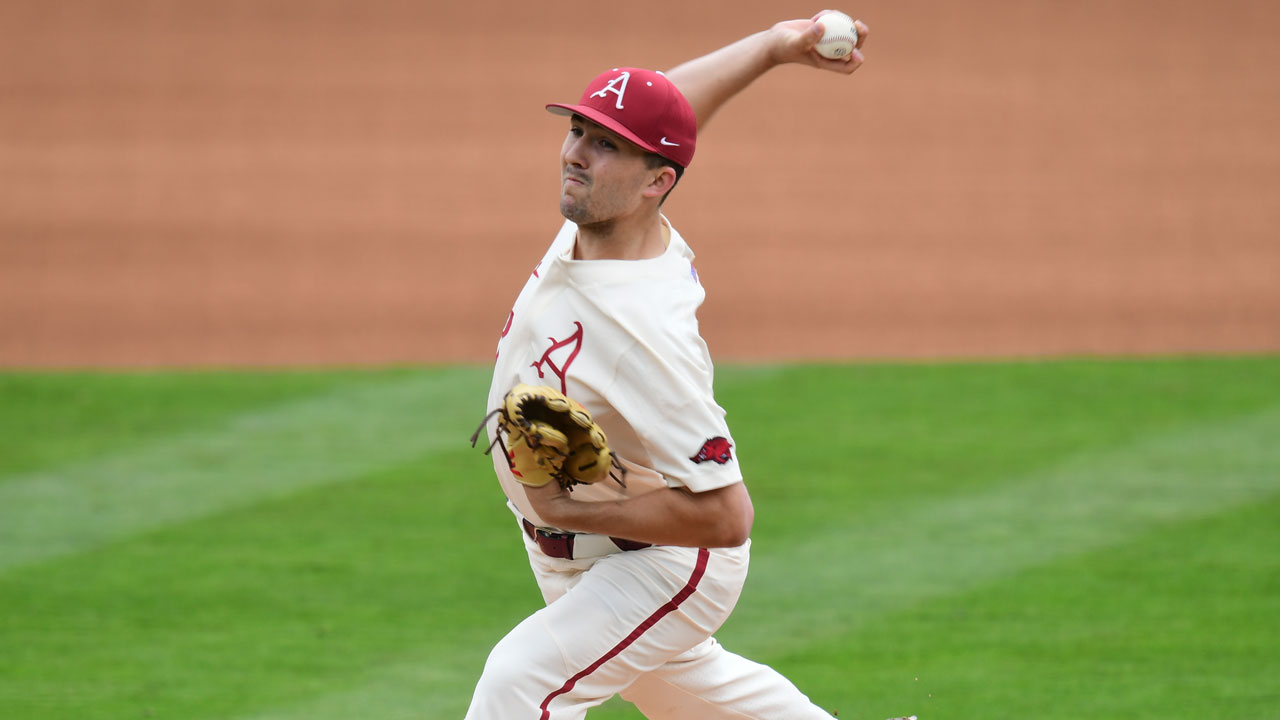 FAYETTEVILLE, Ark. – After holding 15th-ranked LSU scoreless through seven innings and with a 2-0 lead, fourth-ranked Arkansas looked primed for its fourth conference series sweep Saturday afternoon. However, a three-run home run in the eighth inning by Antoine Duplantis turned the tides and helped LSU defeat Arkansas, 3-2, at Baum-Walker Stadium, allowing the Tigers to salvage what was already a series loss.

Arkansas (39-13, 19-8 SEC) scratched across a run in the first and sixth innings against LSU (31-21, 15-12 SEC) starter Landon Marceaux and held that 2-0 lead all the way until the eighth inning. Unfortunately, in the fourth and sixth innings, Arkansas had runners in scoring position with nobody out and were unable to bring any extra runs across to pad its lead.

In the fourth, Dominic Fletcher and Heston Kjerstad both led off the frame with singles, but a double play in the next at-bat erased the big inning chance. Then, in the sixth, Matt Goodheart led off with a double and scored in the next at-bat on a Dominic Fletcher double. After the run, Marceaux walked Kjerstad and gave way to the bullpen, allowing Todd Peterson to come in and face Jack Kenley with two on and no outs.

Kenley singled to load the bases, but Jacob Nesbit grounded out in the next at-bat as LSU got the force out at home. That was followed by Casey Opitz grounded into the inning-ending double play, leaving a zero on the scoreboard after starting with three men on and nobody out.

Arkansas will remain at the top of the SEC Western Division standings after Saturday’s loss. With a two-game lead over Mississippi State heading into Saturday night’s slate of games, Arkansas will have no worse than a one-game lead going into next week’s season finale at No. 18 Texas A&M.

The Razorback pitching staff was a bright spot in Saturday’s game as starter Connor Noland threw 5.1 scoreless innings with four hits scattered and no walks with three strikeouts. Cody Scroggins followed in the middle of the sixth, giving up just one hit over two innings, but he walked three and, eventually, game-tying baserunner before Duplantis’s homer in the eighth.

For Noland, he’s thrown five or more innings in three of his last four starts and still hasn’t walked more than one batter in his last nine outings. Combined in his last five starts, Noland has struck out 24 batters and given up only four earned runs, which all came in last week’s start at Kentucky.

Offensively, the Hogs scattered eight hits in the game, two each off the bats of Dominic Fletcher and Heston Kjerstad. Fletcher finished the game 2-for-4 with a double, while Kjerstad was 2-for-3 with a walk as both of his hits were singles. Fletcher now has 21 doubles for the year, which continues to lead the SEC. The Arkansas school record for doubles in a season is 28 set by Jim Kremers in 1987.

Up Next
Arkansas hits the road for its final regular-season series next week as it travels to College Station, Texas to face the Texas A&M Aggies in a three-game series starting on Thursday at Blue Bell Park. First pitch for game one is slated for 6 p.m. and will be televised on ESPNU.