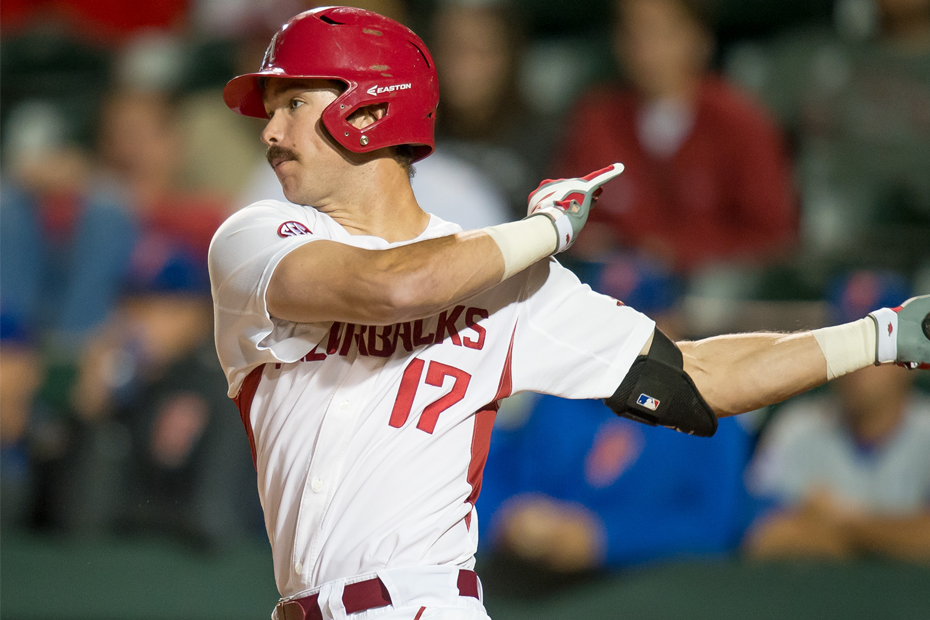 Late Rally Not Enough For Hogs Against Gators

FAYETTEVILLE, Ark. – The Razorbacks scored five runs in the eighth inning Thursday night, but it was after the 2nd-ranked Florida Gators had already scored 11 runs and added one more in the ninth to defeat Arkansas 12-8 in game one of the three-game Southeastern Conference series at Baum Stadium.

However, the Gators plated six runs in the fourth inning off five hits, three being doubles to break the game open and force Taccolini to come out of the game after just three innings.

Arkansas scored twice in the fifth inning to cut the deficit to 7-2 in favor of Florida. Clark Eagan and Luke Bonfield each singled home a run, but Puk was able to finish the inning with only the two runs allowed, securing his second win of the year. Puk finished the game with 9 strikeouts and only 5 hits given up.

Eagan, Chad Spanberger and Rick Nomura finished with two hits each in the game. For Spanberger, it was his fourth multi-hit game of the year and he blasted his third home run of the season during the bottom of the ninth into the Florida bullpen to give Arkansas its eighth run of the night.

The Razorbacks scored five runs in the eighth inning, sparked by Grant Koch’s second home run of the year. Koch hit the three-run homer down the left field line and snuck it around the foul pole and into the Hogs’ bullpen. With Spanberger and Koch’s home runs, it marked the 10th multi-home run game of the year for the Razorbacks. Arkansas continues to lead the SEC in home runs with 35 on the season.

Freshman pitcher Isaiah Campbell pitched 2 2/3 innings of relief Friday night, allowing just 3 hits, while striking out 3 batters. Three runs did cross, but they were not charged to Campbell as they were the result of an error and a pass ball.

“We wish we hadn’t given up those unearned runs. The problem is the amount of walks we allow and the pitches that weren’t located appropriately. Josh Alberius has been incredible for us all spring, but he was unable to locate his pitches tonight.”– Head coach Dave Van Horn on game issues

“We did fairly well against A.J. Puk as far as getting his pitch count up and fouling off pitches. He was getting his strikeouts but we made him work for them. He had 75 pitches after something like four innings. We put up a fight in the fifth inning and got Puk out of the game. We chipped away at the lead and finally got to one of their main pitchers, Shaun Anderson, who had to come in with two outs in the eighth inning and he had to pitch the ninth.” – Dave Van Horn on the offense fighting until the end

The Razorbacks and Gators return to the field Friday for game two of the series. First pitch is set for 6:30 p.m. CDT The game will be broadcast on SEC Network+.