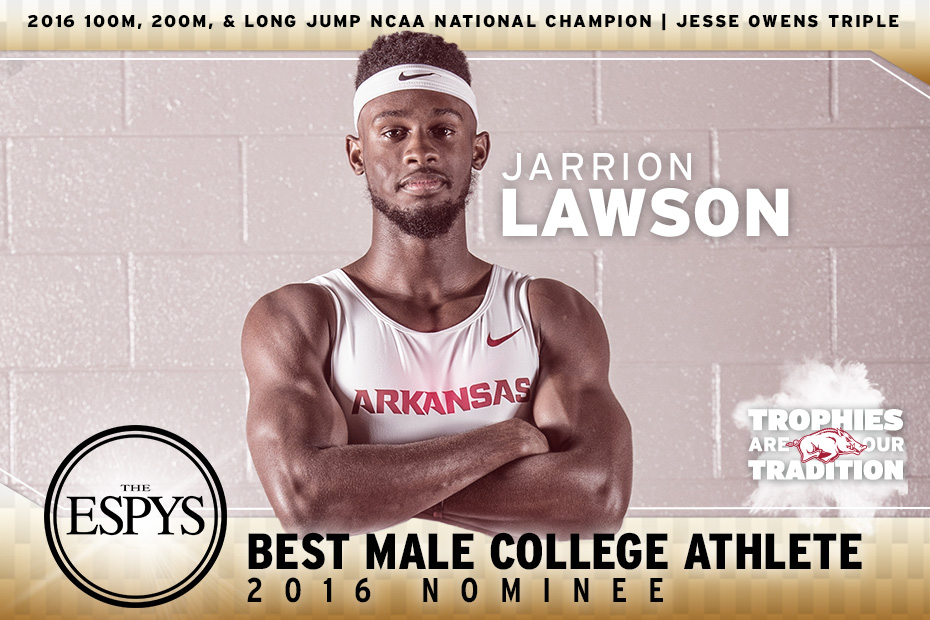 BRISTOL – Fresh off his national triple crown performance, Arkansas senior Jarrion Lawson has been selected as a nominee for the Best Male College Athlete category at the 2016 ESPY awards on July 13 in Los Angeles.

He is the first collegiate track and field athlete ever to be nominated in that category since the award show’s inception.

Fans can cast their vote for Lawson on the ESPYs home page.

A five-time NCAA national champion, Lawson followed in the footsteps of American sports legend Jesse Owens becoming the second man in history to capture gold medals in the 100-meter dash, the 200 and long jump at the NCAA Outdoor Track and Field Championship.

His awe-inspiring performance, which included a bronze medal finish at the second leg of the 400 relay, allowed him to contribute an incredible amount of points to the Razorback men’s overall team total. Lawson individually accounted for 31.5 of the final tally of 56.

One of the most decorated athletes to ever don an Arkansas uniform, Lawson has reached the podium at eight NCAA championships on 17 different occasions – four times apiece during the past two outdoor seasons.

Lawson now pursues success on the international stage as the Texarkana, Texas, native will look to earn a spot on Team USA at the 2016 U.S. Olympic Team Trials on July 1-10 in Eugene, Oregon. He is entered to compete in the 100, 200 and the long jump.

The complete schedule of events and spectator information for the Olympic Trials is available through USATF.