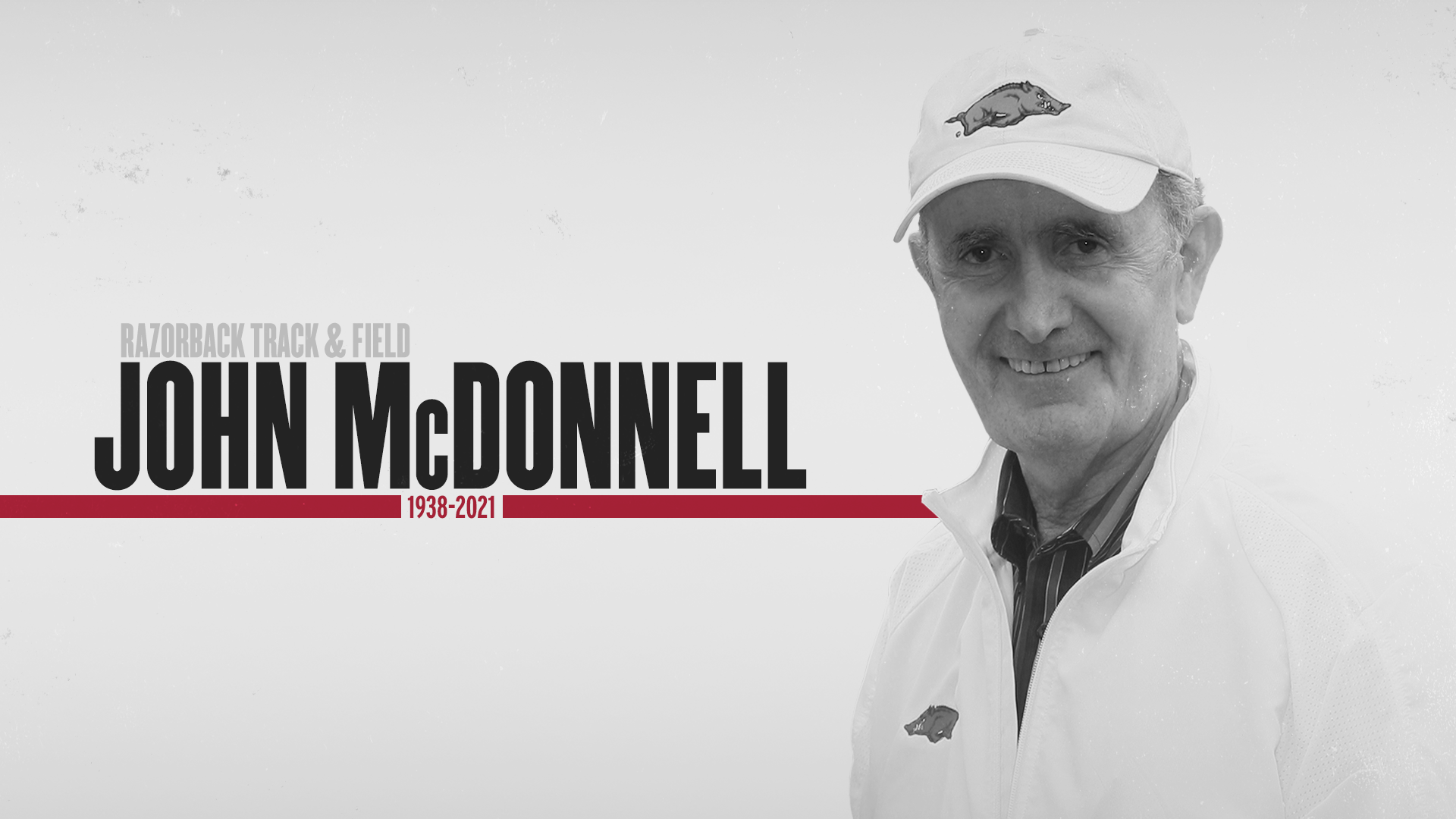 FAYETTEVILLE – Legendary University of Arkansas men’s track and field coach John McDonnell passed away on Monday evening in Fayetteville, Arkansas at the age of 82.

The following is a statement from the McDonnell family regarding the death of former University of Arkansas men’s track and field coach John McDonnell. Coach McDonnell, 82, died on June 7, 2021 in Fayetteville, Arkansas.

“It is with profound sadness that the McDonnell family announces our beloved husband, father, and brother, John McDonnell, transitioned to Heaven with our Lord and Savior at 10:54 pm on Monday, June 7, 2021. He passed away so peacefully, enveloped in the love of his family and friends. He could have settled anywhere in America after emigrating from Ireland, but chose to call Northwest Arkansas home because as he often stated, this was ‘God’s Country’.

“His career speaks for itself, but what truly spoke was his love for God, serving others, and his limitless generosity. We want everyone to know how thankful he was for the support, love, friendship, and depth of opportunities he received throughout the years. While the world has lost an extraordinary man, we not only mourn his loss, but wholeheartedly celebrate that God allowed people around the world to be touched and impacted by his gifts of faith, love, and inspiration. His legacy and spirit will forever live on through his family, friends, colleagues, and athletes.”

Arrangements for Coach McDonnell will be announced when they are finalized.

In his 36-year hall of fame coaching career at the University of Arkansas, McDonnell established a legacy of success unrivaled in the history of NCAA athletics producing 40 NCAA championships, including six national triple crowns and 12 consecutive NCAA Indoor titles from 1984-95.

“We are deeply saddened by the loss of a true Razorback legend and quite simply the greatest collegiate coach in the history of intercollegiate athletics,” Vice Chancellor and Director of Athletics Hunter Yurachek said. “John McDonnell was the personification of success on and off the track, winning 40 NCAA Championships and 83 conference titles, while even more importantly making an indelible impact on the hundreds of young men who had the privilege to compete for him.

“Coach McDonnell believed in each of his student-athletes and they loved and trusted him. What resulted was a stretch of unprecedented championship success at the University of Arkansas and lifelong lessons that will carry his legacy forward. Our thoughts and prayers as well as those of the entire Razorback Nation are with his wife Ellen, their son Sean, daughter Heather, the entire McDonnell family and all of the student-athletes, coaches, staff members and fans who were a part of his remarkable story.”

McDonnell’s accomplishments with the Arkansas men’s track and field program shine as a beacon for the Razorbacks in an infinite legacy.

While the amazing numbers he achieved with Arkansas will always be there to serve as a reminder to the dominance of the Razorback men’s program over his span of 36 years with the program, the personal relationships he developed along the way will be cherished forever.

The opportunity for many student-athletes to join an elite program built by McDonnell allowed numerous Razorbacks to flourish as individuals while being part of a powerhouse team which displayed its prowess through each season of cross country, indoor and outdoor track and field.

Lessons learned from McDonnell, while first establishing and then elevating Arkansas to an elite track and field program, carried beyond the time spent on campus, serving as a roadmap to future endeavors, either within the sport or life in general.

There are few coaches in the history of sports who come close to what McDonnell achieved at the University of Arkansas. From 1984 to 2000, a span of 17 years, at least one of his three teams brought home a national championship.

In total, there were 40 NCAA Championships for the Razorbacks under McDonnell, with 19 won during the indoor season, 11 in cross country and 10 during the outdoor season. McDonnell received National Coach of the Year honors 30 times in his career as well as 49 conference coaching honors.

Among those national championships with McDonnell at the helm, the Razorbacks joined the UTEP men’s team as the only program to claim a triple crown of titles, and then surpassed the Miners with a total of six, which includes five academic year and a calendar year variation of the triple crown.

On the conference level, McDonnell’s team flourished with 83 titles (37 SWC, 46 SEC), which included 34 consecutive championships in cross country, 27 from indoor and 22 outdoor. Even with the move to the SEC in 1991, the Razorbacks won 13 consecutive titles which then turned into 28 titles out of 29 contested from 1991 to 2001.

In addition to the championships, his list of honors includes membership in the halls of fame for National Track and Field, United States Track and Field and Cross Country Coaches Association (USTFCCCA), USA Track and Field, Arkansas Sports and Louisiana-Lafayette as well as the University of Arkansas Hall of Honor. Arkansas’ 7,000-seat outdoor facility, John McDonnell Field, is also named in his honor.

He is survived by his wife of 54 years Ellen (Elias) McDonnell, one son Sean McDonnell of Fayetteville, Arkansas, one daughter, Heather Hastings and husband Jeffery of Fayetteville, Arkansas, three sisters, Philomena Pena of Barcelona, Spain, Mary McDonnell and Margaret Carr both of Ballina, Ireland, one brother, Michael McDonnell and wife Jane of Edmond, Oklahoma, a sister in law, Una McDonnell of Crossmolina, Ireland and two grandchildren, Noah and Christopher Hastings.