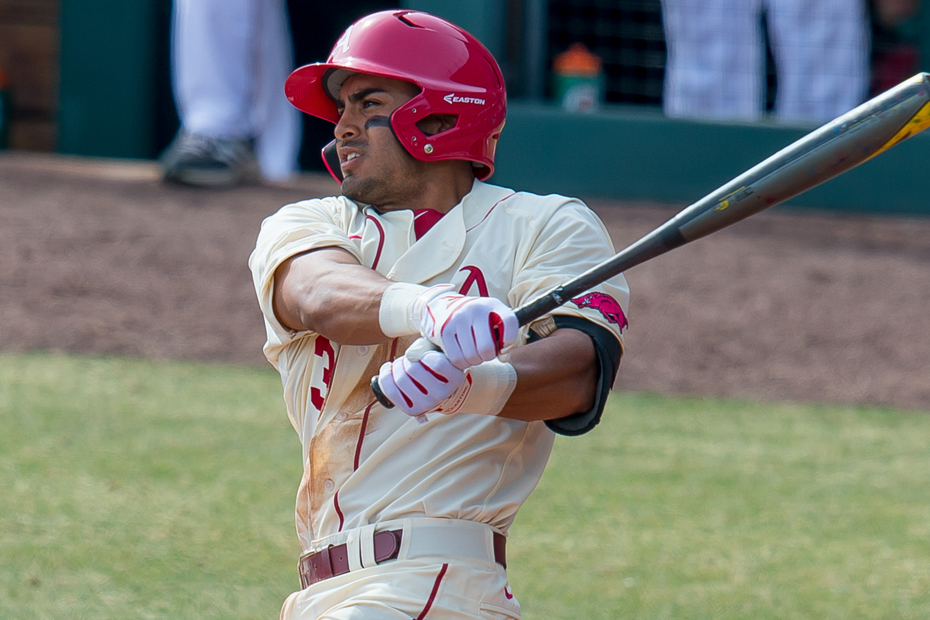 HOUSTON, Texas – No. 18 Arkansas hit three big home runs Saturday afternoon, scoring a huge victory over No. 9 Houston, 12-3, at Minute Maid Park in Houston, Texas, to stay undefeated at 7-0 on the season. Senior Michael Bernal provided two of the home runs, while sophomore Carson Shaddy hit a late bomb for his third home run of the year.

Bernal finished the game 2-for-4 with five RBI and two runs scored, easily having his best game of the young season. The two home runs is a new single-game high. Both of his homers flew well into the seats in left field, the second high off the foul pole. The left field seats, normally a short porch for the major leaguers at 315 feet, was no problem for Bernal.

Bernal’s second home run was part of a big five-run third inning for the Razorbacks that broke the game wide open. The Hogs scored one run in the first, two in the second and five in the third to take a big 8-1 lead. The Cougars scored a couple of runs in the sixth and seventh inning and had the bases loaded multiple times, but couldn’t bring them home to break into Arkansas’ big lead.

Shaddy’s two-run blast in the eighth was the icing on the cake for the Hogs as he is now tied for the team lead in the home run category with Bernal. Shaddy finished the game 3-for-5 with two runs scored and two RBI. Over the two games of the Houston College Classic, Shaddy has been a tough out, going 5-for-9 with four RBI and no strikeouts.

James Teague picked up the victory on the mound after coming in to pitch in the third inning relieving starter Blaine Knight. Teague entered the game after Knight allowed a lead-off single in the third, then proceeded to strike out two batters to leave a runner stranded at second. For Teague, it’s his first win of the year, as he only allowed one hit over the two innings, giving up no runs and striking out four.

Once getting a large lead by the fourth inning, head coach Dave Van Horn started utilizing his bullpen heavily, never letting pitchers throw more than 2.2 innings the rest of the way. Seven pitchers, in total, were used Saturday night, the most so far this season.

Houston struck first in the game, getting a lone run on Knight in the top of the first on a Justin Montemayor double, but the Razorbacks responded in the bottom half with a run of their own.

The Hogs led off their half of the inning with singles by Eric Cole and Carson Shaddy. Cole was brough home two batters later on a Cullen Gassaway ground ball to third base, deep enough in the hole to score the run.

The Razorbacks added to their lead in the second with the first of Bernal’s homers. The table was set well as Luke Bonfield reached with a lead-off single two batters earlier.

In five of its eight innings on offense, Arkansas’ lead-off batters reached base, giving multiple RBI opportunities for the Hogs’ heavy hitters throughout the game.

The game was broken wide open in the third for Arkansas. Shaddy, Clark Eagan and Rick Nomura all singled to load the bases and bring up Bonfield. Houston decided to make a change on the mound as starting pitcher John King was pulled after just 2.1 innings.

Nick Hernandez came on and struck out Bonfield, but couldn’t sneak one past Austin Catron as he singled to centerfield, deep enough to score Shaddy and Eagan, making it 5-1. Catron, who did not start at the designated hitter spot, pinch hit for Jack Benninghoff in the second and went on to go 3-for-3 with three RBI and a run scored.

Bernal brought everyone home in the next at-bat with another big fly, this one nearly going foul before it bounced halfway up the foul pole. It’s Bernal’s first two home run game of his career and second in as many at-bats in the game. The long ball scored three more for Arkansas for the 8-1 lead.

Houston never had a response to the Razorbacks’ offensive surge scoring once in the sixth and seventh innings and the pitching staff never seemed to get ahead of the Arkansas hitters. Overall, Arkansas had 13 hits in the game, six with runners in scoring position.

Arkansas closes out its Houston College Classic schedule with No. 23 Texas Tech on Sunday at 11 a.m. Both the Red Raiders and Razorbacks are 2-0 in the classic as Texas Tech defeated UL-Lafayette, 5-3 in 10 innings on Saturday.

The game can be seen on Cox Sports or ROOT Sports Southwest for viewers in Arkansas, Texas, Oklahoma and Louisiana. Across the rest of the country, the game can be viewed on MLB Network.