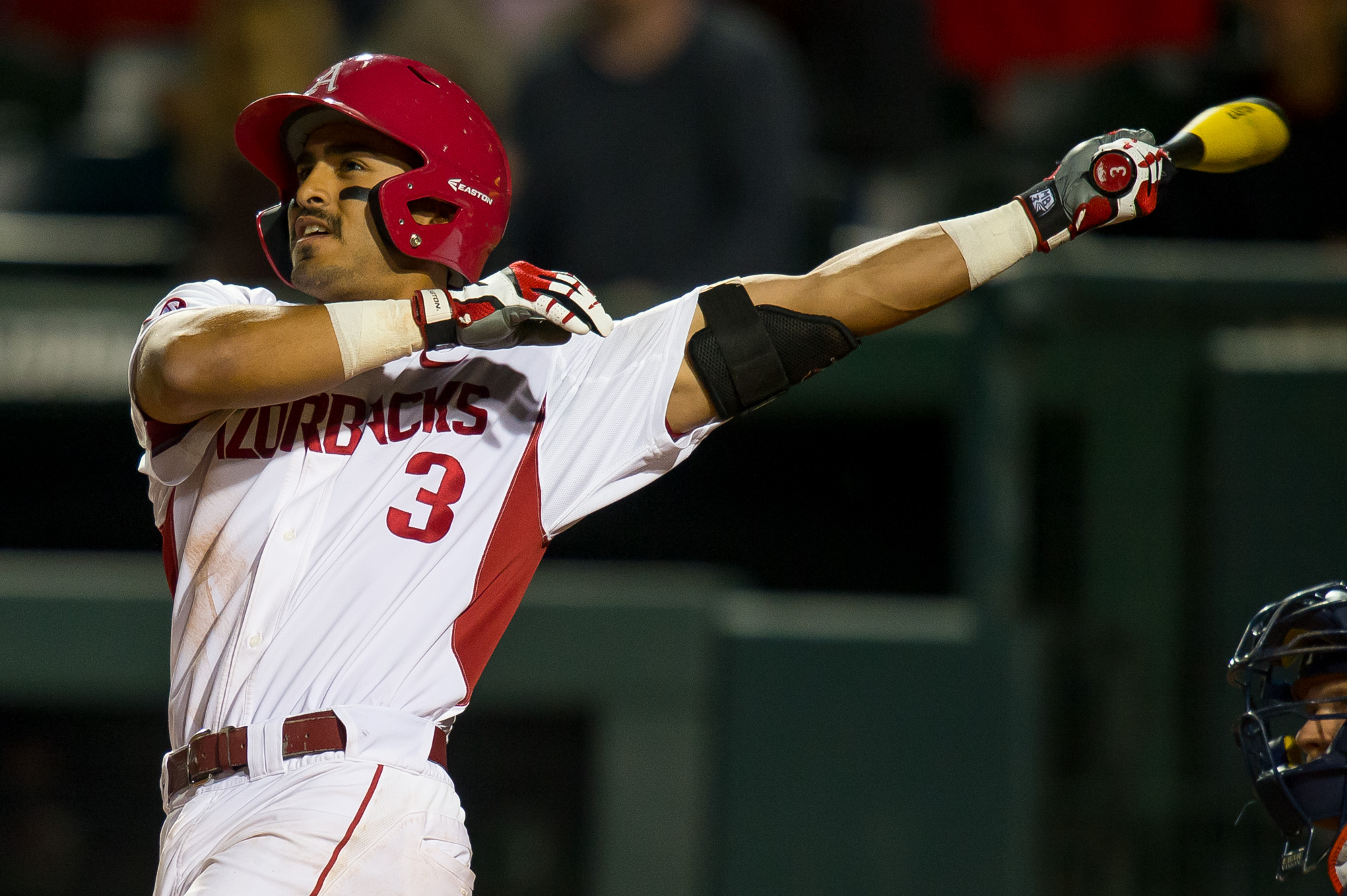 Bernal, for the second time this season, slugged two homers in the game, both coming in back-to-back at-bats in the fourth and fifth innings to help the Hogs break the game wide open. The El Paso, Texas-native finished the game 2-for-4 with four RBI, breaking a 13-game homerless streak he had coming in to Saturday’s game.

After Bernal’s big flies, Arkansas (17-6, 2-3 SEC) already had a commanding 8-0 lead over the Tigers (11-12, 1-4 SEC), but he wasn’t the only one to get in on the home run action. Sophomore Luke Bonfield slugged his fourth home run of the year, capping the five-run sixth inning, as part of a 1-for-3 night. He along with Chad Spanberger, who added his third home run of the year in the eighth inning made it a four home run night for the Hogs.

Saturday marked the fifth game that Arkansas has hit three or more home runs this year and the four long balls was the most in a game by an Arkansas team since clubbing four against Tennessee back in 2012. As a team, the Hogs now have 29 home runs this season, which remains as the overall conference lead.

Along with Bernal and Spanberger, Carson Shaddy was the third Razorback with a two-hit night, going 2-for-3 with two runs scored and a walk. It was Shaddy’s 11th multi-hit game of the year, which leads all Hog players and was his fourth multi-hit game in his last seven starts.

Arkansas gave McKinney an early but slim lead in the first inning by jumping on Auburn starting pitcher Casey Mize with a lead-off single by Clark Eagan. Eagan was able to make his way around the bases after a pass ball and a ground out before scoring on a Cullen Gassaway groundout.

The Razorbacks opened the flood gates for their offense in the middle innings, getting the next two runs off the opposite field home run from Bernal in the fourth inning to make it 3-0. Then, the big five-run fifth and sixth innings broke the game wide open as the second home run by Bernal and the big fly from Bonfield had Arkansas to a 13-0 lead.

Before his homer in the fourth, Bernal had not had a home run in 13-straight games dating back to the final game of the Houston College Classic, going deep against No. 23 Texas Tech back on Feb. 28. With now six home runs on the season, Bernal not only re-takes the team lead, but is now tied for the SEC lead in the category.

Mize did not last long on the hill for Auburn, going 3.2 innings, allowing four hits, two earned runs and three walks, picking up the loss to move his record to 1-2 on the year.

Auburn did try to make things interesting in the final three innings, outscoring Arkansas 7-1 to pull within seven, but the Spanberger homer in the eighth was the nail in the coffin as what was once a 13-run lead was too big to overcome for Auburn, giving the Hogs their 17th victory of the year.

The Razorbacks and Tigers will conclude the series Sunday as the Hogs will try to go for the sweep with first pitch slated for 1 p.m. at Baum Stadium.

“I still have a lot more but today, I made pitches when I needed to. I walked a lot of guys and I didn’t want to do that, but when I needed to bear down and make a pitch today, I seemed to get it inside on the guys and that helped a lot.” Keaton McKinney on his six-inning performance on the mound

“That was good for us. Anytime ending a game or just having that bit of spark in the offense, it carries over. I think the entire game yesterday, we were hitting the ball well, hitting it hard, but just a bunch of balls right at guys, so we didn’t catch any breaks yesterday. Today, we found the gaps and the holes. That was pretty good for us.” Michael Bernal on if Friday’s walk-off win carried over to Saturday’s game

“Good job by McKinney getting us off to a pretty good start. He got us out of a couple of jams early. Command was okay, but he made some big pitches. You can just tell he’s gaining more confidence with each outing; gave us a chance to give us a couple innings but his pitch count got to 100. After that, threw a couple of guys out there that struggled a little bit, but gave us an opportunity to save some pitchers for tomorrow. We walked too many, but we didn’t want to give in to a lot of hitters.” Dave Van Horn on the overall performance of the pitching staff

“He’s been working extremely hard on his hitting. He’s been struggling and really hasn’t swung the bat well since we left Houston and that’s been 2-3 weeks now. It’s about pulling off. If he did hit a ball well, it would be foul. Coach (Tony) Vitello and Mike (Strouhaul) have worked hard with him. He wasn’t out front of the ball and that was good to see. We need that bat down at the bottom of the order and it’s good to have him swinging it for us.” Dave Van Horn on Bernal’s two home runs