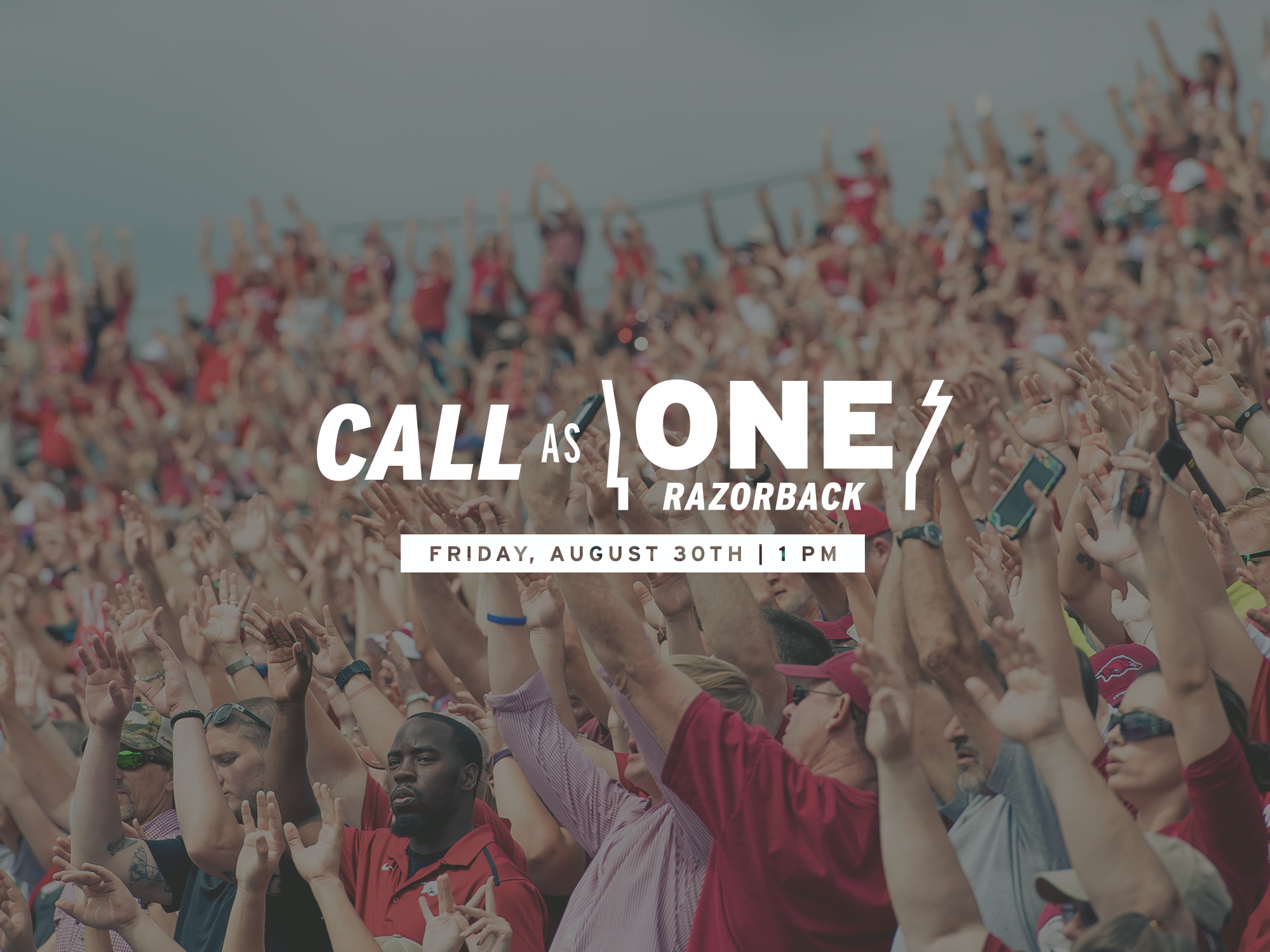 Make Your Plans Now for One Hog Call

FAYETTEVILLE, Ark. – On Friday, August 30 at 1 p.m. CST Arkansas Razorback fans are invited to stand up as ONE fan base and Call the Hogs in the second annual ONE Hog Call. Fans are also encouraged to organize group gatherings wherever they are in the world to participate in the coordinated Hog Call.

Free public events will be held in Fayetteville and Little Rock where fans across the state can rally and call the Hogs in unison as ONE Razorback.

Fans in Northwest Arkansas are invited to gather at the Pryor Center at 12:30 p.m. on Aug. 30 for pre-call activities including free food, prize pack drawings plus appearances by the Razorback Spirit Squads and the Best in Sight and Sound Band. At 1 p.m. Arkansas head women’s basketball coach Mike Neighbors will lead those in attendance in ONE Hog Call. Free parking will be available in the Town Center parking garage.

University of Arkansas students, faculty and staff are invited to gather at the Arkansas Union Ball Room, for an on-campus ONE Hog Call event. Festivities will begin at 12:30 p.m. with free food, music by DJ Derrick and appearances by the Razorback Spirit Squads and the Best in Sight and Sound Band. At 1 p.m., Chancellor Joseph Steinmetz and ASG President Jared Pinkerton will lead those in attendance in ONE Hog Call.

Little Rock activities will be held on the field at War Memorial Stadium beginning at 12:30 p.m. the same day. Attendees can enjoy free food, giveaways, Razorback trivia and appearances by former Razorback student-athletes. Tusk V will also make his official debut as the University of Arkansas’ live mascot at the One Hog Call event in Little Rock.

Former Razorback and local radio host David Bazzel will emcee the event. Arkansas Governor Asa Hutchinson, Arkansas Vice Chancellor and Director of Athletics Hunter Yurachek and Arkansas Head Baseball Coach Dave Van Horn are all scheduled to attend the event in Little Rock. Fans should park on the east side of War Memorial Stadium and enter the stadium through gate 1. Please note, due to the Salt Bowl being played at the venue later that evening, those attending the One Hog Call event at War Memorial Stadium will need to go through a security screening and a bag check before entering the stadium.

All fans are encouraged to post photos and videos of their Hog Call on social media using #ONEHogCall. Some of the best submissions will be featured on Razorback social channels and videoboards in Donald W. Reynolds Razorback Stadium during Arkansas’s 2019 football season opener against Portland State on Saturday, August 31.

Last year’s inaugural ONE Hog Call event generated support from around the world, including from 40 states, 16 countries, 62 schools and 65 Arkansas businesses.