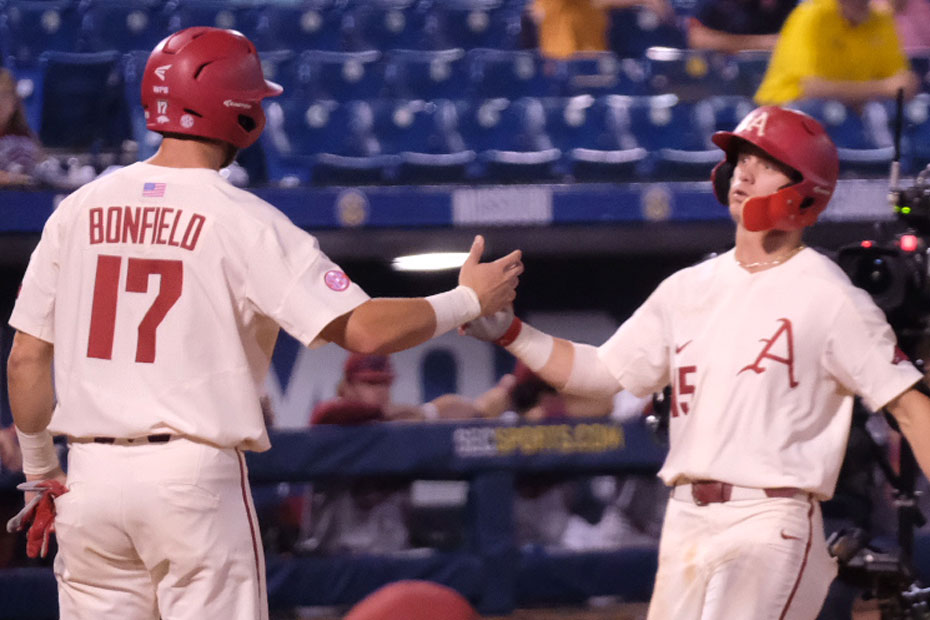 With the win, the Razorbacks (38-17) snap a two-game losing streak it had coming in and will face the top-seeded Florida Gators on Thursday at approximately 8 p.m. on the SEC Network.

Martin, who went 2-for-5 in the game, went deep in the fourth and sixth innings, marking his second multi-home run game of the year. The freshman is one of two players in this year’s tournament to have a multi-home run game joining Texas A&M’s Chris Andritsos, who homered twice earlier in the day against Georgia.

With his two home run game Wednesday, Martin is now tied with outfielder Eric Cole for the team lead with 12 home runs on the year and he is one home run away from tying Zack Cox for the most home runs by a Razorback freshman in a single season in school history.

Arkansas scored two or more runs in each of the first four innings Wednesday night to jump out to a 10-1 lead on South Carolina. Along with Martin’s long ball, sophomore Dominic Fletcher got it all started with a three-run shot in the bottom of the first inning, his eighth of the year. The Razorbacks were able to chase Gamecock starter Logan Chapman after just 1.1 innings and six runs allowed on three hits.

South Carolina did tighten it up in the middle innings, putting up a five spot in the sixth to cut the lead to 10-6, four coming off a grand slam from L.T. Tolbert. That slam did force Arkansas starter Kacey Murphy out of the game, but he was still able to corral the win, his seventh of the year.

The 13 runs scored by the Razorback offense is the most it has scored in a game since scoring 13 against Auburn on April 7, part of a three-game sweep of the Tigers. As a team, Arkansas has scored 10 or more runs in 13 games this year and is 12-1 in those contests.

The Hitting
The Hogs put up an offensive show in the opening innings, crossing the plate six times in the first two frames before the Gamecocks ever had a response. Five of Arkansas’ first 10 runs came with two outs, three off the big swing from Fletcher, who unloaded his eighth home run of the year over the left centerfield wall and into the trees lining the outfield wall.

Fletcher finished the game 2-for-5 at the plate, tying a career high with five RBIs. It was Fletcher’s best day, offensively, in a number of weeks, as he hadn’t recorded an RBI in five-straight games before Wednesday.

Arkansas’ 4-5-6 hitters all recorded multi-hit games with Fletcher and Martin leading all players by driving in eight of their team’s 13 runs. Luke Bonfield had a strong night, as well, going 2-for-3 with two runs scored and one RBI.

The Pitching
Junior lefty Kacey Murphy was mowing down Gamecock batters early on with just one hit allowed in the first two innings. South Carolina did take advantage of two Arkansas errors in the third to score its first run, but Murphy settled back in retire 10 of the next 11 batters. He struggled to get out of the sixth after the Tolbert grand slam, but left the game with a large enough lead that the decision was never in question.

Freshman Kole Ramage was the first man out of the bullpen and handcuffed hitters all the way to the ninth inning, but had his own issues closing out the game. South Carolina was able to score twice in the ninth before head coach Dave Van Horn decided to go to Barrett Loseke. Before the switch, Ramage had scattered five hits over 2.2 innings. It was his second outing in a row of two or more innings of work with two runs or less allowed.

Up Next
Arkansas moves on to the conference tournament’s third round on Thursday where it will face the top seed Florida for a spot in the semifinals. This will be the first time the Razorbacks and Gators have faced off since Arkansas dropped two of three in its series in Gainesville in late March.

First pitch is set for approximately 8 p.m. at Hoover Metropolitan Stadium. All games this week are televised on the SEC Network.