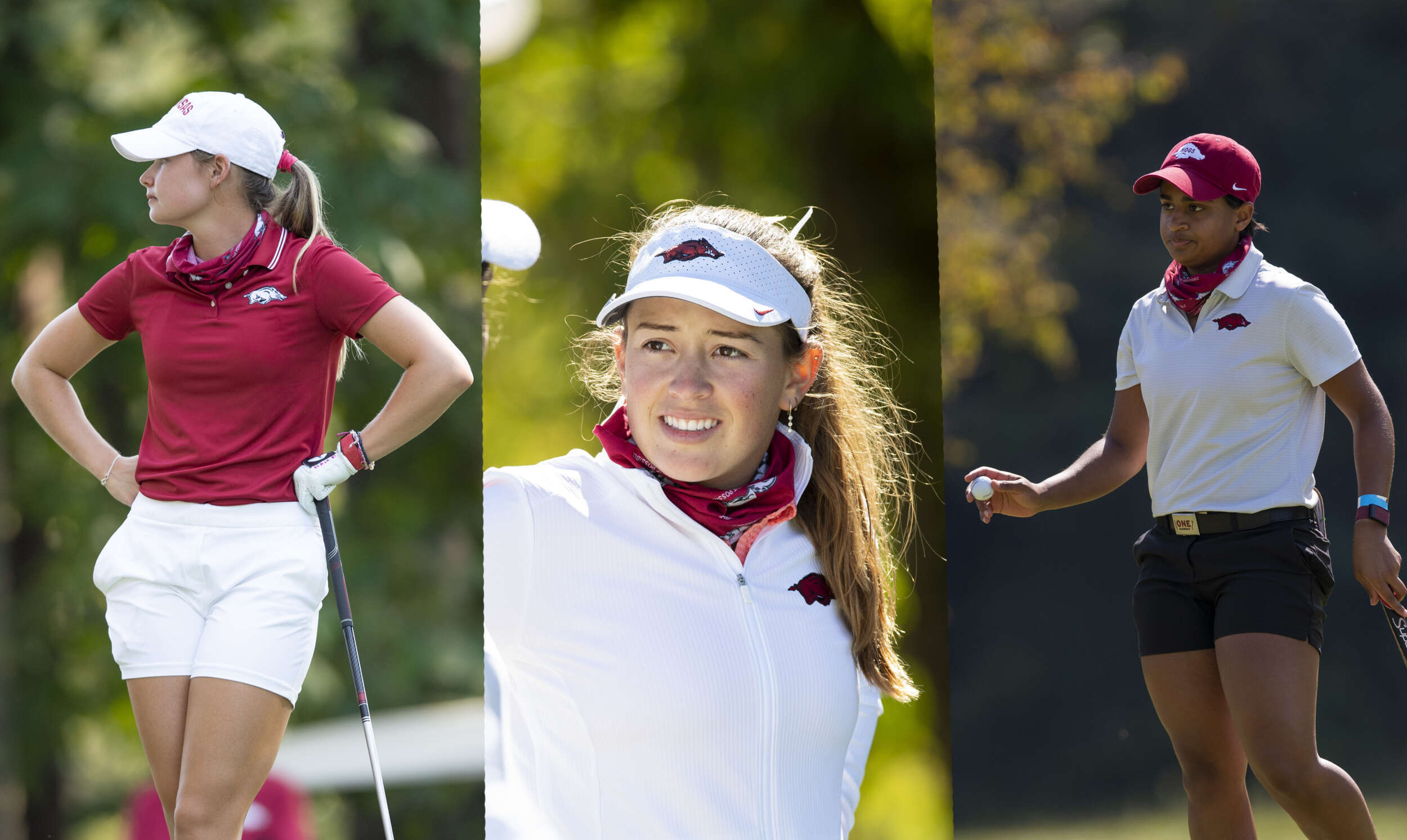 FAYETTEVILLE, Ark. – Three Hogs were Southeastern Conference postseason award honorees, announced today by the conference office, as Brooke Matthews, Cory Lopez and Kajal Mistry were all recognized by the league’s coaches. Matthews earned a spot on the SEC’s First Team; Lopez was named to the league’s All-Freshman Team; and Mistry was named to the conference’s Community Service Team.

Matthews’ recognition comes after a remarkable season for the redshirt junior, as she was one of just eight First Teamers named by the league’s coaches. The Rogers, Ark., product becomes the first First-Teamer for Head Coach Shauna Taylor since the trio of Maria Fassi, Dylan Kim and Kaylee Benton were named to the first team back in 2019. The honor was well deserved, as Matthews finished her redshirt junior season with four top-10 finishes, two runner-up finishes, and a historic win at the inaugural Blessings Collegiate Invitational. If the season were over today for the Hogs, Matthews’ 72.22 stroke average during the 2020-21 season would represent the ninth-best average in program history. She has had other accolades outside of collegiate golf this year as well, as she made waves at the LPGA’s Northwest Arkansas Championship, finishing in the top-50 amongst a field of professionals, tallied a top-30 finish at the Augusta National Women’s Amateur, while also receiving an invitation to represent Team USA in the Arnold Palmer Cup this summer. Her 15 par-or-better rounds and her four events under par also currently pace the Hogs.

Lopez, meanwhile, has been a steadying force for Coach Taylor during her first collegiate season, as she joins Matthews and sophomore Ela Anacona as the only two Hogs to play in all nine events so far this season. The Monterrey, Mexico, native joins Matthews (2019) and Anacona (2020) as the most recent Razorbacks to be named to the SEC’s All-Freshman Team. Lopez trails only Matthews in stroke average this season (73.70), and is third on the squad in par-or-better rounds (7). Despite playing in all nine events, Lopez only placed outside the top-35 one time. Her best tournament of the season came right out of the gate, as she finished 11th at the BCI.

Arkansas’ representative on the SEC Community Service team for the 2020-21 season was Mistry, who continued to give back to her community even during a global pandemic. Despite not being able to return home to South Africa this summer, Mistry made the best of it, as she and her host family, the Matthews, went and served at a soup kitchen at least once a month. Once the school year arrived, Mistry was an advocate for her fellow student athletes as a part of the Student Athlete Advisory Committee. On top of it all, Mistry also participated in a virtual National Girls & Women in Sports Day event, the Razorback Canned Food Drive, and the Salvation Army’s Drive-by Collection ahead of the Holiday season.