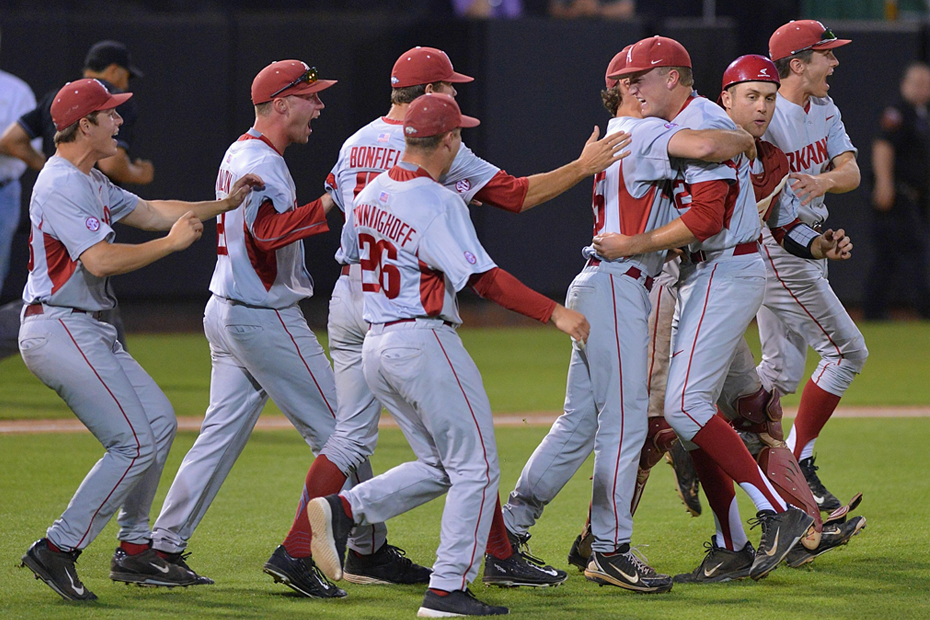 Midweek Tilt For Razorbacks at No. 16 Oklahoma State

STILLWATER, Okla. –No. 15 Arkansas baseball has a quick turnaround after its three-game sweep of Auburn when it travels to No. 16 Oklahoma State Tuesday for a single midweek game at 6 p.m. at Allie P. Reynolds Stadium in Stillwater, Okla. Tuesday’s game will be first time the Razorbacks and Cowboys have faced off since last year’s NCAA Stillwater Regional semifinal that Arkansas won, 7-5, to advance to regional final against St. John’s and eventually reaching the NCAA Super Regionals.

The Razorbacks are fresh off a three-game sweep of Auburn last weekend, which was their first sweep of an SEC opponent at home since 2012 and moved their conference record back even at 3-3.

Arkansas has come away winners in four of the last seven meetings with the Cowboys dating back to 2004. However, Oklahoma State leads the all-time series 23-17 and is 9-7 against the Hogs in Stillwater.

Senior shortstop Michael Bernal had one of his best weekends at the plate, hitting a team-best .455 in 11 at-bats, scoring two runs and hitting two home runs with seven RBI. Bernal only struck out once in the three games against Auburn as he came up with two big home runs to help clinch the series on Saturday and then accounted for all three of Arkansas’s runs on Sunday, knocking in the tying and winning runs in the seventh and eighth innings.

On Saturday, against Auburn, Bernal hit two home runs in back-to-back at-bats, his second multi-home run game this season and second instance where he hit two home runs in two straight at-bats. Both coming against then-No. 9 Houston in the Houston College Classic back in February.

Arkansas’s bullpen, which struggled against South Carolina, flipped the switch on Auburn combining for a 3.33 ERA, which is a near five-run improvement from the week before (8.62) as the hurlers struck out 25 batters and gave up just 10 earned runs over the course of three games.

Sophomore right-hander Keaton McKinney was the only Hog starting pitcher to come away with a quality start, going six innings strong on Saturday, earning his first win and first decision of the year. McKinney gave up no runs on three hits with three strikeouts. Even though he walked five batters, McKinney was able to get the big pitches and hold his opponent to a season-low three hits.

On Tuesday, freshman right-hander Blaine Knight will get the start, his fourth of the year and first since taking the mound against Eastern Illinois on March 5. Knight made three starts through the first three weekends of the season, but has come out of the bullpen in each of his last two appearances.

Knight carries a 2-0 record on the year with a 4.32 ERA through 16.2 innings pitched with just eight runs given up and 15 strikeouts. Against Western Illinois, Knight was called out the bullpen early in the game in relief of McKinney in the fourth inning. Knight carried the load for 4.1 innings, giving up no runs on just three hits, a season-low in four innings or more of work.

Tuesday’s game against Oklahoma State will be only its fourth true road game of the season. Arkansas was swept in Columbia, S.C. during opening SEC weekend, but took three-straight on neutral ground in the Houston Shriners College Classic, beating No. 23 Rice, No. 9 Houston and No. 24 Texas Tech, all at Minute Maid Park.

Oklahoma State will return the favor of the home and home series later this year with a single midweek game at Baum Stadium against the Razorbacks on April 26.

Follow Live
Fans can catch Tuesday’s game on Fox Sports-Plus with David Hunziker (PXP) and Tom Holliday (Analyst) on the call. Fox Sports-Plus is available through your local cable provider as an alternate channel to Fox Sports Southwest.

Phil Elson will be on the radio call via the Razorback Sports Network from IMG.