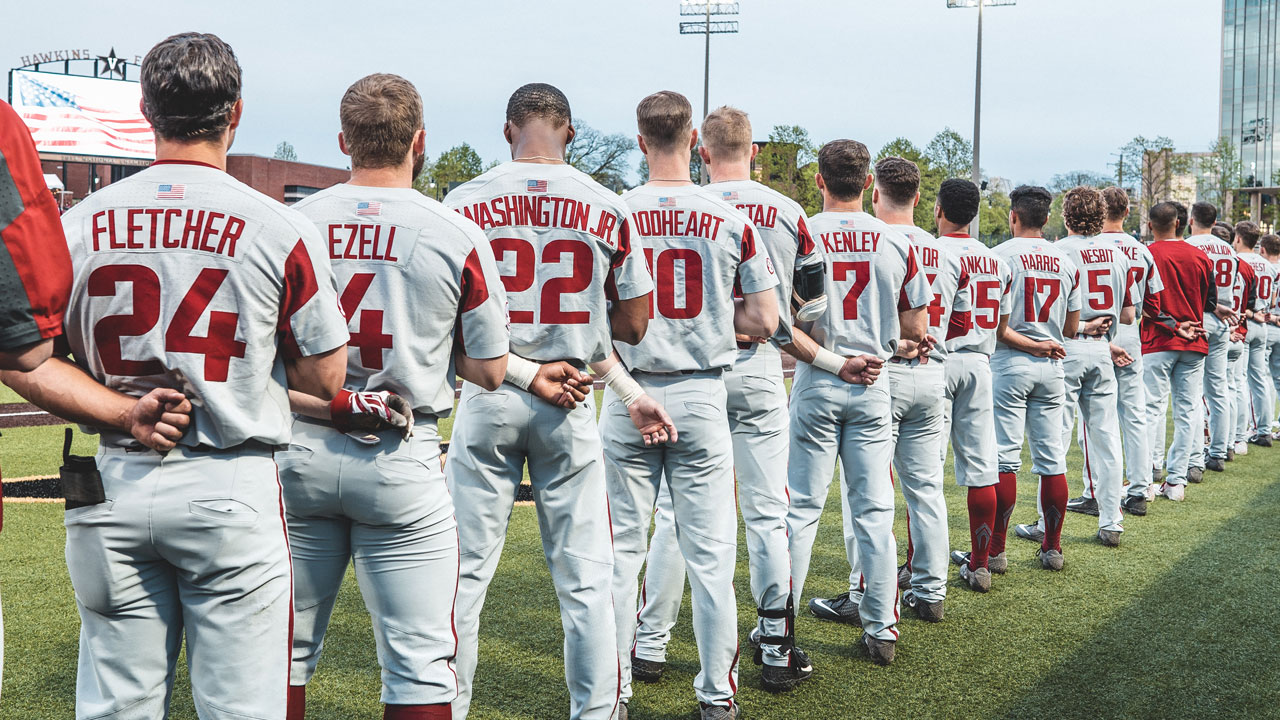 NASHVILLE, Tenn. – The eighth-ranked Arkansas baseball team had the tying run at third base and the go-ahead run at second in the eighth inning Friday night, but was unable to bring any of them home to score as sixth-ranked Vanderbilt escaped with a 3-2 series-opening win at Hawkins Field.

The Razorbacks (25-9, 8-5 SEC) left nine runners on base in the tight affair as runs were truly at a premium in what turned out to be quite the Friday night pitching matchup. Arkansas’ Isaiah Campbell and Vanderbilt’s Drake Fellows combined for 14.2 innings pitched and only two walks with each notching nine strikeouts.

Campbell was just an out short of recording the eight-inning complete game and a career-long innings pitched, but gave up three-consecutive hits in the fourth inning, two off doubles from Ethan Paul and Philip Clarke for two of Vandy’s three runs. Campbell still struck out nine in his outing, the most in his last four starts.

The redshirt junior finished with 7.2 innings pitched, his seventh-consecutive start of six or more innings, six hits scattered, three earned runs, nine strikeouts and no walks. It’s the third time this year he hasn’t walked a batter in an outing and all three were outings of five innings or more.

On the offensive side, Arkansas outhit Vanderbilt (26-8, 8-5 SEC) 7-6, but only managed a run in the second from a two-out RBI by Casey Opitz and a bases-loaded RBI groundout in the eighth by Jacob Nesbit.

Sophomore Casey Martin and junior Jack Kenley led all Arkansas hitters with two hits each and both have 11 multi-hit games this season. Heston Kjerstad, Matt Goodheart and Opitz each added a hit of their own as both Kjerstad and Goodheart extend their hitting streaks to seven games.

Opitz RBI single in the second inning gave Arkansas the early 1-0 lead, but was the only lead it was able to grab in the game. The Hogs crept back within a run after getting Dominic Fletcher on with a hit by pitch followed by two consecutive walks to load the bases with one out.

However, Vanderbilt brought in its closer in Tyler Brown and limited the damage with just the groundout RBI by Nesbit and then got Opitz to strike out with the tying run on third. Arkansas had at least one runner in scoring position in four of the final seven innings after scoring its first run, but came away empty handed three of those times.

Up Next
Arkansas and Vanderbilt will be back on the field for game two tomorrow at Hawkins Field and will have first pitch at Noon due to the predicted inclement weather later in the day. The game will be streamed online via SEC Network+.