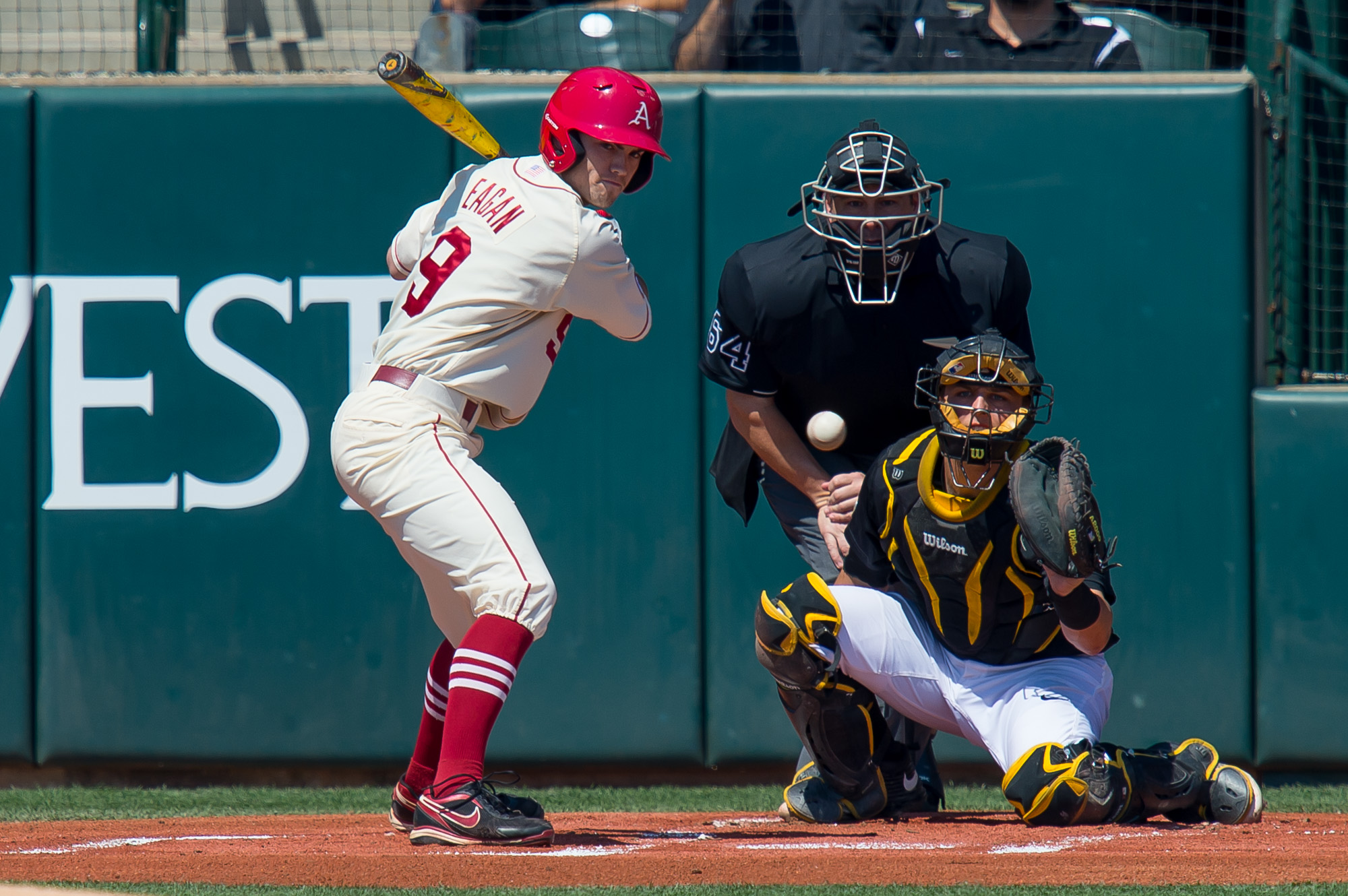 FAYETTEVILLE, Ark. – The 15th-ranked Razorback baseball team came up short in its series deciding game with Missouri Sunday afternoon at Baum Stadium, falling 10-1 to the Tigers for its first weekend series loss at home this season.

The Razorbacks (19-9, 4-5 SEC) scattered six hits in the game scoring just the one run in the bottom of the seventh on a Darien Simms pinch-hit ground out.

Juniors Clark Eagan and Austin Catron both tallied multi-hit games, each going 2-for-4. Catron, who was coming off a career game on Saturday, continued his hot hitting as he is five for his last seven at-bats, two for extra bases, three RBI and three runs scored. For Eagan, it was his 40th multi-hit game of his career and 11th this season.

Missouri (17-13, 2-7 SEC) had two big innings of offense, scoring four runs in the fourth and four runs in the eighth. Arkansas starting pitcher Barrett Loseke was pulled in the middle of the fourth after giving up three runs on two hits, one being an RBI triple by Zach Lavy.

The Razorbacks made things interesting in the seventh. Down 4-0, the Hogs got lead-off singles by Catron and Michael Bernal to put two on with nobody out. After a Tucker Pennell fly out, Eagan walked to load the bases.

Arkansas head coach Dave Van Horn decided to pinch-hit with Simms and got a well-placed groundout to the right side, giving Arkansas its first run of the day and cutting Missouri’s lead to 4-1.

With both runners now in scoring position, the Hogs seemed primed to cut the lead to one as Carson Shaddy lined one right into the right-centerfield gap, but a diving stop by Jake Ring saved both runs and ended the best Hog threat of the day.

Missouri starting pitcher Michael Plassmeyer earned the win after going 3.2 innings, giving up no runs on four hits with five strikeouts. Brian Sharp earned his fourth save of the year, entering the game in the seventh inning and walking just two batters the rest of the way.

The Razorbacks dip back into non-conference play on Wednesday when they travel to Memphis, Tenn., to take on the Memphis Tigers at Auto-Zone Park, home of the St. Louis Cardinals Triple-A affiliate, Memphis Redbirds. First pitch is slated for 6:30 p.m.

“It’s a disappointing day and weekend. When we made a mistake, they took advantage of it; started with yesterday’s ball game leaving guys out there. At the beginning of each game, just the frustration of playing from behind gets to you. We missed a lot of pitches today early, mainly fastballs from pitchers throwing 88-90. They got a couple of big hits, so we have to give them credit. They did a good job. We ended up with around the same amount of hits but they put all of theirs together and we didn’t. Credit their hitters for putting together two really good innings and putting the game away in the 8th. Missouri played extremely well all weekend. They just played better than us.” – Dave Van Horn opening statement

“It was good to see him swinging the bat. Some guys in the top and middle of the batting order didn’t do a lot. Catron picked us up yesterday. We are at the point right now where we have to fight through this and be ready. You will probably see us move (Carson) Shaddy back to the two-hole and it would be nice if Catron could move there and help us drive in some runs.”- Dave Van Horn on Austin Catron

“A game like this, you pretty much have to flush it. Not a lot of positives came out of today. We just have to show up on Wednesday ready to get after someone.”- Clark Eagan on bouncing back next week