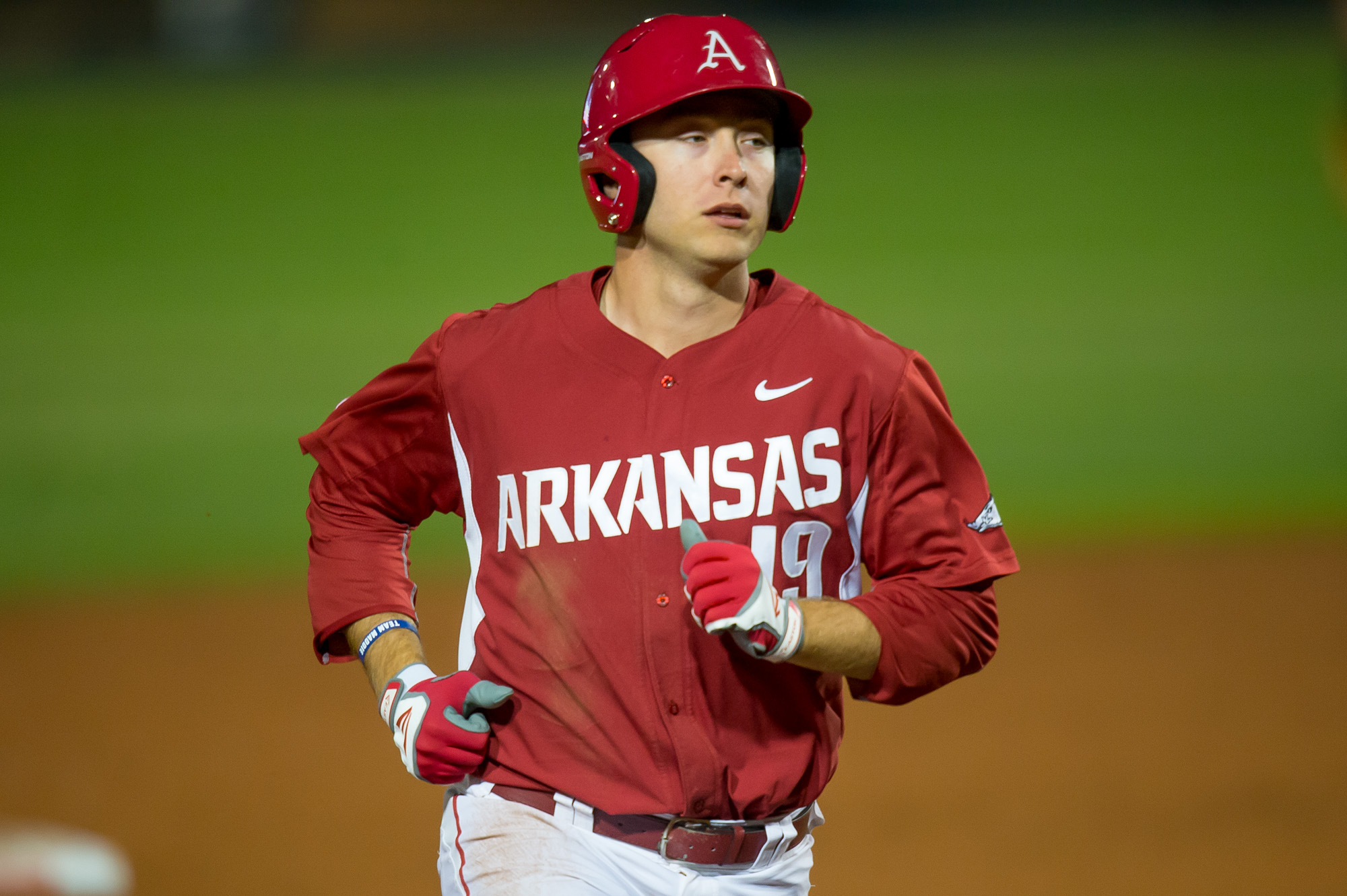 Near-Cycle For Catron, But Missouri Evens Series With Hogs

FAYETTEVILLE, Ark. – Junior Austin Catron was just a double shy of the cycle Saturday night at Baum Stadium, going 3-for-3 with three RBI and two runs scored, but it was not enough to push the No. 15 Razorback baseball team over the Missouri Tigers, falling 8-5 and evening the series.

For Catron, his three-hit night tied a season-high and was his fourth multi-hit game and fifth multi-RBI game of the year.

Along with Catron, catcher Tucker Pennell finished Saturday’s game with a multi-hit performance, going 2-for-4 with a run scored and an RBI. It was Pennell’s fifth multi-hit game of his career and fourth this season.

Missouri jumped on Arkansas starting pitcher Keaton McKinney (1-1) early, touching him up for two runs in the first inning and four runs in the fourth inning, well before Arkansas even tallied its first hit of the night.

Tiger starter Tanner Houck (3-2) held the Arkansas’s lineup hitless through four innings with only one batter reaching base via an error. But then Catron connected with his second home run of the year, breaking up the no-hit bid at the game’s midway point and giving Arkansas new life.

Arkansas went on to score four more runs over the next two innings to cut the deficit to 7-5. Pennell led off the sixth with a single, followed by a Clark Eagan double. Pennell later scored on a Carson Shaddy groundout.

The Razorbacks then plated three in the seventh, two coming off a bases-clearing triple for Catron. It was Catron’s first three-bagger of the year and seventh for the team. The Hogs added their final run two batters later as Pennell notched his second single of the game to score Catron.

Even only being down two with two innings to play, Arkansas could only manage two hits the rest of the way, both coming in the eighth from Cullen Gassaway and Catron. It managed to load the bases after Michael Bernal was hit by a pitch, but could not get the key hit with two outs.

The Hogs and Tigers will play the rubber match of this three-game series on Sunday at Baum Stadium with first pitch slated for 12:30 p.m. The game will be broadcast on the SEC Network.

“I thought we did a good job of battling back. We had a pretty good rally going there and Ryan Howard made a great play and might have saved the game for them. Give credit to (Blaine) Knight giving us a chance and (James) Teague gave us a couple innings. We fought back down 6-0 against one of the best pitchers in the country.” – Arkansas head coach Dave Van Horn on battling back from a 6-0 deficit

“He had a great day. He gets three hits and walked once. He really got into a fastball and hit it over the back wall, and then hit a curve ball for a triple, and then there in the eighth inning he hit right handed and hit a hard ground ball in the six hole and got another hit. That was really good to see. We need his bat.” – DVH on Austin Catron’s near cycle night