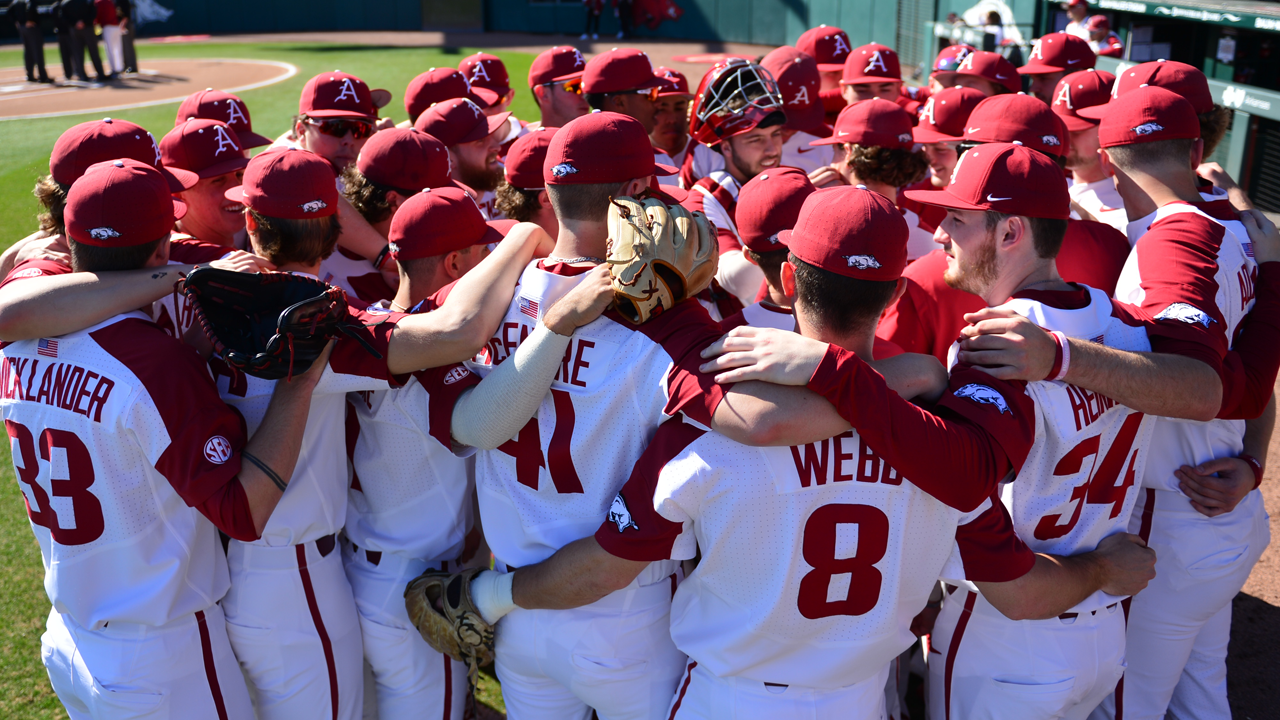 FAYETTEVILLE, Ark. – The No. 13 Arkansas baseball team dropped its first game of the series against South Alabama, 13-6, on Friday afternoon at Baum-Walker Stadium.

The Razorbacks (7-5) lost their fifth straight after allowing 13 runs on 11 hits, scoring six on 10. Arkansas left 13 on base and went 2-for-11 with runners in scoring position against the Jaguars (8-7).

Sophomore lefty Patrick Wicklander got the Friday starting nod for the first time this season, moving up from his spot on Saturdays over the last three weeks, working 3.2 innings. He allowed seven runs on four hits and five walks, striking out three against the Jags to move to 2-2 this season.

The Jaguars scored first with three runs in the opening frame, all three coming with two outs in the inning. Michael Sandle plated two with a homer, then an RBI single from Dakota Dailey brought in another to make it 3-0.

Arkansas answered back with a run in the bottom of the inning to cut it to 3-1. Franklin walked with one out, stole second, then moved to third on a wild pitch, setting up Webb to drive him in with a first-pitch single to left field to make it 3-1. However, South Alabama countered with another two-run home run from Ethan Wilson in the top of the second to push the lead to 5-1.

The Hogs picked up two runs in the bottom of the third to make it a two-run game again. Goodheart & Webb drew back-to-back walks, setting the table for Martin to drive in a run with a double down the left field line. It was his second consecutive game with a double, and it was followed by an RBI groundout from Casey Opitz to bring the game to 5-3.

Unfortunately in the top of the fourth, USA’s Wilson hit another homer, this time a three-run knock, to take an 8-3 advantage. In the fifth, the Jags got an RBI double from Alden Davis, then Kaleb DeLaTorre dropped a shallow pop-up bunt single just out of reach of Jacob Nesbit to score another for a 10-3 lead.

Goodheart put another run on the board for the Hogs with a first-pitch home run over the right field bullpen to begin the fifth for his second homer of the year. The next half inning resulted in two more runs for the Jaguars on a single from Andrew Bates and a fielder’s choice off the bat of Davis to bring the lead to 12-4.

Arkansas loaded the bases with no outs in the bottom of the seventh and brought in a run to cut the deficit to 12-5. Goodheart & Webb singled in back-to-back plate appearances, then Martin battled to a 10-pitch walk before Opitz brought in Goodheart with a sacrifice fly to left-center field. South Alabama got the run back after back-to-back hits in the eighth from Michael Sandle and Dakota Dailey to make it 13-5, then a sacrifice fly from Zack Gregory brought the score to its final at 13-6.

The Razorbacks return for game two against the Jaguars on Saturday, March 7, at 2 p.m., at Baum-Walker Stadium.