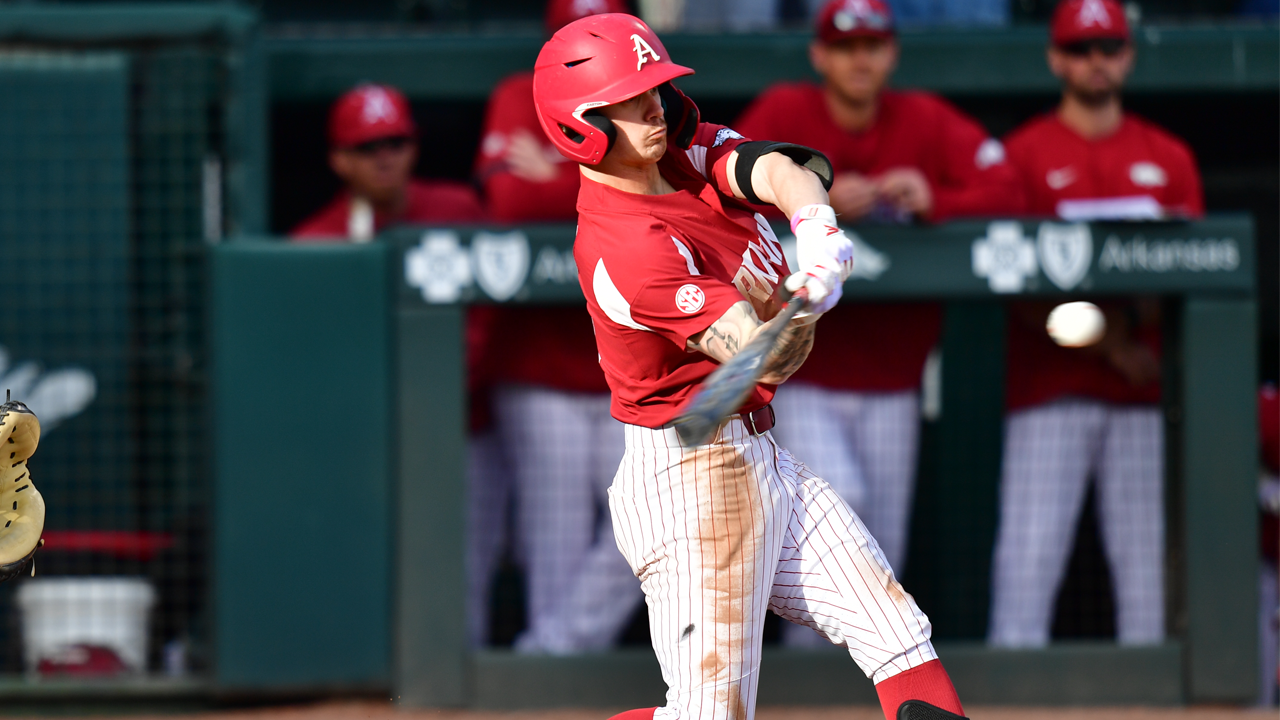 FAYETTEVILLE, Ark. – The No. 13 Arkansas baseball team dropped its first midweek game of the season, 8-7, to Illinois State on Tuesday afternoon at Baum-Walker Stadium.

It was the third-straight game the Razorbacks (7-4) have lost by one run, racking up a season-high 15 hits while stranding 12 runners on base against the Redbirds (4-7). Four different Hogs produced multi-hit games at the plate, with junior shortstop Casey Martin leading the group with four knocks.

It was Martin’s first multi-hit game since the opening weekend finale against Eastern Illinois on Feb. 16 and sixth four-hit performance of his career, last doing so against LSU on May 9, 2019. Christian Franklin (three), Heston Kjerstad (two) and Robert Moore (two) all recorded multiple hits against Illinois State.

Freshman right-handed pitcher Blake Adams got the starting nod in Arkansas’ first midweek game of the year. He tossed 2.0+ innings and was charged with two runs on two hits, walking three and striking out two. He gave way to RHP Kevin Kopps, who picked up the third run of the homer in the third inning. He finished with two runs allowed, one earned, on five hits with five strikeouts. Sophomore lefty Caden Monke (1-1) was credited with the loss after allowing two runs on 1.1 frames of relief in the sixth & seventh innings. A total of 14 pitchers were used in Tuesday’s game between the two teams.

Illinois State got on the board first in the third inning behind a three-run homer from Joe Butler to take a 3-0 lead. In the bottom of the fourth, the Hogs responded with two runs to cut the score to 3-2. After two free passes via a walk to Matt Goodheart & Franklin getting hit-by-a-pitch, Martin laced a double down the left field line to clear the bases and make it a one-run game.

Arkansas plated two more in the fifth take its first lead of the afternoon. Braydon Webb opened the frame with a four-pitch walk, then moved over to third on a single from Moore off the top of the first baseman’s glove. That set up Kjerstad to drive in Webb with a single through the right side of the infield, extending his hitting streak to 11 and tying the game at three. With two away, Martin shot another single through the hole on the left side of the infield to send Moore around third & home to give Arkansas the lead.

It would be short-lived though, as the Redbirds evened the score in the top of the sixth on a sacrifice fly from a pinch-hitting Jake McCaw, driving in Tyson Hays, who singled, moved to second on a sacrifice bunt and then to third on a passed ball. In the seventh, Illinois State added two more on a two-out single from Ryan Cermak to take a 6-4 lead.

The Hogs answered in the home-half of the seventh to pull the deficit to one. Three-straight singles made it happen, as Kjerstad began the frame with a knock up the middle, followed by Goodheart’s hit to right field to move him to third, then Franklin’s single to left field brought him home to make it 6-5. However, Illinois State put up two in the top of the eighth off a two-out RBI single from Jordan Libman for an 8-5 lead.

Down to their final three outs, the Razorbacks rallied with two in the final frame to cut it to 8-7. Franklin & Martin began the inning with back-to-back singles, then a double from Jacob Nesbit scored Franklin and put two in scoring position with one away. A wild pitch would score Martin, but consecutive strikeouts would drop the Hogs to 7-4 on the year.

The Razorbacks continue their six-game home stand with a three-game set against South Alabama on March 6-8 at Baum-Walker Stadium.