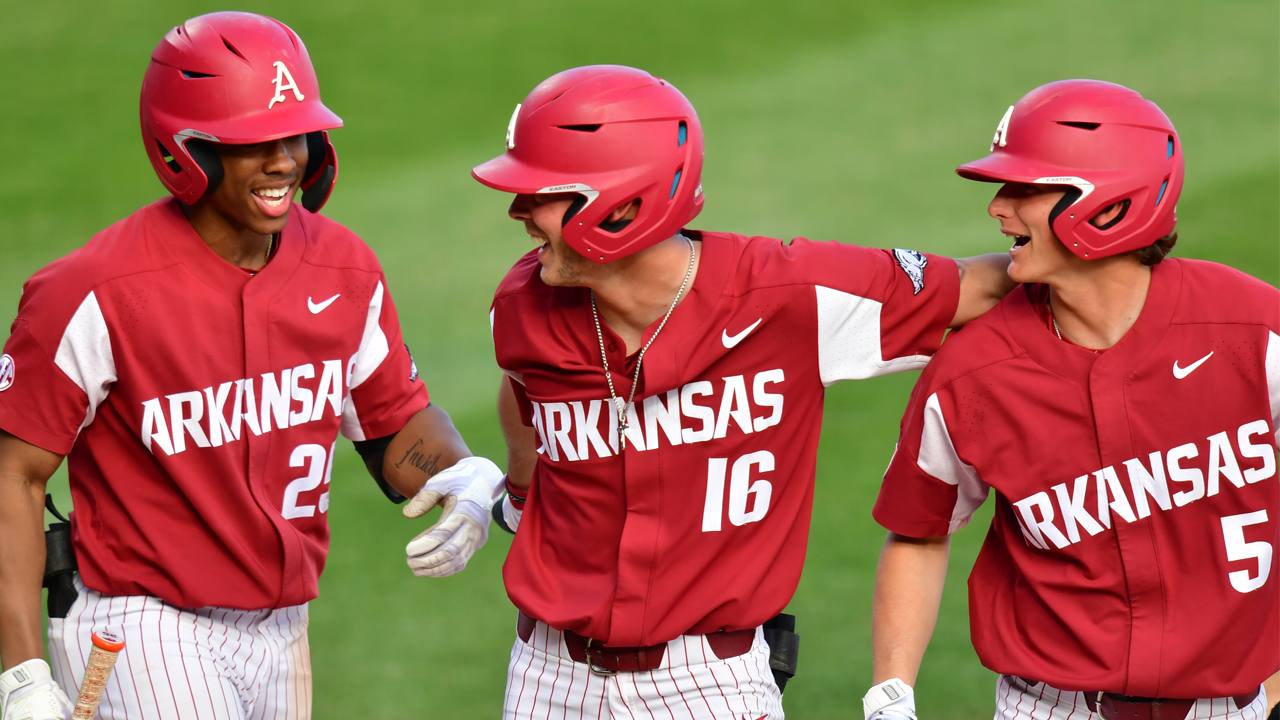 No. 13 Razorbacks Surge to 15-2 Victory Over South Alabama

FAYETTEVILLE, Ark. – The No. 13 Arkansas baseball team got back in the win column with an emphatic 15-2 win over South Alabama on Saturday, March 7, at Baum-Walker Stadium.

A crowd of 12,006 watched the Razorbacks (8-5) rack up a season-high 15 runs and 18 hits to even the series against the Jaguars (8-8). Arkansas’ pitching held South Alabama to two runs on four hits, allowing just one run and two hits over the final eight innings.

Redshirt-sophomore RHP Caleb Bolden made his second start of the year in the second game against the Jags. He went a season-long 6.0 innings, matching his career strikeout high of six to earn his first win of 2020. Freshmen right-handers Will McEntire and Blake Adams finished off the final three innings, retiring every batter they faced, totaling five strikeouts, as McEntire debuted with four strikeouts over the seventh and eighth innings.

Arkansas put its leadoff man on base in each of the first six innings, as 11 different Razorbacks recorded at least one hit, including a season-high six with multiple hits against the Jags. Catcher Casey Opitz led the squad with three hits, all singles, while Cole Austin, Christian Franklin, Matt Goodheart, Heston Kjerstad and Jacob Nesbit all tallied two base hits.

For the sixth-straight game, Arkansas’ opponent struck first, plating one in the opening frame. Back-to-back singles to begin Saturday’s contest from Santi Montiel and Ethan Wilson put runners on the corners, allowing Reid Powers to score Montiel on a groundout for the first run of the day.

The Hogs answered in the bottom half of the inning behind three-straight singles from the top of the order. Franklin began the frame with a knock up the middle, then Kjerstad sent the second pitch he saw through the right side of the infield, followed by an RBI single from Goodheart to center field to score Franklin and even the score at one.

Arkansas added three runs in the next inning to take a 4-1 lead. The Razorbacks loaded the bases with nobody out after Arkansas sandwiched an Opitz single with a pair of HBPs to Braydon Webb and Nesbit. After a strikeout, Franklin drew a full-count, bases-loaded walk to give the Hogs its first lead of the game, then a sacrifice fly from Kjerstad plated another to make it 3-1.

Goodheart got halfway to the cycle in two innings, benefiting from his spot in the order by ripping an RBI double to left-center field with two outs to give the Hogs a three-run lead. In the third, Arkansas plated its fifth run of the day on a bunt single from Nesbit, scoring Robert Moore who walked, moved to second on a stolen base and then third on a single from Opitz.

Opitz finally picked up an RBI in the fifth inning after his third consecutive single. His first two knocks moved runners to third, but his shot up the middle in his third trip to the plate sent Webb from second base home to give the Hogs a 6-1 lead. With the bases loaded after Cole Austin was hit in the 12th pitch of his at-bat and Franklin’s single off the bottom of the right field wall, Kjerstad shot a two-RBI hit up the middle to push the advantage to 8-1.

Another bases loaded opportunity later in the inning with two outs resulted in two more runs for the Hogs thanks to an RBI single from Moore to make it 10-1. Arkansas batted around in the fifth, finishing the frame with five runs on four hits, three walks and a hit-by-pitch.

South Alabama put a couple hits together to lead off the sixth, getting runners on the corners with no outs trying to start a rally, but Bolden induced a 6-4-3 double play to trade the run for two outs, limiting the damage to one run. It wouldn’t matter much, as Arkansas got the run back and then some behind a two-run homer from Austin in the next half inning as part of a two-hit day off the bench. In the eighth, Arkansas added three more, thanks to another two-run homer, this time from a pinch-hitting Curtis Washington Jr., followed by an infield single from Casey Martin to score Bryce Matthews to put the icing on top of a 15-run day at the plate.

It was the first time Arkansas has won this season after trailing.

The Razorbacks and Jaguars wrap up their three-game set on Sunday, March 8, at noon, at Baum-Walker Stadium.