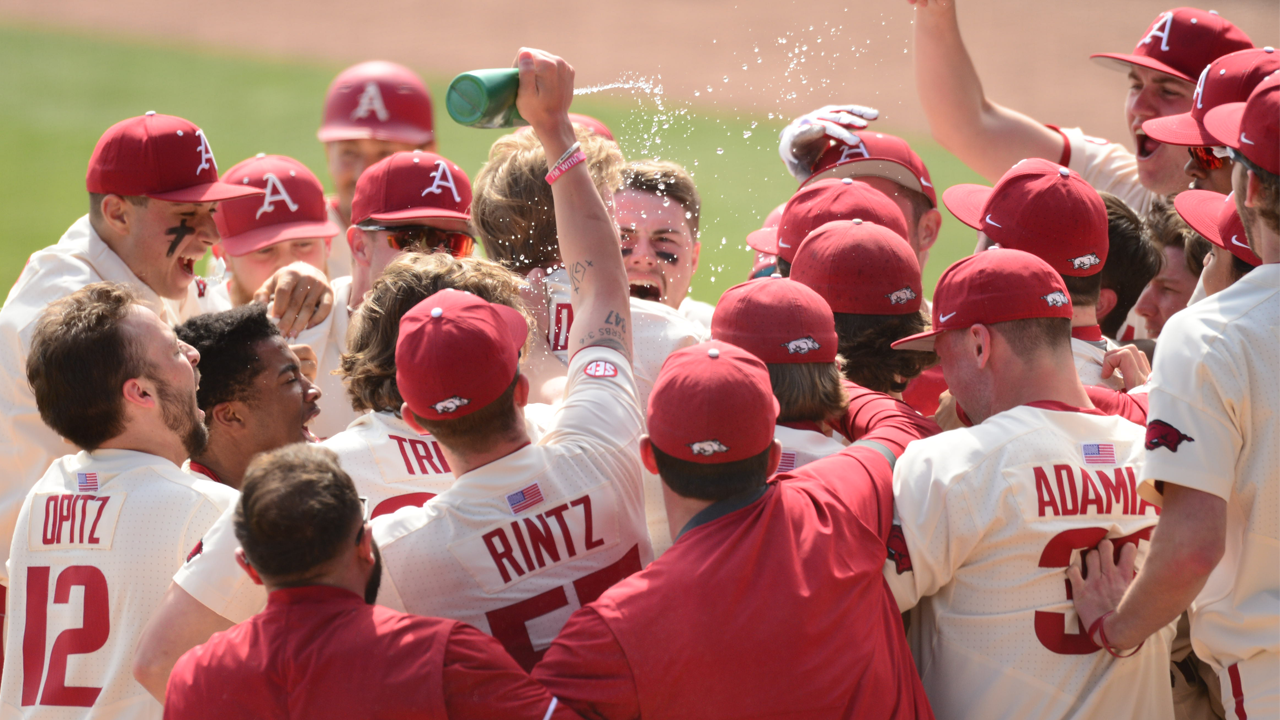 FAYETTEVILLE, Ark. – Heston Kjerstad went yard in the bottom of the ninth inning and the No. 13 Arkansas baseball team claimed a 5-3 victory in Sunday’s series finale against South Alabama at Baum-Walker Stadium.

The two-run bomb was Kjerstad’s sixth of the year and marked Arkansas’ first walk-off win of 2020. It is believed to be the first walk-off home run by a Razorback since Joe Serrano against San Diego State on March 8, 2013.

Kjerstad’s 353-foot dinger came with two outs in the ninth, as Christian Franklin kept the inning alive with a first-pitch single through the left side of the infield to bring up the Amarillo, Texas, junior. Facing a 2-2 count, Kjerstad uncorked a pitch over the right field wall to put a bow on a series win for the Razorbacks (9-5). Franklin (three) and Kjerstad (two) made up five of Arkansas’ six hits in the game, with junior outfielder Braydon Webb tallying the other knock.

He gave way to RHP Elijah Trest, who entered with the game tied at three in the fourth. He tossed three scoreless, racking up four strikeouts with two walks and a hit batter. Another righty, Zebulon Vermillion took over in the seventh with the game still tied at three. He worked three shutout frames of his own, striking out six, earning his first win of the year in the process. The duo of Trest and Vermillion did not allow a hit beyond the fourth inning of Sunday’s game.

For the third time in the series, South Alabama struck first with a run in the opening frame. Ethan Wilson sent a one-out single to left-center field, moved to second on a wild pitch, then scored on a single from Reid Powers made it a 1-0 game. The Hogs got the run back in the bottom half of the inning thanks to a leadoff triple to right field from Franklin, followed by a sacrifice fly to deep left field from Matt Goodheart to even the score.

After a scoreless second inning, the Jags added two runs in the third to take a 3-1 lead. An RBI triple from Kaleb DeLaTorre, plus an RBI groundout from Dakota Dailey put South Alabama ahead by two. Once again, Arkansas answered with two of its own in the home half of the third to knot it up at three. Franklin smacked a solo homer 382 ft. and over the left field wall to make it 3-2, then a two-out single with runners on the corners from Webb brought in Kjerstad from third to bring the score to 3-3. The two sides would play five shutout frames before Kjerstad’s walk-off home run in the ninth inning.

The Razorbacks continue their six-game home stand with a two-game set against Grand Canyon, starting with Arkansas’ first home night game of the year on Tuesday, March 10, at 6:30 p.m., at Baum-Walker Stadium.