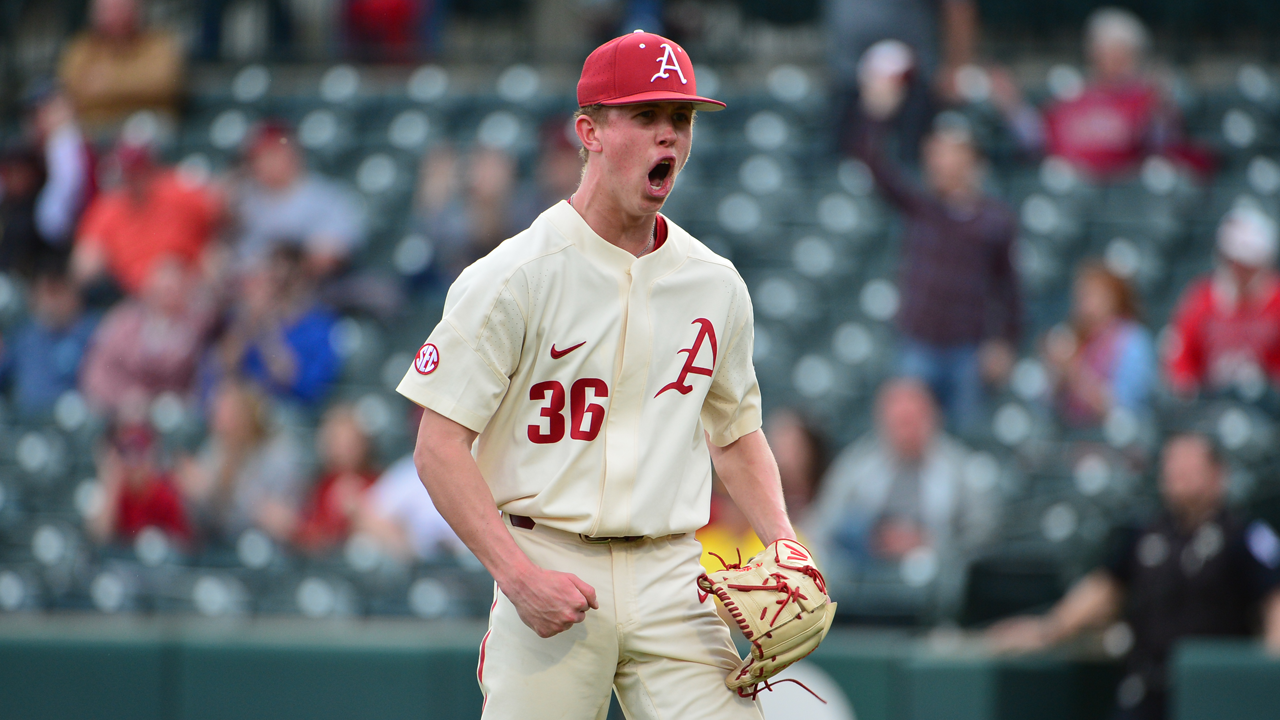 FAYETTEVILLE, Ark. – A double play confirmed under review was registered as the final out of the 700th career win for head coach Dave Van Horn at Arkansas, as the No. 14 Arkansas baseball team defeated Grand Canyon, 10-9, Tuesday afternoon at Baum-Walker Stadium.

The Razorbacks (11-5) took the lead in the second inning and never trailed again, getting timely hits and solid pitching when the game turned into a one-run affair in the fifth and seventh innings. Arkansas finished the game with 10 runs on 11 hits, tallying nine strikeouts in the contest.

Four Hogs racked up multi-hit games, with Casey Martin enjoying a 3-for-5 day at the plate, which included four RBIs and two runs scored. He was joined by Heston Kjerstad, Matt Goodheart and Robert Moore with two hits each. Goodheart (three) and Moore (two) also recorded multi-RBI performances, while Kjerstad, Goodheart & Martin all scored twice on Wednesday.

Junior right-handed pitcher Kevin Kopps started Wednesday’s game, only going 1.2 innings, giving up three runs on three hits, with one walk and two strikeouts. He exited with the game tied at three, as he was relieved by lefty Zack Morris, who tossed 2.1 innings of scoreless ball, allowing just one hit and one walk, with one strikeout over nine batters faced. He would pick up his first win of the year and fellow freshman Peyton Pallette earned the save after pitching the final two frames of the game, walking two and striking out one for his first save of his career.

The Antelopes got on the board in the opening inning with two runs behind a home run from Juan Colato. Arkansas wouldn’t trail for long, as Casey Martin uncorked a three-run homer into the home bullpen in left field in the bottom half of the inning to put the Hogs up, 3-2. Kjerstad and Goodheart reached in back-to-back trips to the plate via a single and a walk, setting the table for Martin to hit his second home run of the year. However, GCU would counter in the second inning with a solo homer of its own from Jonny Weaver to knot up the score at three.

Three more runs came around to score for the Hogs in the bottom of the second, breaking the tie to give Arkansas a 6-3 lead. The Hogs loaded the bases with one out thanks to a hit-by-pitch (Jacob Nesbit), a single (Christian Franklin) and a fielder’s choice/fielding error (Kjerstad), allowing Goodheart to drive in two with a single to right field and Martin to score another on an RBI infield single for a three-run lead.

Grand Canyon plated two in the top of the fifth to cut the Arkansas lead to 6-5. It was a double-decker sandwich of an inning, as Mark Adamiak struck out the first batter he faced, then allowed two singles, followed by a strikeout from Marshall Denton, as well as two more GCU singles, both bringing in runs, wrapping up the inning with a third strikeout by the Hogs to limit the damage to two runs.

In the sixth, Arkansas pushed the lead back to five, kicking off the frame with monster solo home run from Goodheart over the videoboard in right field. It was his third homer of the year and launched the Hogs into a five-run sixth inning. Arkansas loaded the bases after the homer, then Moore roped a two-RBI single, followed by a strikeout-wild pitch to push the lead to 10-5.

A trio of free passes contributed to Grand Canyon scoring four in the seventh inning. Colato (HBP) and Drew Smith (BB) reached in consecutive at-bats, then after a one-out single, Cuba Bess was walked to bring in a run. Then, a pair of two-out singles from David Avitia and Weaver pulled the score to 10-9. GCU threatened in the final frame with two on and one out, but Pallette induced a 5-4-3 double play to end the game and put Arkansas 2-0 on the week heading into the start of conference action.

Up next, the Razorbacks open SEC play on the road at No. 17 Mississippi State on March 13-15 in Starkville.

What an achievement for all of the players, staff & coaches at Arkansas over the last 18 years. And of course, @VanHornHogs!