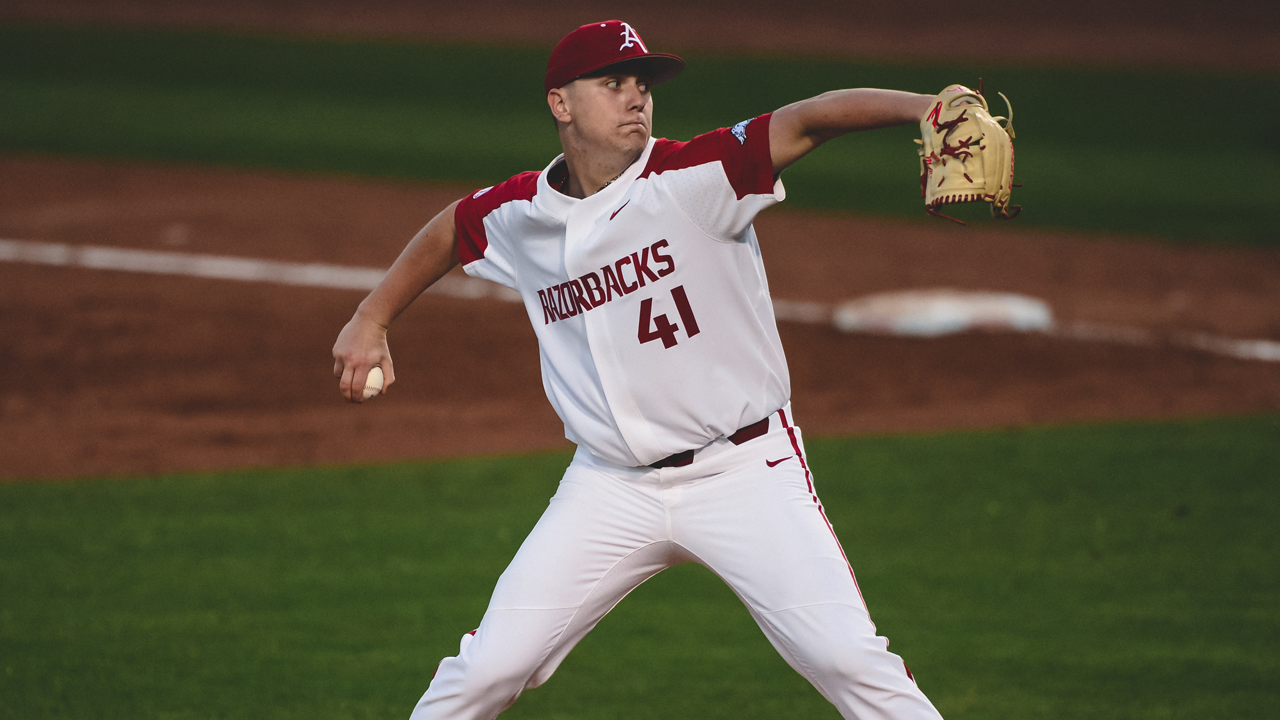 No. 14 Razorbacks Slice 12 Hits in Win over Lopes

FAYETTEVILLE, Ark. – The No. 14 Arkansas baseball team opened its midweek series against Grand Canyon with a 6-1 victory on Tuesday night at Baum-Walker Stadium.

The Razorbacks (10-5) recorded 12 hits in the game, all singles, suppressing the Antelopes (9-8) to just one run on eight hits, with no walks allowed. It was the second time this season Arkansas has not issued a walk to an opponent, also doing so against Oklahoma on Feb. 28 in Houston.

Freshman right-handed pitcher Will McEntire made his first start as a Razorback in Tuesday’s contest against Grand Canyon. The Bryant, Arkansas, native worked 6.0 innings, allowing one run on seven hits, with no walks and three strikeouts. He faced 22 batters, with only two hitter’s counts reaching three balls, earning his first win of the year. Sophomore lefty Caden Monke tossed the final three innings, giving up just one hit, retiring the last eight batters he faced, with three strikeouts to earn his first save of the year.

Four Razorbacks recorded multi-hit games against Grand Canyon, with Heston Kjerstad and Robert Moore each tallying three. Matt Goodheart and Braydon Webb both had two hits in the contest, as Arkansas had double-digit hits for the fourth time in five games.

For the first time in seven games, the Hogs drew first blood, plating four in the second inning for a 4-0 lead. Arkansas had five consecutive batters reach via four-straight singles and a fielder’s choice to quickly put up three runs. Webb & Casey Opitz hit knocks to opposite sides of the field, setting up Jacob Nesbit to drive in Webb with a single down the first base line to make it 1-0. Shortly after, Moore shot one up the middle off a pair of Lope’s gloves, sending Opitz home, then Nesbit would score on a fielder’s choice to make it 3-0. With two away, Goodheart posted the fifth single of the inning to drive in Cole Austin to complete the four-run frame.

GCU got a run back in the top of the third behind a solo home run from David Avitia to cut the lead to 4-1. It was the first run allowed by McEntire this year.

Arkansas erased it in the bottom of the fourth on a sacrifice fly from Opitz after singles from Kjerstad and Goodheart, getting Martin on first via a fielding error to push the lead to 5-1. In the fifth, Kjerstad roped his third hit of the night through the right side of the infield to score Moore, who opened the inning with a single, to go up, 6-1. The final four frames featured all goose eggs on both sides, as Arkansas improved to 3-0 all-time against Grand Canyon.

The Razorbacks and Antelopes wrap up the two-game set on Wednesday at 3 p.m., at Baum-Walker Stadium.