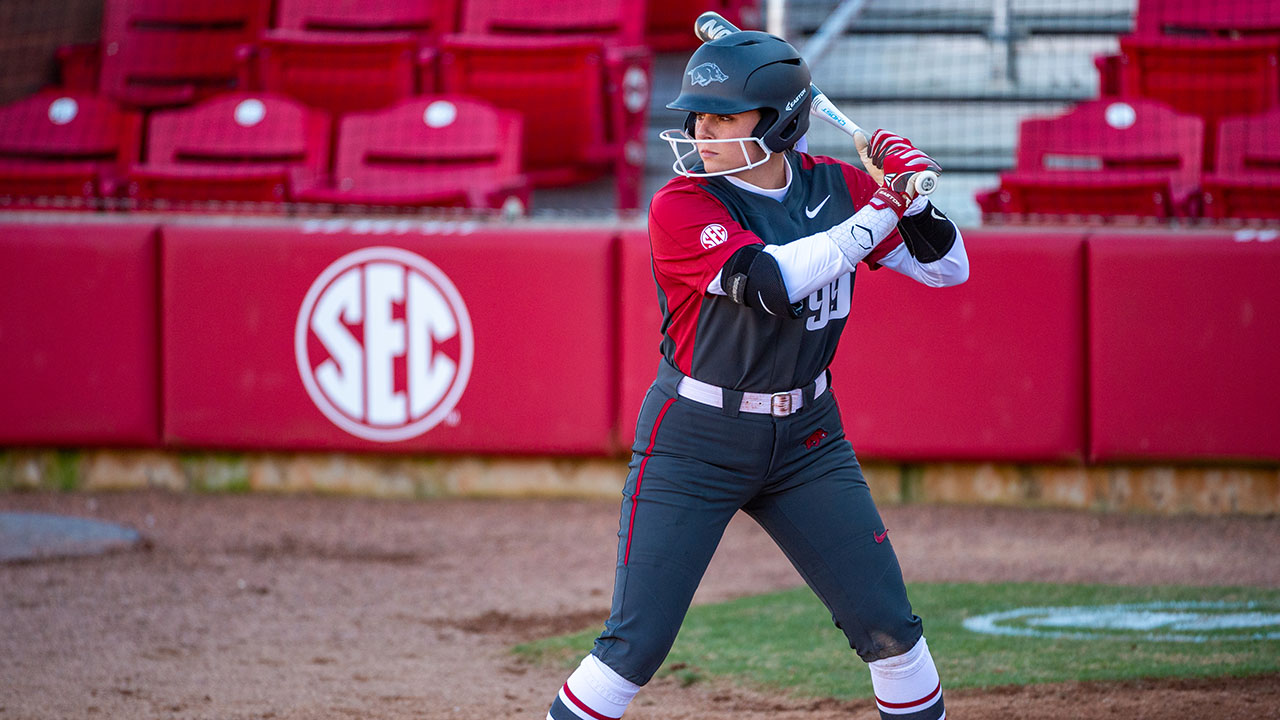 No. 20 Razorbacks and Jayhawks Meet in Non-Conference Doubleheader

FAYETTEVILLE, Ark. – After opening Southeastern Conference play on the road last weekend, the No. 20 University of Arkansas softball team (17-6) plays host to Kansas (13-11) in a non-conference doubleheader on Tuesday, March 10 at Bogle Park. The first game of the twinbill is set for a 3 p.m. first pitch with the second game following approximately 35 minutes after the conclusion of game one. Both games can be seen on SEC Network+.

Senior pitcher Autumn Storms is playing her final season in Fayetteville and has picked up where she left off last year as an NFCA All-American Second Team selection. This season Storms is 13th in the nation in victories (10), 24th in strikeout-to-walk ratio (6.44), 30th in walks allowed per seven innings (0.96) and 24th in ERA (1.07). Her 10 victories lead the league and 59 career wins rank third in program history.

Freshman pitcher Jenna Bloom has been one of the best nationally in missing bats. She has fanned 58 in just 36.2 innings of work which ranks 10th nationally in strikeouts per seven innings (11.1). The Huntington Beach, Calif. product is the only freshman that to rank inside the top-15.

The Razorbacks opened SEC play with a 1-0 victory on Friday (March 6) night at No. 9 Alabama and won the program’s first game in Tuscaloosa since 2000. Storms was sensational and registered a complete game shutout. Junior Danielle Gibson recorded the game winning RBI in the top of the seventh inning on a single to right field which capped off a career-best four hit night. Arkansas dropped the next two games of the series 10-2 (6 innings) and 9-1 (6 innings).

The Jayhawks enter Tuesday riding a five-game winning streak as they blasted the field at the Rock Chalk Challenge. Kansas has scored 10 or more runs in each of their last four games and most recently defeated Wichita State 10-7 on Sunday, March 8. Brittany Jackson leads the team hitting .403 while Shelby Gayre has produced the home runs (10) and RBIs (23). KU has struggled inside the circle with its 6.80 team ERA ranking last in the Big 12 Conference. The Jayhawks were picked to finish seventh among the seven softball playing members of the Big 12.

The Jayhawks lead the all-time series against the Razorbacks 17-7 and will be meeting for the first time in Fayetteville since 2006. Kansas won the last meeting, 4-3, in a standalone neutral site game in 2015. The series used to be a fixture of the non-conference slate as the two met for a midweek doubleheader every season from 1998 through 2007. KU has an 8-2 series lead when playing in Fayetteville.