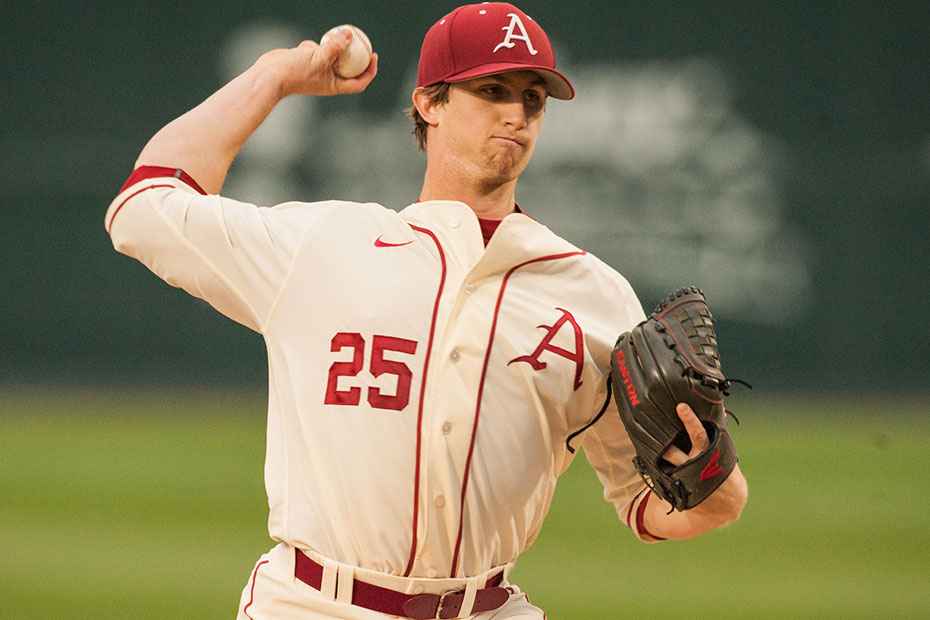 No. 22 Razorbacks Ready For Opening Weekend

Follow Live
All three games will be available on SEC Network+ and the WatchESPN App with Alex Perlman (PXP) and Troy Eklund (Analyst), while Phil Elson (PXP) and Rick Schaeffer (Analyst) will have the call on IMG Sports Network on Friday and Saturday. Scott Inman will join Schaeffer on the call Sunday afternoon for the series finale.

Leading Off
• Arkansas enters the season ranked in four preseason polls, highlighted by the No. 22 spot in both the USA Today Coaches poll and the USBWA poll. Arkansas played its last 24 games in 2015 ranked in the top 25.
• Arkansas was tabbed to finish third in the SEC West in the preseason SEC Coaches Poll released on Thursday.
• The Razorbacks are 45-11 in season openers since the 1960 season, including 21 consecutive wins. Arkansas is 13-0 in season openers under coach Van Horn, out-scoring its opponents 114-31 along the way.
• Arkansas has opened its season at Baum Stadium in each of the last eight years dating back to 2008, compiling a 22-2 record, while winning all eight three-games series.
• Fueled by a 91-15 (.858) mark under coach Van Horn, Arkansas is 256-75-1 (.771) all-time in the month of February.
• Entering this weekend’s series against Central Michigan, the Razorbacks have won 15 straight and 19 of their last 20 at Baum Stadium in February. Under coach Van Horn, Arkansas is 68-5 at Baum Stadium in February, winning its first 21 games under the skipper.

Quick Hits
• The Razorbacks have won 40 or more games in six of the last seven seasons.
• Arkansas is the only team in the SEC to advance to each of the last 14 NCAA Regionals, and head coach Dave Van Horn is the only current head coach in the league to make six appearances in the College World Series.
• Arkansas had four players selected in the 2015 MLB Draft, as Andrew Benintendi went seventh overall to the Boston Red Sox, Trey Killian went in the ninth round to the Colorado Rockies, Bobby Wernes went in the 30th round to the Houston Astros and Tyler Spoon went in the 35th round to the Boston Red Sox. The Razorbacks have had 21 players drafted in the last the years.

Scouting Central Michigan
• The reigning MAC West champs, Central Michigan was picked to defend their title in the preseason coaches’ poll released on Wednesday.
• The Chippewas posted a 35-22 record last year, including a 20-7 mark in MAC play.
• Friday starter Sean Renzi began last season in the bullpen before emerging as the staff ace during the conference regular season en route to earning All-MAC first team honors.
• Central Michigan visited Baum Stadium in 1998 for the only two meetings between the two programs. Arkansas won the two mid-week non-conference tilts, 4-2 and 7-2, respectively.