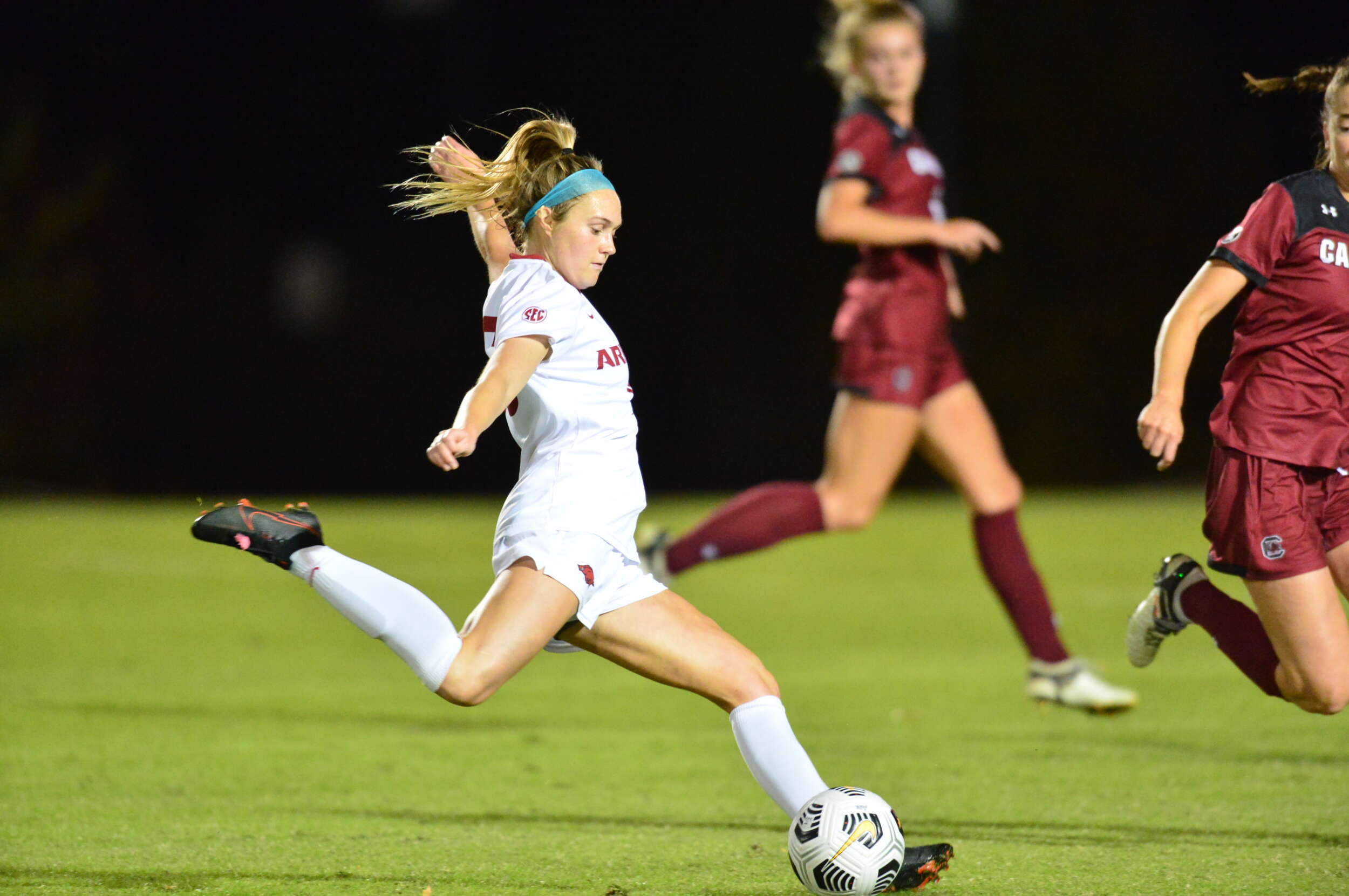 FAYETTEVILLE, Ark. –No. 3 Razorback Soccer (4-1) fell to No. 15 South Carolina (4-1) on Friday night at Razorback Field, 2-1. It was Arkansas’ first loss of the year despite outshooting the Gamecocks, 14-8, with half of those coming on target.The Razorbacks dropped just their second home match in 24 games over the last three seasons.

>> Gamecock forward Corinna Zullo put South Carolina up in the 37th-minute as she headed home a ball from Rylee Forster.

>> Anna Podojil netted her third goal of the season after she stepped in front of a clearance attempt from the Gamecock goalie. Her tackle sent the ball to the back of the net in the 57th-minute for the equalizer.

>> South Carolina found the game-winner in the 71st-minute on a breakaway goal from Samantha Chang. Catherine Barry and Claire Griffiths connected on the counter and Griffiths gave Chang theball in space as she was able to find the back of net.

The Razorbacks had most of the looks in the opening 15 minutes, primarily coming off corner kicks. Shots by Arkansas defenders Bryana Hunter (2nd-minute, blocked)and Haley VanFossen (15th-minute, saved) were denied by the South Carolina defense.

In the 32nd-minute Taylor Malham found space on the flank and tried to beat the ‘keeper near post but the shot ended up going wide right. Zullo opened the scoring for the Gamecocks in the37th-minute with her header.The Razorbacks found themselves down for thefirst time this season at half as the two teams headed to the locker room.

Just 10 minutes into the second half A. Podojil evened the scoring after getting in the way of an attempted clearance by the South Carolina ‘keeper. However, the Gamecocks went ahead almost 15 minutes later off the boot of Chang in the 70th-minute for her first goal of the season.

The Razorbacks continued to pile numbers forward but weren’t able to find the tying goal.

The Razorbacks will be back on the road with a chance to pick up points in the West Division title race as they travel to face Ole Miss. Kickoff is scheduled for Sunday, Oct. 25 at 3:00 p.m. CT in Oxford, Miss.