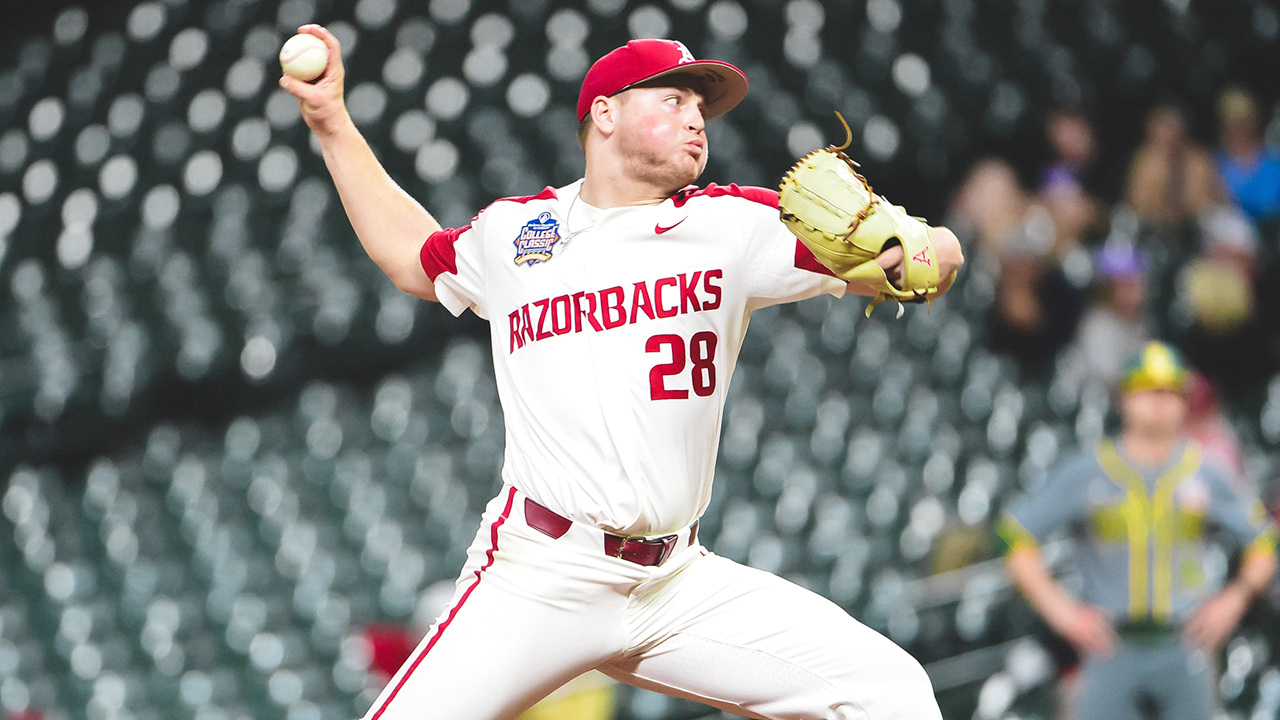 No. 6 Razorbacks Close Out Shriners Classic With Loss to Baylor

HOUSTON, Texas – The No. 6 Arkansas baseball team wrapped up its third trip to the Shriners Hospitals for Children College Classic with a 3-2 loss to Baylor on Sunday night at Minute Maid Park.

The Razorbacks (7-3) recorded eight hits, scoring their two runs of the night in the bottom of the eighth. Arkansas left nine runners on base, with at least one in each of the first eight innings.

Juniors Heston Kjerstad and Braydon Webb both put together multi-hit performances at the plate, with Webb tallying three singles in the game. It was Kjerstad’s third consecutive game with two or more hits, finishing the weekend with seven total. Five Razorbacks had a hit against the Bears (8-3).

Junior right-handed pitcher Kole Ramage started Sunday’s Shriners College Classic finale, going 5.0 strong innings against the Bears. He allowed two runs on four hits, walking one and striking out six, one shy of a career-high. He would get charged with the decision to fall to 1-1 on the year.

After three scoreless innings, Baylor broke through in the top of the fourth behind an RBI single from Davion Downey. He brought in Mack Mueller, who walked and then moved over to second on a wild pitch with one out in the frame. The Bears added another in the fifth on a pair of back-to-back two-out hits, first a single from Ricky Martinez, then a double by Nick Loftin to score him for a 2-0 lead.

Baylor scored for its third-straight inning in the sixth on a one-out solo home run from Downey to go up, 3-0. The Bears would threaten later in the frame with runners on the corners, but Elijah Trest held them off with a strikeout to keep it a three-run game. Trest worked 1.2 frames, allowing two hits, one run, with one walk and two strikeouts.

LHP Caden Monke and RHP Zebulon Vermillion tossed the final 2.1 innings of the game, facing seven batters between the two and striking out five without allowing a baserunner.

The Bears stifled the Hogs with stellar defensive plays throughout the night, but Arkansas finally broke through in the eighth with two runs to make it a 3-2 game. Kjerstad began the frame with an infield single off the glove of the shortstop. Then, Matt Goodheart ripped a double to the gap in right-center field to drive him in for the first Hog run of the night. With two away, Webb smacked an RBI single to left field and Goodheart put on the wheels to score to bring it to a one-run game. Unfortunately, the Hogs couldn’t get the final run across to drop to 0-3 on the weekend.

The Razorbacks return home for the first midweek game of the year, squaring off with Illinois State on Tuesday, March 3, at 3 p.m., at Baum-Walker Stadium.