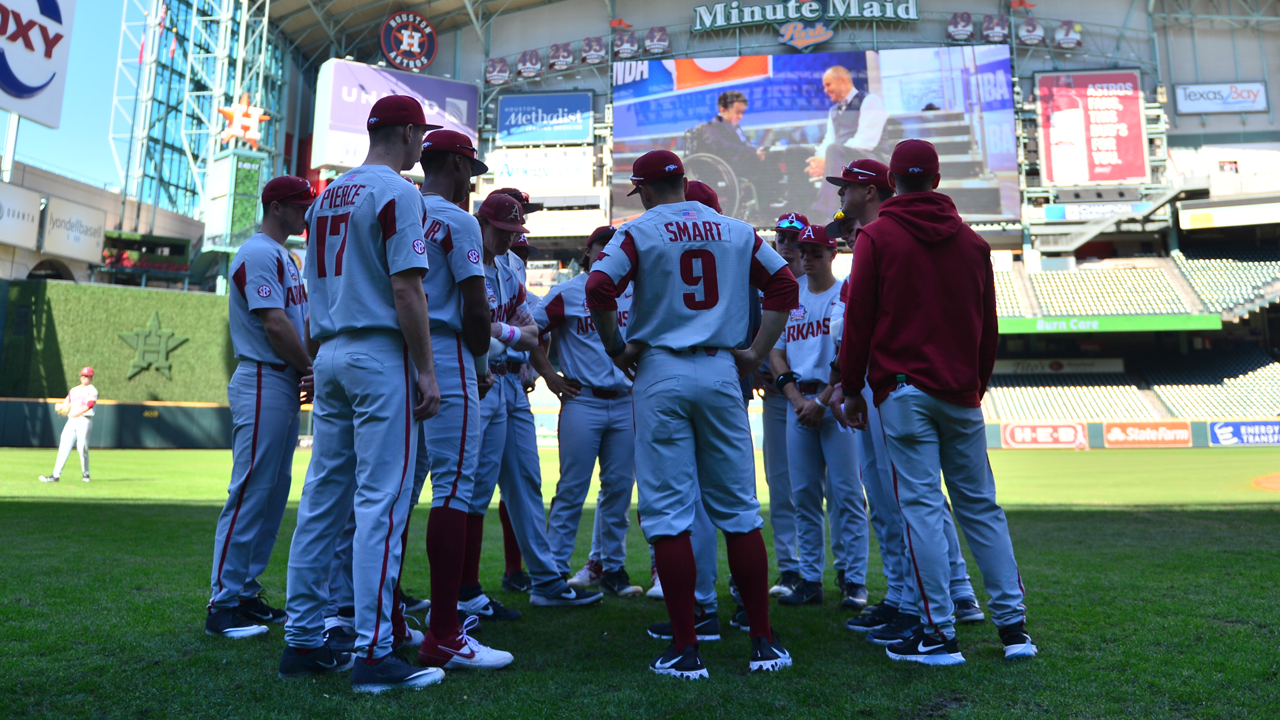 No. 6 Razorbacks Drop Shiners Opener to No. 22 OU

HOUSTON, Texas – The No. 6 Arkansas baseball team suffered its first loss of the season, falling 6-3 to No. 22 Oklahoma on Friday afternoon at Minute Maid Park in Houston, Texas.

The Razorbacks (7-1) battled from behind to take a 3-2 lead, but a couple fielding mistakes with the game tied was the difference against OU (8-2), as Arkansas allowed three runs in the seventh to drop its first game of the Shriners College Classic.

He gave way to RHP Kevin Kopps, who entered with a runner on first in the sixth, allowed one in the frame, then retired the next two batters to keep the game tied at three. He received the decision after allowing three runs, all unearned, on three hits.

For the first time this season, Arkansas did not draw first blood, as Oklahoma plated a run in the bottom of the second for a 1-0 lead. With one away, OU put two in scoring position with a single and a double, allowing Trent Brown’s sacrifice fly to center field to score Brady Harlan for the first run of the game. Oklahoma brought in another run afterward on an RBI groundout from Brady Lindsly, scoring Tanner Tredaway after he doubled and moved to third on a passed ball.

The reigning SEC Player of the Week Robert Moore evened the score in the top of the fifth thanks to a two-run home run to right field. His second homer of the season scored Cole Austin (single) to tie the game, then Jacob Nesbit put his first dinger of the year in the Crawford boxes in left field six pitches later to give the Hogs a 3-2 lead.

It was the second time this season Arkansas has hit back-to-back homers in a game, last doing so in the season opener behind knocks from Christian Franklin and Heston Kjerstad. However, a home run from Oklahoma’s Lindsly in the bottom of the sixth inning tied the game back up at three.

OU quickly put runners on the corners with nobody out in the bottom of the seventh behind a two-base error and a fielder’s choice sac bunt. A single from Brandon Zaragoza through the left side of the infield gave Oklahoma the lead, 4-3, then another single from Tanner Tredaway loaded the bases with no outs. After a strikeout, OU added two more on another single to left field, then an errant throw allowed another runner to score to push the lead to 6-3.

Kjerstad and Nesbit both finished the game with two hits each, as Arkansas totaled 10 in the game.

The Razorbacks return to action on Saturday in primetime against Texas at 7 p.m. at Minute Maid Park.