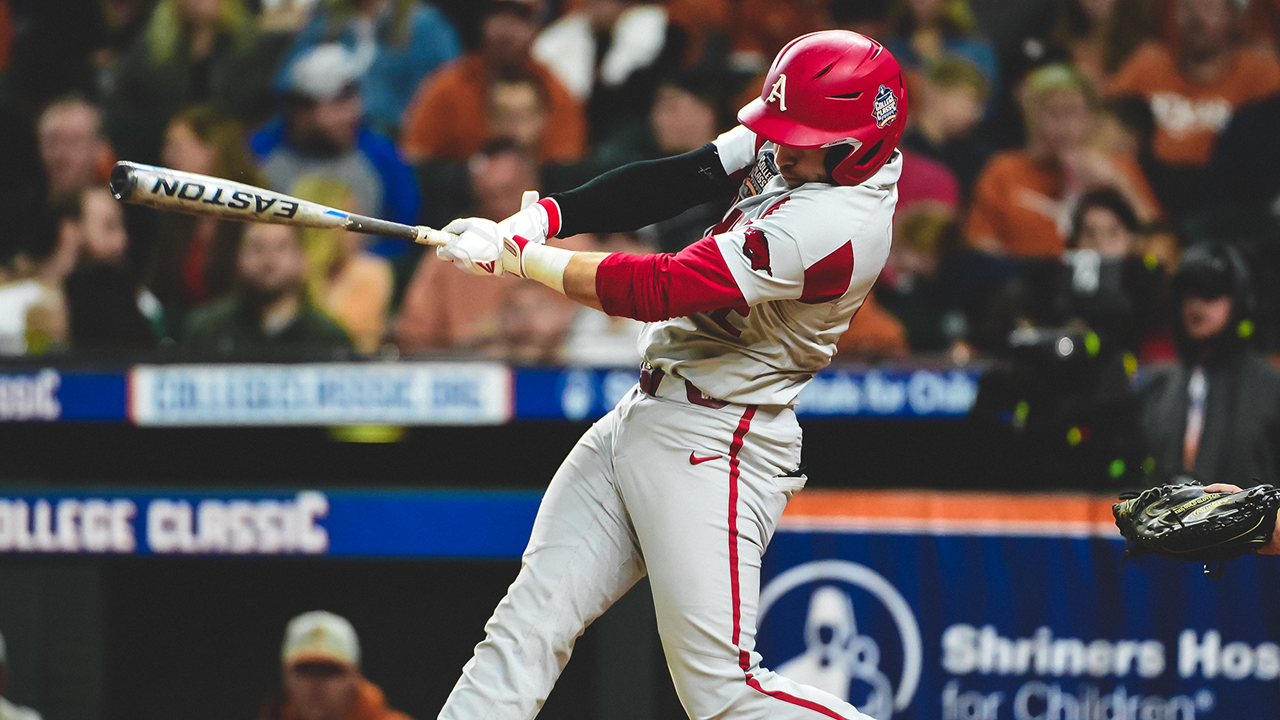 No. 6 Razorbacks Fall to Texas in Shriners Night Cap

HOUSTON, Texas – The No. 6 Arkansas baseball team battled to nearly overcome an eight-run deficit, but left the tying run on second base in Saturday night’s 8-7 loss to Texas at Minute Maid Park.

The Razorbacks (7-2) couldn’t complete the rally from eight Longhorn (10-1) runs over the first two innings in the second game of the Shriners College Classic, scoring in four of the last five innings to cut it to a one-run game. Arkansas finished the contest with seven runs on 10 hits, allowing eight on 10 hits with four errors to Texas.

Heston Kjerstad (three) and Casey Opitz (two) both came away with multi-hit performances at the plate, while Matt Goodheart drove in two runs in the ninth on a ball that needed about three more feet to clear the right-field wall and tie the game.

Sophomore left-handed pitcher Patrick Wicklander got the start and had a tough night on the mound, allowing six runs, four earned, on five hits and a walk over 1.0+ innings of work. It was his first loss of the season and first time this season to give up a run scored.

Redshirt-sophomore RHP Caleb Bolden calmed things down on the mound for the Hogs, putting together 4.0 scoreless frames, allowing just two hits while striking out five. Right-hander Jacob Burton followed him for two innings, as he struck out the side in the seventh inning and worked out of a two-runner jam in the eighth.

Texas opened the scoring in the bottom of the first thanks to a pair of errors, scoring two unearned runs for a 2-0 lead. After a leadoff single from Austin Todd, Eric Kennedy reached on a fielding error, then a single from Zach Zubia scored Todd for the first run of the night and moved Kennedy to third on an errant throw. In the next at-bat, the Hogs would trade a 6-4-3 double play for a run to make it 2-0.

The Longhorns added six in the second inning, starting the frame with three-straight singles, the third coming from Douglas Hodo up the middle to score Texas’ third run of the game. With the bases loaded, no outs and a pitching change, Texas got an RBI groundout, a sacrifice fly, a two-run homer from Zach Zubia, then another error with runners on first-and-third to go up 8-0.

Arkansas scored a run in the top of the fifth after Zack Gregory’s RBI single to right-center field scored Moore all the way from first base. It was Gregory’s first RBI of the season.

The Hogs scratched across two runs in the sixth, starting with Kjerstad’s fifth homer of the year, as he sent a solo shot just to the left of the batter’s eye to make it 8-2. A strikeout-wild pitch to Opitz occurred later in the frame, then he would be scored from first on an RBI double from Moore to cut the deficit to 8-3.

In the seventh, Arkansas scored two more for its third consecutive scoring inning. Cole Austin opened the frame with a five-pitch walk, then scooted over to second on a wild pitch, giving Christian Franklin the opportunity to drive him in with a double to left field. Shortly after, Kjerstad sent the second pitch he saw up the middle to drive in Franklin to make it a three-run game. Franklin & Kjerstad are the only Hogs with a hit in all nine games this season.

Arkansas wouldn’t go quietly, adding two more runs in the ninth to make it an 8-7 game. Franklin got the inning going with a walk, then moved to third a pitch later after Kjerstad’s single to right field. With a 1-0 count, Goodheart rocketed a double off the yellow stripe on the right field fence to clear the bases and put the tying run 180 feet away. Unfortunately, the Hogs couldn’t convert to fall to 0-2 at this year’s tournament.

The Razorbacks close out the 2020 Shriners College Classic against Baylor on Sunday at 7 p.m. at Minute Maid Park.