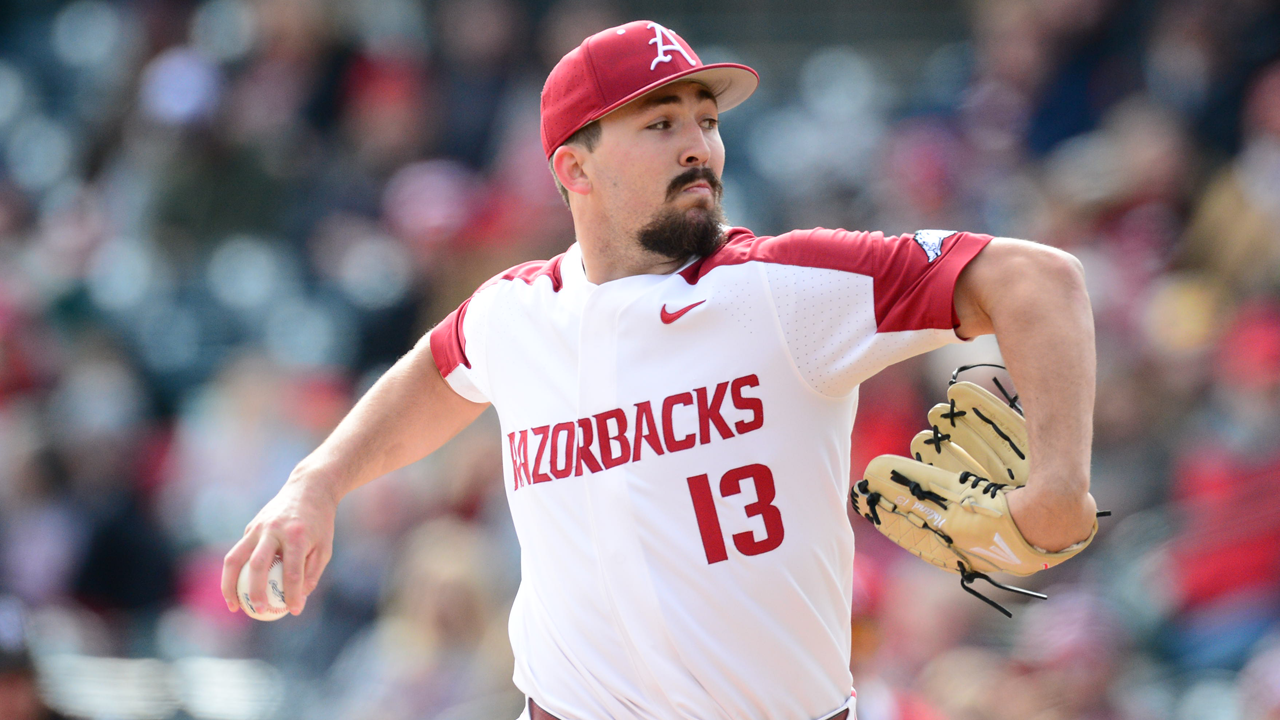 FAYETTEVILLE, Ark. – The No. 7 Arkansas baseball team kicked the 2020 season off with a bang, rolling to a 5-1 victory over Eastern Illinois on Friday afternoon at Baum-Walker Stadium.

The Razorbacks (1-0) used three homers and 13 strikeouts to stay perfect under head coach Dave Van Horn on Opening Day. Arkansas hasn’t lost its season opener since 1994, facing the Panthers (0-1) in the first series for the second consecutive year.

Sophomore right-handed pitcher Connor Noland got the Opening Day starting nod from coach Van Horn and was electric, tossing 6.2 innings to set the tone for the Hogs on Friday. The Greenwood, Arkansas, native struck out half of the batters he faced, fanning a career-high 11 while allowing just two hits and one run, unearned, to cap a solid first outing.

The Hogs struck first in the opening frame thanks to an RBI single from outfielder Heston Kjerstad. The inning began with a full-count leadoff walk to outfielder Braydon Webb, who was quickly moved over to second on a failed pickoff attempt. From there, Kjerstad sent a one-out single to left field to drive in Webb for the first run of the day.

It was part of a three-hit day for Kjerstad, his 49th of his career. His other two hits were homers.

In the fifth inning, Webb worked a full-count into a two-out single and the Hogs made the Panthers pay for it, launching a pair of back-to-back homers over opposite bullpens to push the lead to 4-0. Outfielder Christian Franklin gets to hold the honor of “first home run of the year” for Arkansas in 2020, as he turned on a 1-0 pitch and drove it to the back of the premium seats in left field. Five pitches later, Kjerstad hit a solo shot into the right field bullpen to hang a crooked number on the Panthers.

After surrendering a run in the top of the seventh on a two-out error, Kjerstad erased the score by lifting a solo dinger high down the left field line and into the Arkansas bullpen for a 5-1 lead. It was the fifth time in his career he’s hit multiple home runs in a contest, last doing so against No. 18 Tennessee on April 27, 2019. He now sits in a tie for 10th in career homers at Arkansas with 33.

Redshirt-junior right-handers Marshall Denton and Kevin Kopps took over on the mound after Noland, as both allowed just one hit & recorded a strikeout over 1.1 and 1.0 frames of work, respectively. Redshirt-senior Cole Austin, playing in his first game for the Razorbacks after transferring from Arizona State, also produced a multi-hit game with a single in the second inning and a double in the eighth. He recorded 31 multi-hit performances during his two-year stint at West Virginia before becoming a Sun Devil.

The Razorbacks are back in action on Saturday, Feb. 15, at 2 p.m. at Baum-Walker Stadium, for game two of the three-game set against the Panthers.