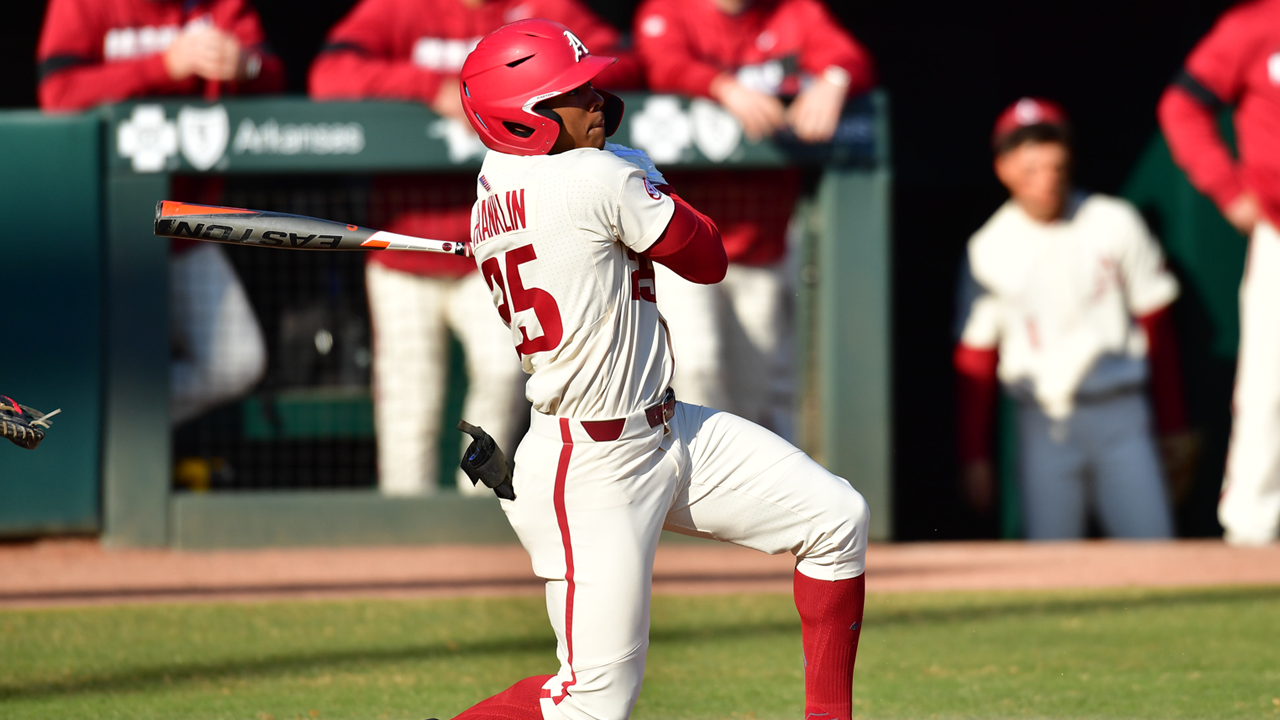 No. 7 Razorbacks Battle to Series-Opening Win Over Zags

FAYETTEVILLE, Ark. – The No. 7 Arkansas baseball team used a two-run seventh inning to push past Gonzaga and claim game one of the four game series, 7-5, on Thursday afternoon at Baum-Walker Stadium.

The Razorbacks (4-0) and Bulldogs (2-3) were tied at five after battling back-and-forth for the first six innings of the game until outfielder Christian Franklin beat out a play at first base with the bases loaded to score a run and take the lead in the seventh. After a wild pitch scored another run for the Hogs, right-handed pitchers Elijah Trest & Zebulon Vermillion tossed the final two frames of the game to secure the series-opening victory.

Seven of nine players in the Arkansas lineup recorded a hit on Thursday, with catcher Casey Opitz registering the only two-hit performance of the game. He was one of two Razobacks with two RBIs in the contest, as he and infielder Robert Moore both recorded two-RBI doubles in back-to-back innings.

Junior RHP pitcher Kole Ramage made the start in the series opener against Gonzaga, his first since April 30, 2019, and fifth of his career. The Southlake, Texas, native tossed 2.2 innings, allowing two runs on four hits with two strikeouts, exiting with the game tied at two.

RHP Kevin Kopps relieved Ramage, stranding two on base to get out of the third inning. He pitched a total 2.1 frames, allotting three runs on three hits, giving way to lefty Caden Monke, who came on at the start of the sixth with the score tied at five. Monke would earn the win after going 2.0 innings, allowing one hit & a walk, while striking out three for the first victory of his career. Vermillion picked up the save in his first outing of 2020 and his third at Arkansas.

The Hogs struck first in the bottom of the second inning thanks to the freshman Moore. A pair of singles & a walk, all with two outs, loaded the bases for Moore, who shot a first-pitch double down the left field line for his first RBIs of the year and Arkansas’ first two runs of the afternoon.

However, the Zags answered with two runs of their own in the third to tie the game after a two-run homer from Brett Harris. It wouldn’t stay tied for long as Arkansas responded with three scores to push the lead to 5-2. For the second consecutive inning, Arkansas loaded the bases, this time with one out, allowing Jacob Nesbit to send an RBI groundout to the second baseman to break the tie. Shortly after, Casey Opitz dropped a bases-clearing double in the middle of center field to increase the Hog lead to 5-2.

It was Opitz’ fifth hit in his last seven at-bats, also producing a single in the second inning.

After a triple to begin the fourth from Mason Marenco, Gonzaga got one back with an RBI groundout from Josh Bristyan to make it a 5-3 game. In the next inning, a pair of back-to-back doubles from Ryan Sullivan and Gabriel Hughes put the Zags within one, then an RBI groundout from Jack Machtolf with the runners on the corners to tie the game at five.

In the seventh, the Hogs broke the tie, plating two to take a 7-5 lead. A walk to outfielder Heston Kjerstad quickly became a bases loaded situation thanks to a single under the glove of the first baseman from designated hitter Matt Goodheart and a walk to infielder Casey Martin. From there, Franklin legged out a grounder to the second baseman to bring in the first run, then a wild pitch during Nesbit’s at-bat scored another to bring the score to its final resting place at 7-5.

The Hogs and Bulldogs return to action on Friday, Feb. 21, at 3 p.m., at Baum-Walker Stadium, for game two of the four-game set.