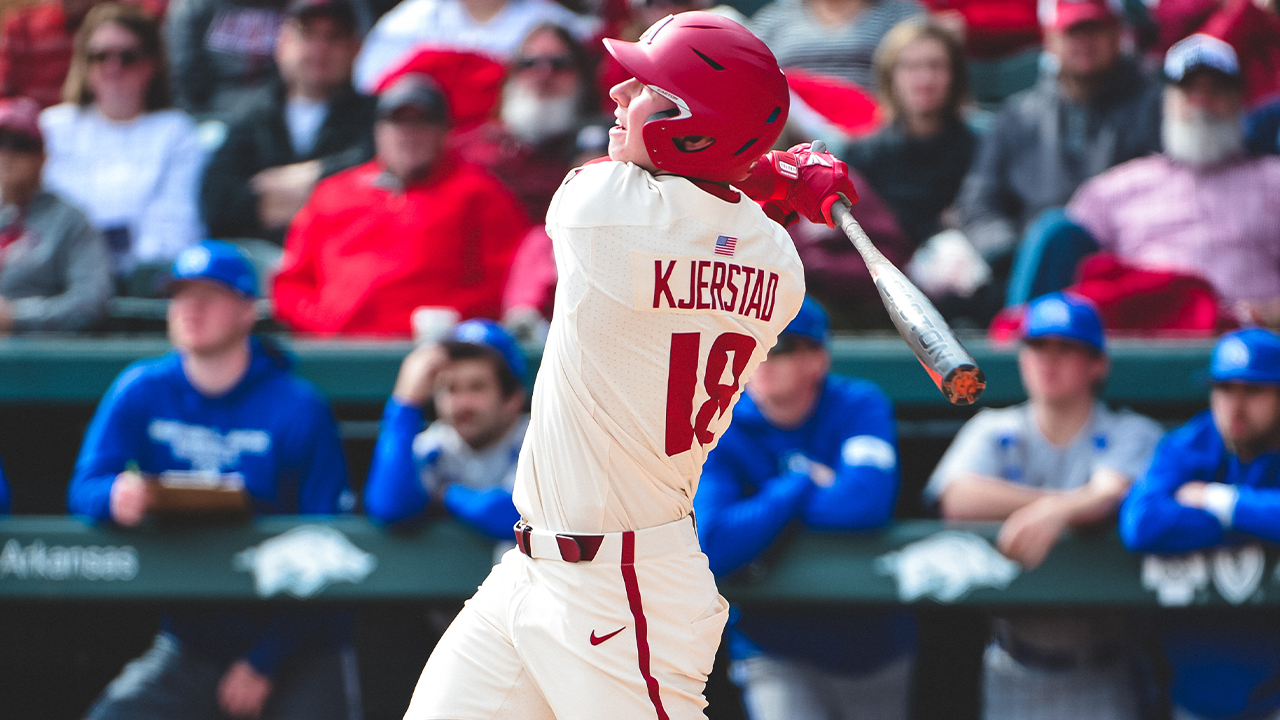 FAYETTEVILLE, Ark. – The No. 7 Arkansas baseball team tallied multiple runs in every scoring inning to put the finishing touches on a sweep of Eastern Illinois, winning Sunday’s game, 12-3, at Baum-Walker Stadium.

The Razorbacks (3-0) swept the Panthers (0-3) for the second consecutive year, improving to 32-2 in the all-time series. Arkansas totaled 27 runs on 35 hits over the three-game set, while allowing just five runs, striking out 31 at the plate.

It was another phenomenal day swinging the bat for outfielder Heston Kjerstad, who went 3-for-5 with two home runs and a double, six RBIs and two runs scored. He finished the weekend with seven hits in 12 at-bats, four , 20 total bases and 10 RBIs.

Kjerstad was one of three Hogs with three-hit games on Sunday afternoon, joining Christian Franklin and Matt Goodheart. Casey Martin and Braydon Webb also recorded two-hit performances in the finale against the Panthers.

Freshman right-handed pitcher Blake Adams made his first start of his collegiate career on Sunday. The Springdale product went 3.0 innings, allowing two runs on six hits and a walk, striking out two. He gave way to junior RHP Kole Ramage, who tossed two shutout frames, giving up just one hit with two strikeouts to earn the win.

For the third-straight game, the Hogs struck first in the opening frame, plating two for an early 2-0 lead. After a leadoff single from Webb and a walk to Franklin, Goodheart shot a one-out single up the middle to bring in the first run of the day. Then, a bunt later in the inning back to the pitcher caused an errant throw, scoring Franklin from third to make it 2-0.

The Panthers answered back in the top of the second with a run to make it 2-1. A pair of singles after a walk to Knernschield plated EIU’s first run of the afternoon, but Adams got a pop up with two away & runners on the corners to limit the damage.

Kjerstad made sure the Hogs got the run back and then some in the home half of the second, lifting a three-run moonshot over the right field wall to make it 5-1. A pair of singles from Goodheart & Martin were fulfilled by a Jacob Nesbit double to complete a five-run second inning and push Arkansas’ lead to 7-1.

In the top of the third, the Panthers used four-straight singles to plate another run, but with the bases loaded, Adams induced a 6-4-3 double play to end the inning and once again hold EIU to one score in the frame.

For the second time in three games, Kjerstad produced a multi-homer performance, unloading on a solo dinger over the visitor bullpen in right field to begin the sixth inning. It was his fourth homer of the weekend. With two on later in the inning, catcher Casey Opitz roped a two-RBI double to right field to put Arkansas in double digits for the second consecutive day.

The seventh inning opened with an error by the first baseman and a double to put two in scoring position for Kjerstad, who smacked the first pitch he saw off the bottom of the center field wall to plate two more for his 10th RBI of the series and the 12th run of the game for the Hogs.

The Razorbacks face a short week and an extended weekend as Arkansas welcomes Gonzaga to Baum-Walker Stadium for a four-game series on Feb. 20-23.