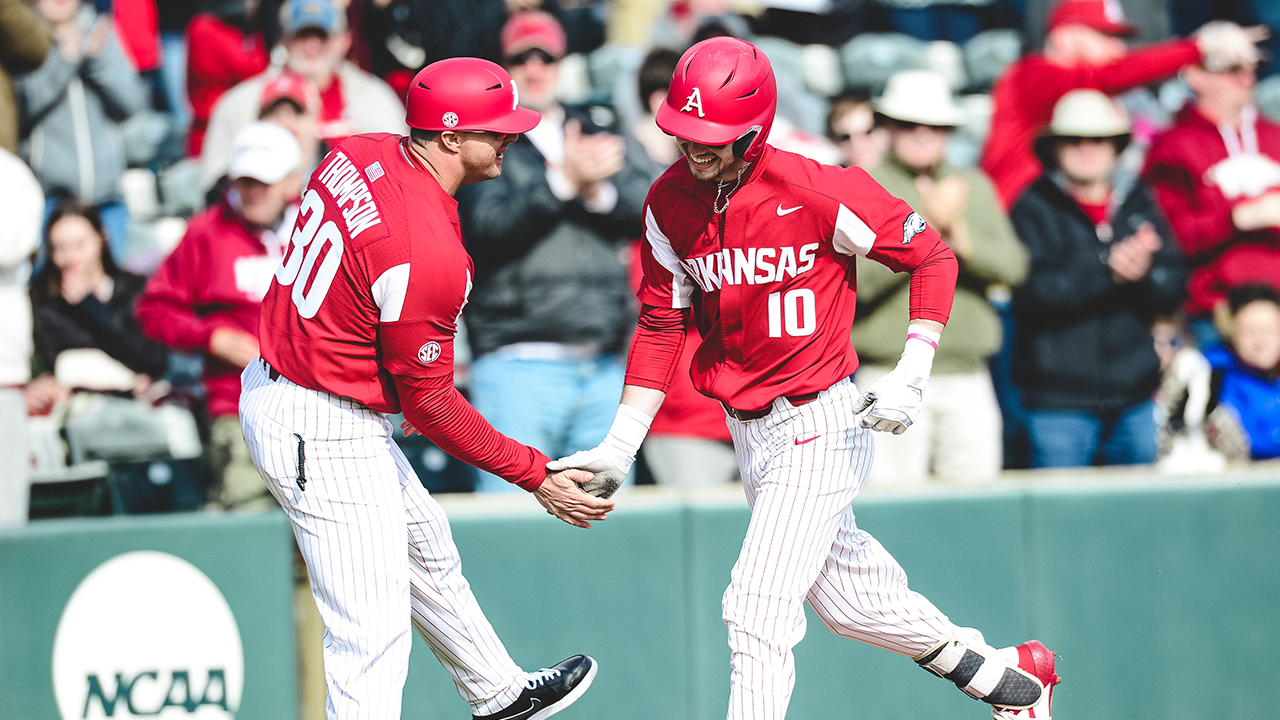 No. 7 Razorbacks Roll to 10-1 Victory Over Panthers

FAYETTEVILLE, Ark. – The No. 7 Arkansas baseball team scored three runs in the first inning and never looked back, clinching the series against Eastern Illinois with a 10-1 win on Saturday afternoon at Baum-Walker Stadium.

The Razorbacks (2-0) put together their first double-digit run & hit totals of the season, finishing with 12 knocks, including five for extra bases. The presence on the mound was powerful once again, striking out 11 with only two walks.

Sophomore left-handed pitcher Patrick Wicklander got the starting nod in the middle game of the series for the Razorbacks and picked up the win after a solid 5.0 innings. He allowed just three hits and two walks, did not allow a run and struck out seven, one shy of a career-high.

Saturday also saw the return of right-handed pitcher Caleb Bolden, who missed the 2019 season with an injury. He worked 3.0 scoreless frames, giving up three hits while striking out three. He gave way to RHP Peyton Pallette, who allowed a run on two hits, but traded said run for a 4-6-3 double play before striking out the final hitter to end the game.

Infielder Jacob Nesbit and outfielder Braydon Webb produced multi-hit games, as Nesbit posted two singles and a double. It was his 13th multi-hit performance of his career.

Arkansas kicked off Saturday’s game with a pair of homers in the opening frame for an early 3-0 lead. Braydon Webb led off the contest with a dinger off the right field pole for his first as a Razorback. After a walk to Heston Kjerstad, Matt Goodheart followed with his own home run in the same direction, landing on top of the mound in the visitor bullpen beyond right field for the two-run slam.

It marked the second consecutive game Arkansas has hit two homers in the same inning, as Christian Franklin and Kjerstad accomplished the feat in the fifth inning of Opening Day on Friday.

Franklin led off the third inning with a walk, then was moved over after Casey Martin was intentionally walked to pitch to Jacob Nesbit. The sophomore third baseman made the Panthers regret the decision, shooting an RBI single past the shortstop to give Arkansas a 4-0 lead. The exact scenario would play out again in the fourth inning, as Nesbit once again drove in a run after the walk to Martin.

Along with Nesbit’s play, the fourth inning consisted of six hits, five singles and six runs to give Arkansas double digits in the run column for the first time this season. With one out, Robert Moore, Webb, Franklin and Kjerstad delivered consecutive singles, followed by an RBI groundout from Goodheart. Cole Austin finished off the inning with a two-RBI double to left field to give the Hogs 10 runs in the game.

The Razorbacks conclude the series against the Panthers on Sunday, Feb. 16, at 1 p.m. at Baum-Walker Stadium.