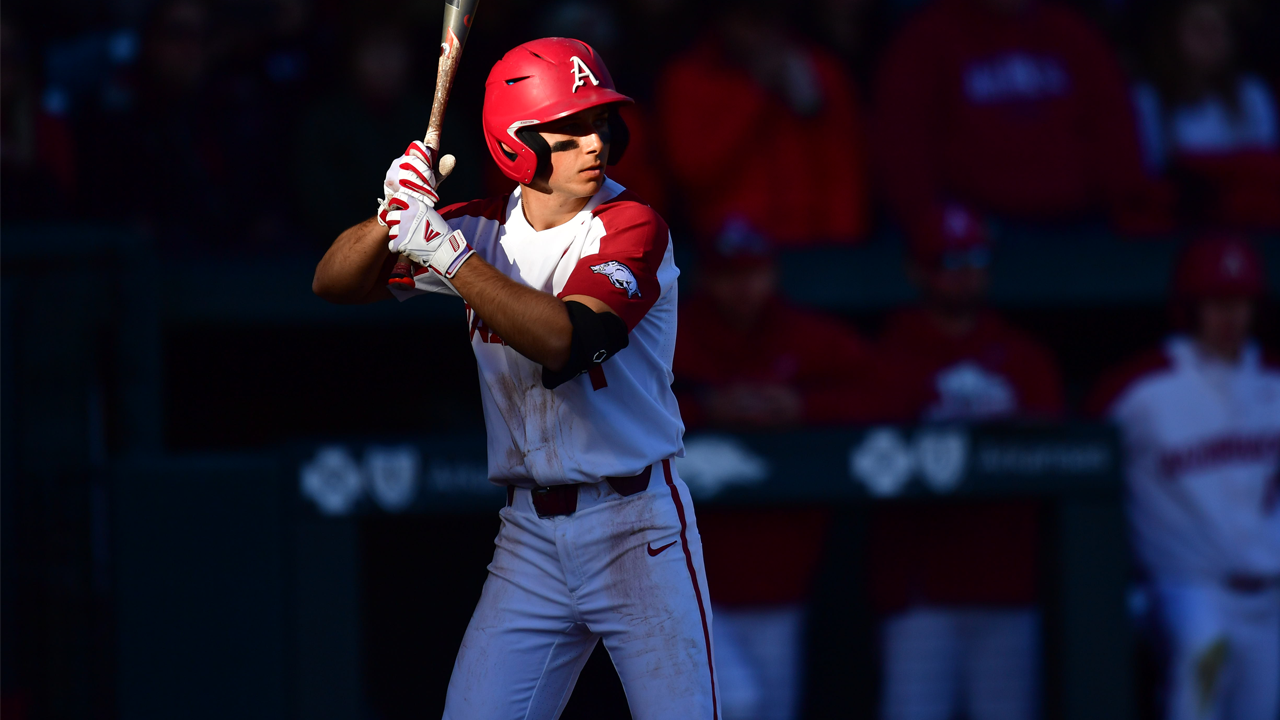 No. 7 Razorbacks Roll to 9-3 Win Over Gonzaga

FAYETTEVILLE, Ark. – The No. 7 Arkansas baseball team put up multiple runs in the fifth, sixth and seventh innings to post a 9-3 victory over Gonzaga on Friday afternoon at Baum-Walker Stadium.

The Razorbacks (5-0) improved to 2-0 in the season series over the Bulldogs (2-4), with two games left to play on Saturday and Sunday. Arkansas scored nine runs on nine hits, while allowing just three runs on five hits.

A third of the Hog’s hits in game two came from catcher Casey Opitz, who was a double away from the cycle. All three of his hits came during the fifth, sixth & seventh innings, giving him five knocks over the last two days. He was joined by outfielder Christian Franklin and infielder Robert Moore with multi-hit performances on Friday.

Sophomore right-handed pitcher Connor Noland picked up his second win of the year after tossing 6.0 innings against the Zags. He allowed three runs, two earned, on five hits, walking three and striking out three to move to 2-0 on the year. Last season, Noland didn’t earn his second win until his 11th start.

Arkansas also got three solid frames out of the bullpen, seeing RHP Marshall Denton, lefty Zack Morris and right-hander Jacob Burton combine for two walks and a strikeout over 11 batters.

After three-and-a-half scoreless innings, the Hogs finally drew first blood with two outs in the bottom of the fourth. After Goodheart was hit-by-a-pitch and moved to second, Christian Franklin shot a full-count single up the middle to score the first run of the day. He has a hit in all five games this season.

The Zags answered with a run of their own in the top of the fifth, capitalizing on a two-out error. Ernie Yake began the rally with a single, then quickly got to third after a stolen-base, throwing-error combo. It would be fulfilled by a Brett Harris single up the middle in the next at-bat to even the score.

A wild bottom of the fifth inning would ensue, as Arkansas responded with four runs to take a 5-1 lead. The inning began with a pair of singles from Opitz and Cole Austin to put two on for Moore. Then, with the infield thinking bunt and the shortstop attempting to execute a wheel play to cover third, Moore chopped an RBI single exactly where the shortstop had been playing to drive in a run. Following Moore’s at-bat, Braydon Webb reached base after his bunt couldn’t be fielded by the pitcher, driving in Austin. A wild pitch and a sacrifice fly out from Franklin gave Arkansas five runs on the day.

After the four-spot by the Hogs, Gonzaga sent a two-run homer over the left field wall to make it 5-3. However, the Hogs got the runs back in the bottom half of the inning to bring the score to 7-3. Opitz led off the frame with a triple off the right field wall, then a walk by Austin put runners on the corners for Moore, who roped a single to right field to score Opitz. It was followed by a sac fly from Webb to right field for the second run of the inning.

Opitz would finish his day at the plate with two-run dinger into Gonzaga’s bullpen to bring the score to 9-3. It was Opitz’ first homer of the year and fourth of his career.

The Hogs and Bulldogs hit the field for game three on Saturday, Feb. 22, at 2 p.m., at Baum-Walker Stadium.