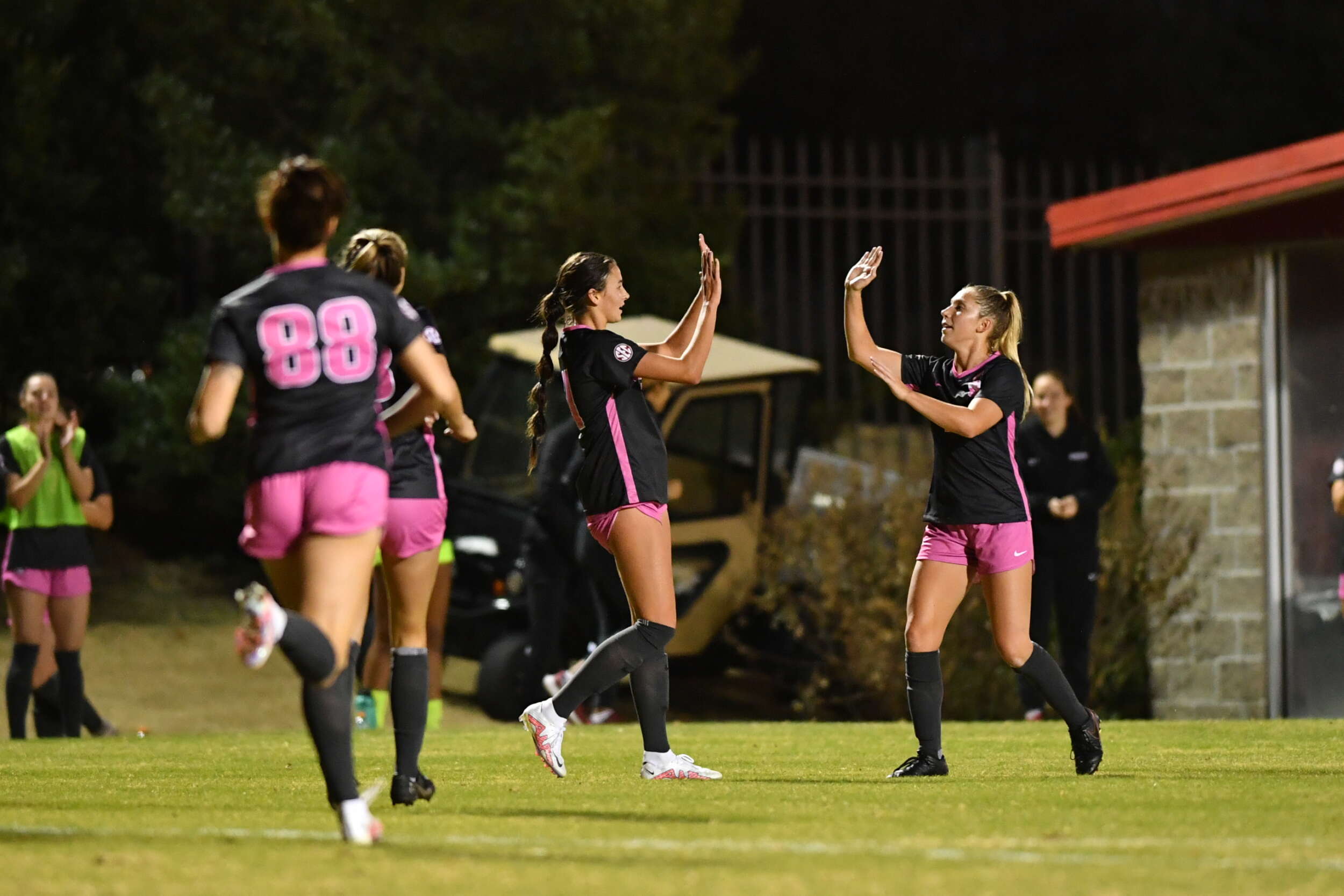 Goalkeeper Grace Barbara tallied her 11th shutout of the season, which leads the SEC. Barbara also leads the SEC in goals against average (.55).

After not scoring for 254 straight minutes, the Hogs managed to score four goals in a matter of 11:29.

Freshman Makenzie Malham kicked off her career night with the squad’s first goal 1:30 into the match. Junior midfielder Ellie Podojil served a corner kick into the box that was first touched by senior Jessica De Filippo. After more touches by both teams, Malham found the ball outside of the 6-yard box, where she fired a right-footed shot into the upper left part of the net.

Just over two minutes later, Arkansas found the back of the net again, via junior forward Ava Tankersley’s first of two goals on the evening. Freshman Zoe Susi attempted a through pass into the 6-yard box intended for senior forward Anna Podojil, however, it was intercepted by a Wildcat defender. When the defender tried to clear the ball out, it hit the back of another Wildcat and made its way back into the penalty box. Tankersley trapped the ball and then fired a powerful left-footed shot into the top of the net.

Next up, Susi netted her first collegiate goal at the 8-minute mark. E. Podojil started things off again, sending the ball into the 6-yard box, where Tankersley and Susi were running in. Tankersley got the first touch and sent it in front of the goal to Susi for the right-footed finish.

Anna Podojil closed out the first half scoring in the 13th minute with Malham and De Filippo providing the assist. After a pass at midfield from De Filippo, Malham took the ball down the far side where she sent a long cross that landed near the penalty spot. Podojil took control of the ball and after one touch, fired across the ground and past Kentucky goalkeeper Steph Stull.

“I thought it was awesome,” Susi said. “That’s been Razorback soccer that I’ve always known before I came here, and I feel like we kind of touched on that tonight so it was nice to finally feel that.”

The Razorbacks did not let up and put away two more goals in the remaining 45 minutes.

De Filippo found the back of the net in the 56th minute via Malham’s second assist on the night. A pass from Malham at the center line eventually linked with De Filippo outside the penalty box. She took the ball into the box and cut across to create space for a right-footed shot past Stull.

New Kentucky goalkeeper Tallulah Miller’s attempt to stymie a sixth Arkansas goal proved costly after she came far outside of the 18-yard box and left the net unguarded. Miller and Tankersley met outside the box for a contested ball that Tankersley got a deflection off of. She picked it up just inside the far corner of the box and scored with ease into the wide open net.

“You could see it coming a little bit,” head coach Colby Hale said. “In the past, some of the teams were kind of peaking already and this team hasn’t. We weren’t playing bad, we just were missing a few pieces. I thought some of the stuff came together. We feel like we maybe gained a little momentum heading into the SEC Tournament.”

The brace is Tankersley’s first of her career. She leads the team with 25 points.

Arkansas finished the match ahead in shots, 17-9.

The Hogs will begin postseason play at the SEC Tournament in Pensacola, Florida. Fourth-seeded Arkansas will face the No. 5 seed Vanderbilt (11-3-3, 5-3-2 SEC) on Tuesday, Nov. 1 at 7:30 P.M. CT. The match will be televised live on SEC Network.

The Razorbacks defeated the Commodores 3-0 earlier this season on Oct. 9.