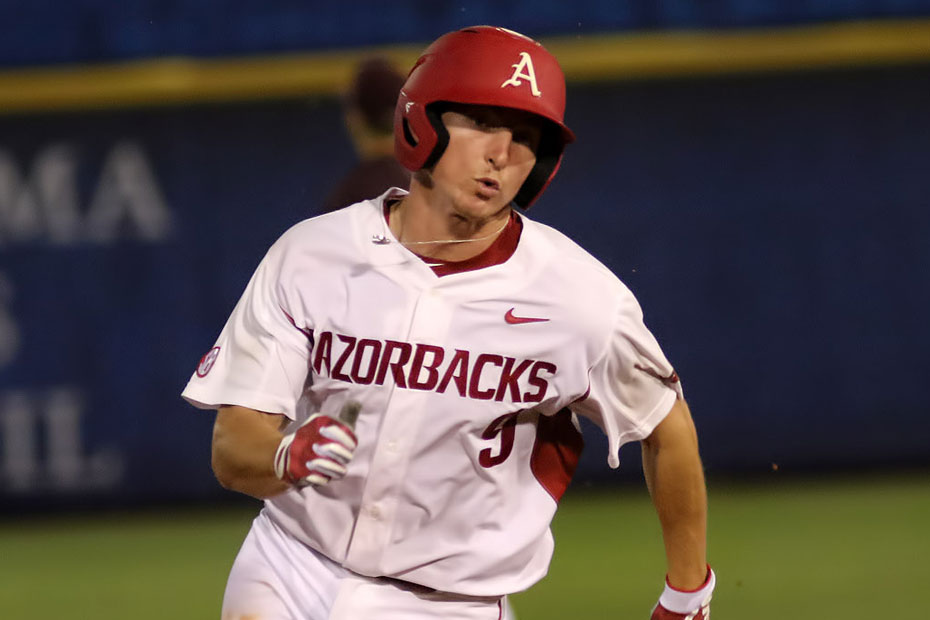 HOOVER, Ala. — It was another big offensive performance for the fourth-seeded Razorback baseball team Friday night that helped it defeat fifth-seeded Mississippi State, 9-2, and move the Hogs into the semifinals of the SEC Tournament.

It’s the second tournament semifinals appearance for the Razorbacks in the last four years and first since 2014. Arkansas advances to face top-seed Florida on Saturday. First pitch time has not been determined, but it will be after the other semifinal game between South Carolina and LSU.

Coupled with another great start on the mound by sophomore Blaine Knight, the Razorbacks scored nine runs on 10 hits against the Bulldogs, including a six-run sixth inning that provided Knight plenty of support. It was a nice bounce-back win as being sent to the loser’s bracket by Mississippi State on Thursday

Knight had a clutch performance on the mound, scattering five hits over 6.2 innings, while giving up just one earned run, a home run in the seventh, and one walk. The Bryant, Arkansas native struck out nine Bulldogs for his best performance since striking out 10 against Ole Miss on April 27 and picked up his team-leading eighth win of the year.

At the plate, sophomore Jax Biggers and junior Chad Spanberger continued their hot tournament performances as the two combined to go 5-for-8 (.625) with four extra base hits against the Bulldogs. Biggers tallied his fifth three-hit game of the year, going 3-for-5 (.600) with three RBIs, including a triple and a double.

One day after hitting three home runs in the same game, Spanberger didn’t’ get nearly as many hittable pitches as he was walked twice, but still slugged a career-high two doubles. Over his last seven games, Spanberger is 10-for-27 (.370), with all of his hits going for extra bases. Seven have been homers, including the two multi-homer games against Texas A&M (May 20) and Auburn (May 25).

Moments That Mattered
For the third-straight tournament game, Arkansas lit up the scoreboard in the first inning as Luke Bonfield singled home Spanberger to give Arkansas a 1-0 lead. Bonfield finished with two RBIs in the game as he drew a bases loaded walk later in the game.

Mississippi State did respond with a run of its own in the second inning after getting a couple of runners on by singles. Biggers committed a throwing error on an attempted double play, which later led to the run, but it ended up not hurting Knight on the mound in the long run.

Knight followed the unearned run allowed to strike out seven over the next five innings before being relieved by Jake Reindl. Before giving up the home run to Cody Brown in the seventh inning, Knight had retired 15 of the last 18 batters he faced since the second inning and had not allowed an extra-base hit over that span.

Arkansas’ bats remained fairly quiet after the single run first inning, but they found life in the sixth starting with Dominic Fletcher’s solo home run over the right field wall. Fletcher needed to see just two pitches from Bulldog starter Jacob Billingsley before unloading his 11th home run of the year to break the 1-1 tie.

Fletcher is now two home runs away from tying the Arkansas freshman record for home runs in a season previously set by Zack Cox (13) in 2009.

The home run was just the start of a six-run sixth inning for the Hogs that broke the game open. Arkansas batted around in the inning tallying six hits, four for extra bases. Biggers drove in the second run of the inning when he tripled home Carson Shaddy to make it 3-1. It was Biggers’ third triple of the week, a tournament record, and fourth of the season.

With a big lead, Reindl finished off the game on the mound, keeping Mississippi State hitless over the final 2.1 innings and setting down seven-straight batters.

Up Next
Four-seed Arkansas continues its run through the SEC Tournament on Saturday when it faces Florida for a spot in the SEC Tournament championship. First pitch is to be determined, but will be sometime after LSU faces South Carolina, which is the first semifinal game of the day.