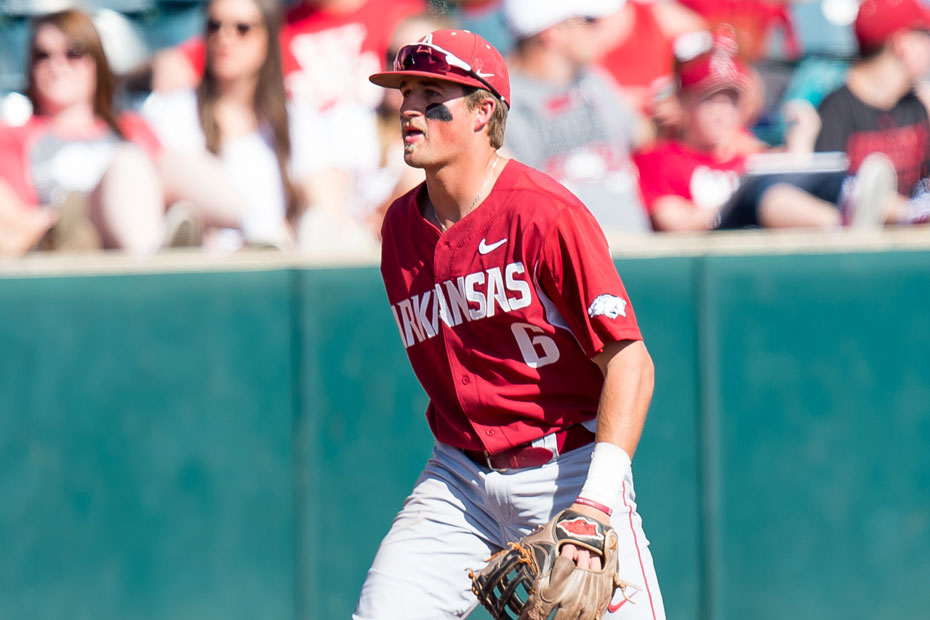 FAYETTEVILLE, Ark. – Arkansas’ bats were nearly silent on Sunday in the series finale with Rhode Island. The Hogs only managed three hits off Rams’ starting pitcher Matt Murphy, dropping their first game at home this season, 3-0, at Baum Stadium.

Arkansas (12-4) still claimed the series victory after winning both ends of a double-header Friday night with the Rams (6-8). The Razorbacks have won three straight series at Baum Stadium to open the year and are, currently, one of five teams in the conference with one loss or less in its home stadium. This year marks the third straight that Arkansas has won its first three weekend series at home.

Third baseman Hunter Wilson had two of Arkansas’ three hits in the game as it capped a tremendous weekend for the sophomore. In his last 10 at-bats, he has seven hits, all singles, including two RBIs. On Friday, in game two of the doubleheader with Rhode Island, the Spiro, Oklahoma native went a perfect 3-for-3 at the plate, his first three-hit game of the year and first of two straight multi-hit games.

Redshirt senior pitcher Josh Alberius made his third start of the year, going five innings on the mound and allowing three earned runs on seven hits with three strikeouts. Alberius struggled through the first two innings, giving up three straight hits to start the game, including a two-RBI double. Then, in the second, he gave up a solo home run, which made it 3-0 in favor of the Rams.

After the homer, he settled down and retired 11 of the final 14 batters he faced. Alberius has been used in many different roles so far this year. His last three appearances have been starts, but he’s also been one of the Razorbacks’ most effective arms out of the bullpen.

In his three non-starting appearances this year, Alberius has held opponents to just two hits in 5.2 innings, while striking out seven. He’s allowed no runs across in those innings and is one of only two Hog pitchers with five or more innings pitched and no runs allowed out of the bullpen.

After starting the first two weekends, Kopps has made three straight appearances out of the bullpen and has yet to allow a run. He’s thrown six innings and struck out only four, but has allowed just six baserunners in those three appearances.

Arkansas now focuses on the two-game midweek series with Alcorn State, which starts on Tuesday at Baum Stadium. Due to forecasted cold temperatures in the area on Tuesday, the start time for the series opener has been moved up from 6:30 p.m. to 3 p.m. Wednesday’s game between the Braves and Hogs will still be played as scheduled at 3 p.m. Both games will be televised on SEC Network+ and broadcast on the radio on the Razorback Sports Network.