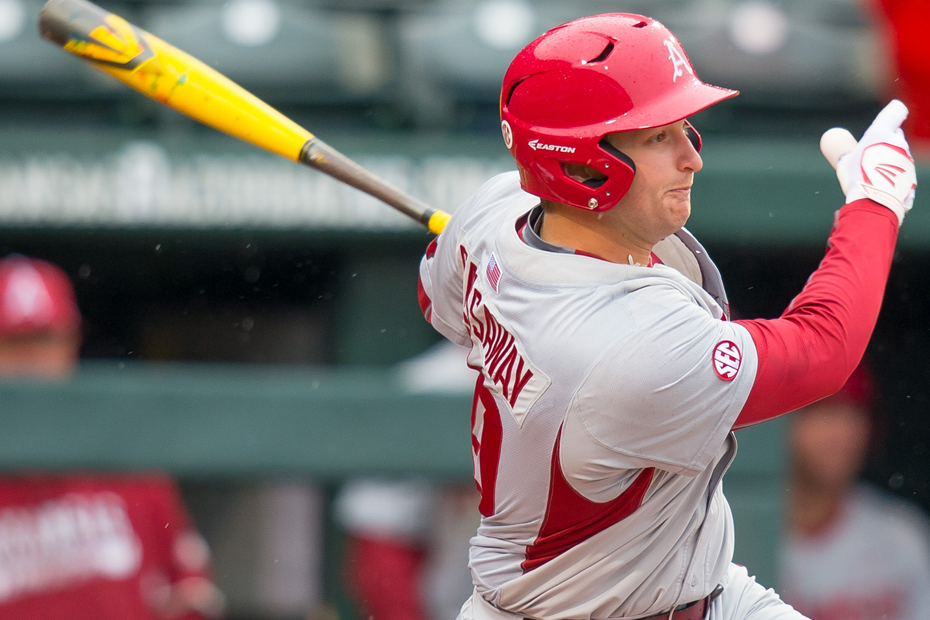 MEMPHIS, Tenn. – The 21st-ranked Razorback baseball team scored early and scored often during Wednesday night’s midweek matchup against Memphis at AutoZone Park. Twelve runs were scored on 16 hits as five different players notched two hits or more for the Razorbacks in the 12-4 victory, their 20th win of the season.

It was a big night for the Hogs’ four through eight hitters in the lineup as the five players went 12 for 23 (.522). Along with Gassaway and Koch, Rick Nomura and Michael Bernal contributed two hits each in the game and Luke Bonfield added a big home run in the second.

Starting pitcher Isaiah Campbell went 2.2 innings for the game, holding the Tigers scoreless and giving up only two hits with two strikeouts. Reliever Hunter Hart earned his first victory of the year, pitching a flawless sixth and seventh inning with four strikeouts, tying a career-high.

Arkansas’ biggest inning came in the second when four runs crossed the plate to give the Razorbacks a five-run lead. The Bonfield home run came early in the inning with nobody on and one out to start the run. It was Bonfield’s fifth home run of the year, which ties for the second highest total on the team.

The Hogs followed the home run with a single from Bernal, an RBI double from Koch, an RBI single from Eagan and then an unearned run after Carson Shaddy reached on an error, one of four errors in the game for Memphis.

Arkansas went on to add one run in the fifth followed by two runs each in the sixth, seventh and eighth innings as the offensive production was spread out through the lineup. Only Eagan came away with a multi-RBI game, finishing with two RBIs, his sixth multi-RBI game this year and 14th of his career.

Arkansas head coach Dave Van Horn hinted at changing up the pitching this week starting with Wednesday’s game against Memphis. When Campbell was relieved in the middle of the third inning with two runners on base, Van Horn called in junior Dominic Taccolini to get the Hogs out of the jam.

Taccolini did his job by striking out the inning’s final batter and went on to pitch another full inning, giving up two runs on two hits and striking out three.

After Taccolini, Josh Alberius had another solid showing, tossing just one inning but allowing only one hit, extending his streak of innings without an earned run to 15.1.

Arkansas remains on the road for this weekend’s Southeastern Conference series when it travels to Oxford, Mississippi, to face Ole Miss for a three-game series starting Friday. First pitch for game one is set for 6:30 p.m. CDT and will be televised on SEC Network+. Saturday and Sunday’s games will both be on the SEC Network and first pitch is set for 7 p.m. and 12 p.m., respectively.

“We got off to a good start and that was good to see. The freshman (Isaiah) Campbell went out there and got us through the first inning pretty quick and scored the first run. They made a couple of mistakes in the fourth by kicking a couple of balls. We got some timely hits and just took advantage of some things. I think there were a few wild pitches in there and a pass ball, then we jumped out to a five-run lead. We haven’t had a lead for a while it seems like. It gave us an opportunity to go out there relaxed and throw some different guys.” – Arkansas head coach Dave Van Horn on the 12-4 win over Memphis

“It seems like all of our games the last two or three weeks have been really tight except for Sunday’s game against Missouri, which got away from us. You look at the Oklahoma State game, where we lost 5-4, and had the bases loaded twice with less than two outs and didn’t score a run. Tonight we got some big hits and punched in some runs to keep adding to the lead. It was nice to get out on them and score some runs.” – Dave Van Horn on grabbing a big lead early against Memphis and holding it throughout the game

“We’re in good shape as far as our pitching arms go in being fresh. We’re going to throw a couple new arms this weekend. We’ve had a couple of guys that have thrown the last two weeks that haven’t gotten us out of the second inning, so we’re going to mix it up and throw some different starters and see if it helps us at all.” – Dave Van Horn on his pitching for the weekend against Ole Miss

“When you score runs like that, it gives your pitcher the opportunity to relax. We hadn’t swung the bat like that in a while and it was good to see.” – Dave Van Horn on the Razorbacks’ 12 run, 16 hit output against Memphis