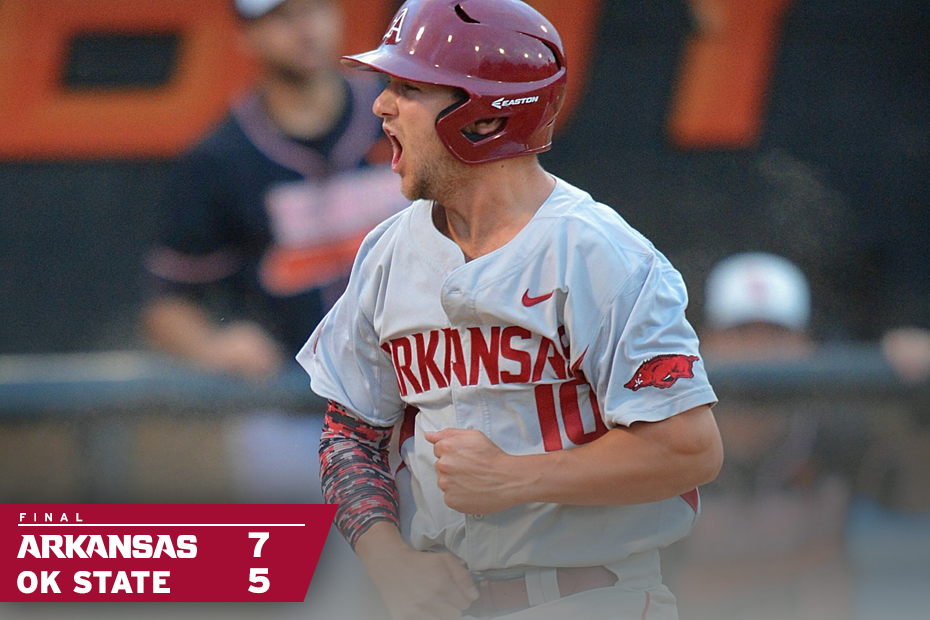 STILLWATER, Okla. – The second-seeded Arkansas Razorbacks (37-22) continue to deliver come-from-behind postseason victories, this time using a five-run eighth inning to post a 7-5 victory over No.1 seed Oklahoma State (38-19) and advance to the Stillwater Regional final.

Arkansas advances to its sixth consecutive NCAA Regional final and will play on Sunday at 6 p.m. against the winner of the Oklahoma State vs. St. John’s game. Television coverage will be determined after the conclusion of Saturday’s games around the country.

The Razorbacks entered the eighth inning trailing 4-2 but plated five runs in the frame to take the lead. Carson Shaddy pinch hit to lead off the inning and battled through a nine-pitch at bat to earn a walk. A single from Joe Serrano, a throwing error and wild pitch later and Arkansas had tied the game. When the damage was finally done, Arkansas had scored five runs on three hits, two walks, two errors, a stolen base and a wild pitch.

Serrano set the table from the leadoff position, reaching base four times. He had three base hits including his 11th double of the season.

Zach Jackson earned the save with two innings and just one unearned run. Five of the six outs he recorded were strikeouts.

The win marks the third come-from-behind victory in Arkansas’ past four NCAA Tournament wins. The Razorbacks also defeated Florida in this year’s SEC Tournament despite trailing in the ninth inning.

• The Razorbacks are in the midst of their 28th NCAA Regional in program history, including the 14th consecutive.

• Arkansas improves to 68-58 all-time in the NCAA Tournament and 50-39 in NCAA Regional action.

• The Razorbacks have advanced to their sixth straight NCAA Regional final.

• Three of Arkansas’ past four NCAA Tournament wins have been come from behind victories.

• The Razorbacks have won 12 of their past 16 games away from home.

• Joe Serrano added his 16th multi-hit game, the 63rd of his career, and his third three-hit performance of the season.

• Tyler Spoon collected his 13th multi-RBI game of the year.

• Zach Jackson claimed his seventh save and has 77 strikeouts in just 51 innings.