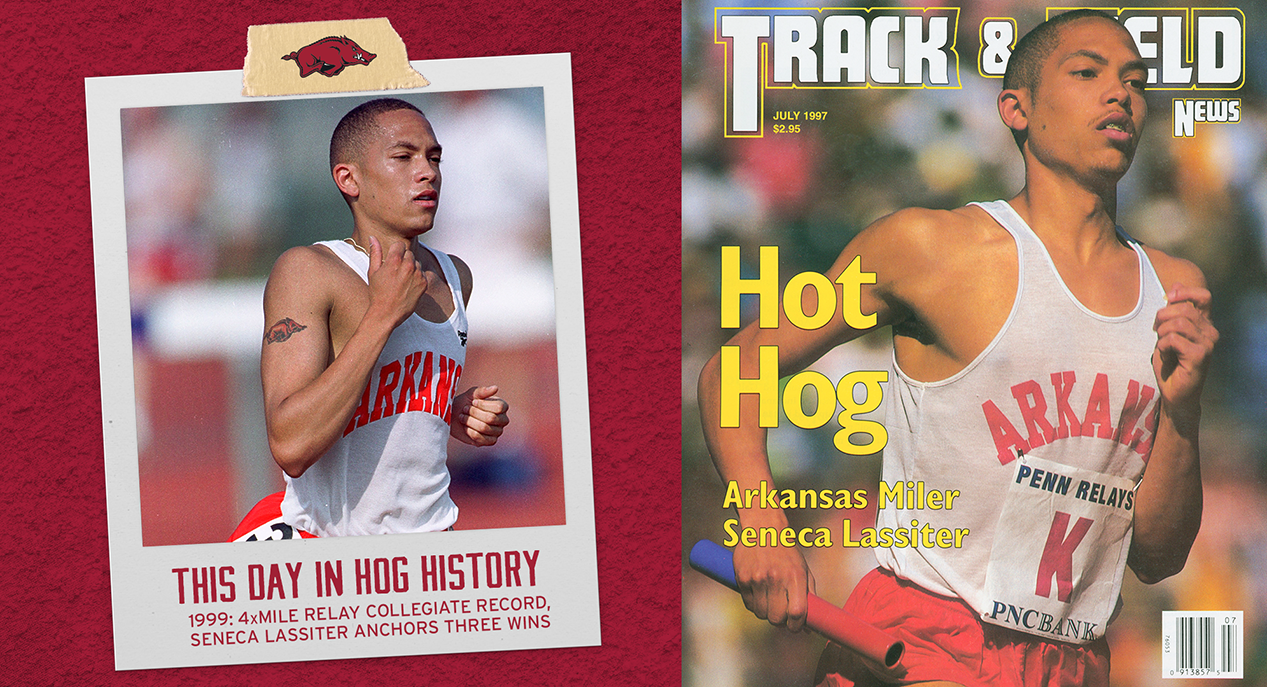 Arkansas has produced numerous historic moments among 43 titles the Razorbacks collected at the famed Penn Relays.

On this day, April 24, 1999, Arkansas senior Seneca Lassiter became the only Razorback to be part of three winning relays in the same Penn Relays weekend.

Lassiter, who totaled seven relay titles in his Arkansas career, anchored the 4xMile to a collegiate record of 16:07.96 with a still standing fastest mile split (3:55.6) in Penn Relays history, and anchored the Razorbacks to their first ever 4×800 title.

During the 125th running of the Penn Relays in 2019, Lassiter was inducted into the Penn Relays Wall of Fame. He joined a very elite and uber-talented group of men – Larry James and Marty Liquori – who had won Penn Relays championships at all three levels – high school, college, and Olympic development.

During the 1999 Penn Relays, after anchoring the winning distance medley relay on Friday, Lassiter expressed what it meant to represent the Razorbacks at the Penn Relays and the goal he had for the final day when he would anchor the 4xMile followed by the 4×800.

“It’s not important for me to leave a mark,” Lassiter said in a Philadelphia Inquirer article. “It’s important to me wearing an Arkansas jersey to win every time on the track. It’s my last year and I want to do well. The most important thing is to run the relays.

In accomplishing that goal, Lassiter saluted the crowd by raising the baton in the final turn of the 4×800, noting: “I’m never one to boast or anything, but I did that because it was my last relay race in an Arkansas jersey, and the crowd has been so good to me over the years.”

Following is an excerpt from an article by Ron Reid in the Philadelphia Inquirer on April 25, 1999.

Precedent, the record book and anyone who ran against Arkansas took a recurrent beating yesterday at Franklin Field before 44,639 sun-drenched spectators delighting in the 105th Penn Relays.

Arkansas was the biggest headliner, nailing two more relay titles on getaway day to tally three for the week, mostly because the Hogs had a leading man named Seneca Lassiter.

Thanks to his extraordinary anchor leg, the Razorbacks team that included Sharif Karie, Mike Power and Matt Kerr rampaged past its rivals to a record-shattering performance in the seldom-raced 4 x mile relay.

As the crowd roared its approval when it wasn’t awestricken in silence, Lassiter powered his way through the swirling Franklin Field winds and the loneliness of a long distance runner with a 50-meter lead.

He lapped two runners and completed the last mile in 3:55.6, a magnificent closing act that enabled the Razorbacks to stop the timer at 16:07.96 and break the former collegiate standard of 16:08.9 set 37 years ago by Oregon. The Hogs also wiped out the old Penn Relays record of 16:10.6 established by Villanova in 1974.

“This is by far my best meet, and that’s my fastest anchor,” said Lassiter, who ran unchallenged from his first stride to the last. “Into the wind and by myself.”

Arkansas coach John McDonnell said the wind was too much of a handicap for the team to achieve its goal of breaking 16 minutes or approaching the world best for the distance – 15:49.08 by the 1985 Irish national team of Eamonn Coghlan, Marcus O’Sullivan, Frank O’Mara and Ray Flynn. (Note: The Razorback performance ranked fifth on the all-time world list.)

Lassiter and Karie had about three hours to recover before they were due to run the 4×800 relay, but the Hogs’ anchor man was undaunted. “It won’t be hard,” he said. “I’ve done it before. We train to come back.”

And come back the Hogs did, with a 20-meter margin of victory and a 7:13.88 winning time in the 4×800 relay, a race they allowed to be competitive for just about three minutes. (Note: Arkansas’ performance was the fastest time at the Penn Relays in the past 14 years and ranked the Razorbacks seventh on the all-time collegiate list.)

Karie took the stick from Ryan Stanley and proceeded to turn a 25-meter deficit into a 10-meter lead that James Karanu extended farther, with a 1:46.3 leg that was the fastest of the race.

Lassiter anchored easily in 1:48.9 and raised his arms in triumph over the final four meters of his last Penn Relays race as a Razorback to thunderous applause. It was a historic moment, not only raising Arkansas’ total of championship relay victories to 32 but giving the Razorbacks their first win the 4×800.

“This puppy has eluded us a long time,” McDonnell said. “I’m very happy with the whole week. We have an exceptional bunch of guys.”

Lassiter was no less delighted with his third victory of the meet.

“It was my last relay as a Hog,” Lassiter said. “I wanted to go out with a bang.”

A week before the Penn Relays, running the 1,500m in 40-degree weather at the Tyson Invitational in Fayetteville, Lassiter recorded a personal best of 3:37.23 with the then collegiate record of 3:35.30 by Sydney Maree a goal during his senior season.

Following are Arkansas’ winning 4xMile relay orders and splits at the Penn Relays.

Note: Arkansas’ 4×1500 Penn Relays info will appear in another On This Day feature.